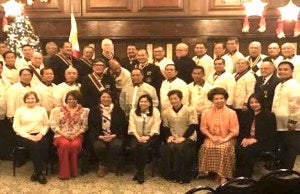 NEW YORK CITY– A recitation of excerpts from Dr. Jose Rizal’s “Mi Ultimo Adios” in Filipino by a Knight of Rizal and a Filipino American seventh-grade student and musical numbers by a new chorus were among the highlights of the commemoration of the Philippine national hero’s 120th death anniversary.

The anniversary of Rizal’s martyrdom was marked by ceremonies at the Philippine Consulate’s Kalayaan Hall, hosted by the consulate and the Knights of Rizal-New York Chapter (KoR-NY). Rizal was executed by firing squad by order of the Spanish colonial authorities on Dec. 30, 1896. 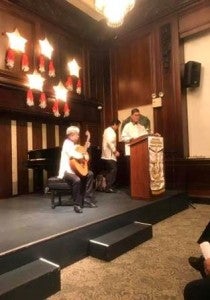 Guests included Rose Torres-Javier, great-great-grandniece of Rizal, members of the Ladies for Rizal, former Philippine Ambassador to Italy and South Africa and KoR member Virgilio Reyes, community members, and representatives of other Knights of Rizal chapters in the US Northeast. 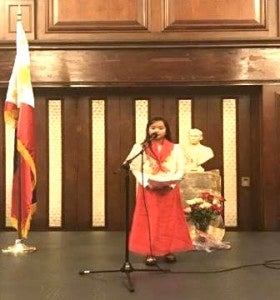 Also marking the commemoration were musical numbers by the newly established KoR-NY Male Vocal Ensemble under the direction of KoR member and classical music performer Rogelio Peñaverde, reflections, and remarks by members of the Knights of Rizal. Several new members of the KoR were knighted at the ceremonies.

Consul General Theresa Dizon-de Vega read one of Rizal’s last letters to his family and offered a commentary on the challenge that the legacy of Rizal poses for all Filipinos – that of placing others, community and country above parochial and personal concerns.

Dizon-de Vega also gave the various KoR Chapters in the US Northeast copies of the book Rizal Without the Overcoat by Prof. Ambeth Ocampo.

MORE STORIES
The Future of the US iGaming Industry 2022
Why Hiring Digital Marketing Services Is a Must In 2022
A Beginner’s Guide to Buying a Vacuum Cleaner in 2022
Don't miss out on the latest news and information.