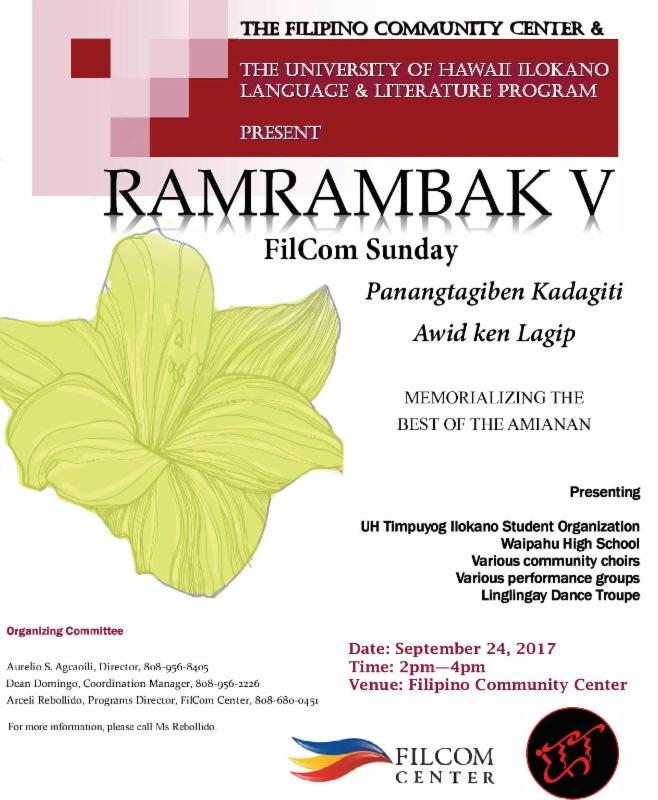 HONOLULU — A cultural showcase featuring songs, dances and snippets of dramatic performances will highlight Ramrambak 5, a FilCom Sunday event that has become a tradition in Waipahu.

Ramrambak is an Ilokano term that translates to “celebrations.”  The two-hour cultural celebration to be held at the FilCom Center Ballroom will begin at 2 p.m. on September 24 at the Filipino Community Center.

Donnie Juan, executive director of the Filipino Community Center, and Dr. Gina Jamoralin, consul general of the Philippine Consulate General in Honolulu, will open the celebration.

First organized in 2012 when Rose Cruz Churma was president and CEO of the Filipino Community Center in Waipahu, the September event is on its fifty year.

The cultural showcase has been organized by Aurelio S. Agcaoili, program coordinator for Ilokano at the University of Hawaii at Manoa, with Prof. Dean Domingo, instructor of the UH Manoa Ilokano Program, serving a coordination manager.

Arceli Acosta, director of programs of the FilCom Center, has provided logistical and administrative supportive and organized the selling of bentos and native food in a fiesta-like atmosphere.

Timpuyog Ilokano Student Association will also feature an exhibit of material culture of the Amianan people. The exhibit will include abel of all kinds, rare and old books, baskets, and other artifacts.

Students of the UH Manoa Ilokano Program will be on standby to explain the context and uses of these artifacts. The program is open to the public.