‘Comfort Women’ monument to be unveiled in San Francisco

‘Comfort Women’ monument to be unveiled in San Francisco 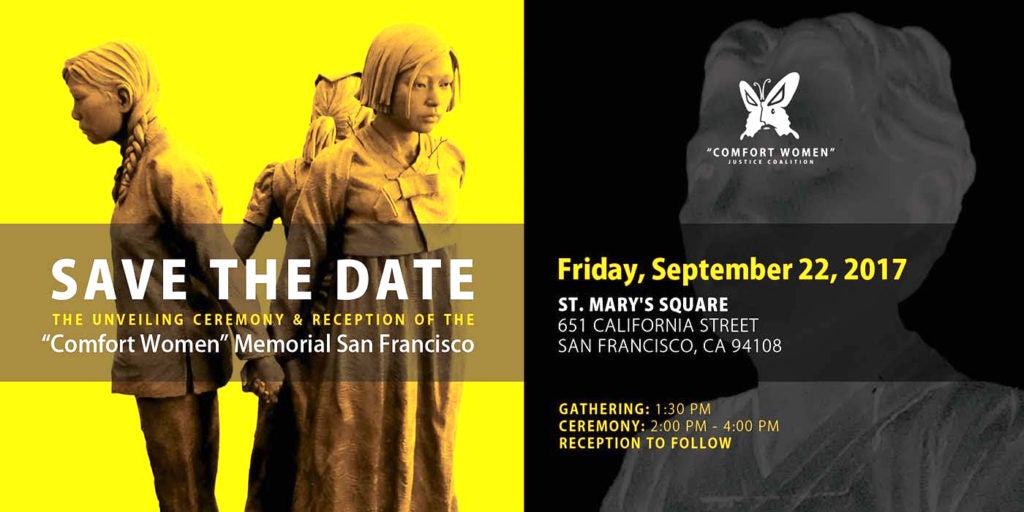 SAN FRANCISCO — A monument to “Comfort Women” will be unveiled here on September 22, with organizers expecting the Japanese government to protest the installation.

A similar “Comfort Women” statue went up in Glendale, California in 2013, and the Japanese government joined the lawsuit in the U.S. Supreme Court demanding its removal, saying relations with the U.S. would be severely impacted.

The lawsuit was thrown out but the political battle continues with the new South Korean president rejecting Japan’s claims that Japan has made proper restitution to the “comfort women.”

“It may be 2017, but Japan is still fighting to deny and erase this egregious war crime and basically waiting for all the ‘comfort women’ to die, so they don’t need to acknowledge the government’s responsibility,” say CWJC co-chairs and retired Judges Lillian Sing and Julie Tang.

“Comfort women” were hundreds of thousands of women during 1930s and World War II who were captured and used as sex slaves by the Japanese military.  Japan constructed “Comfort Stations” where the soldiers stood in line waiting their turn to rape the women.

The women were mostly from China, Korea and the Philippines but a few thousand more were from over a dozen other countries which included Dutch Indies, Great Britain and the United States.
Congressman Mike Honda and former “comfort woman” Grandma Yongsoo Lee from Korea will attend the unveiling of the monument.

WHAT
The unveiling ceremony of the historic San Francisco “Comfort Women” Monument. Open to the public.  Media is required to register in advance to secure space. Please register at [email protected]