Hate attacker of Filipina in NY nabbed, was on parole after killing his mother

Hate attacker of Filipina in NY nabbed, was on parole after killing his mother 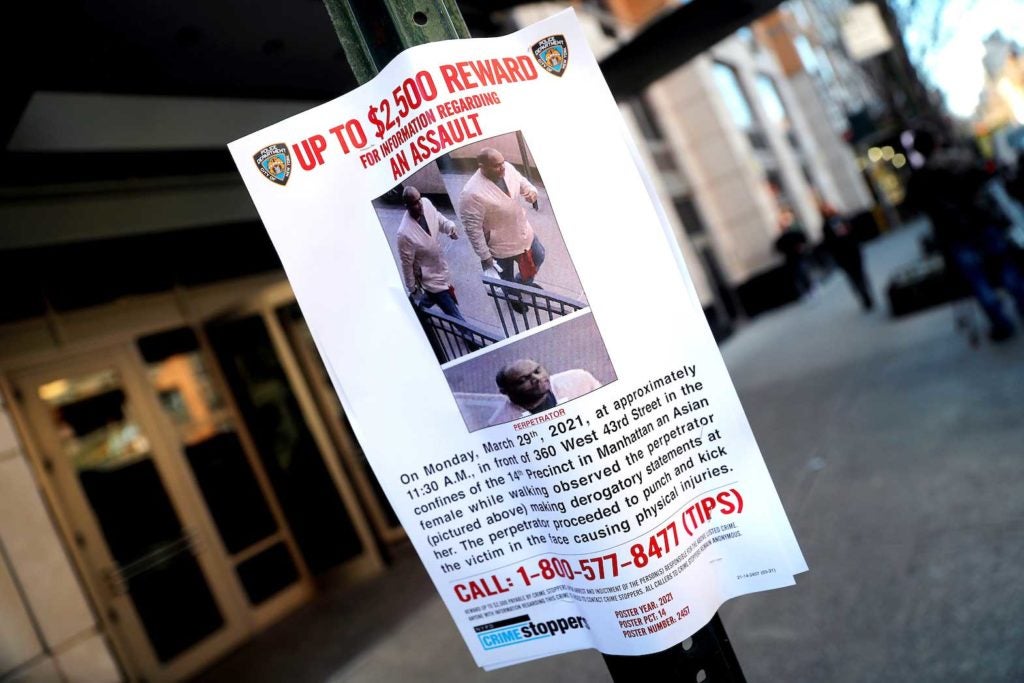 NEW YORK – New York City police on Wednesday arrested a convicted murderer on charges of attacking a 65-year-old Asian woman on a street, an assault captured on a video that went viral amid a rise in anti-Asian hate crimes in the United States.

Brandon Elliot, 38, was identified as the man seen in the video kicking Vilma Kari, the woman to the ground and then kicking her several more times on Monday near Times Square in midtown Manhattan, the New York Police Department said in a statement.

Elliot, who was on lifetime parole after serving a prison term for murdering his mother, faces several assault and hate-crime charges, police said. The NYPD said its Hate Crimes Force had been looking for the assailant since Monday afternoon. Police have said the assailant was heard making anti-Asian statements during the assault.

Police have said the woman who was attacked sustained a serious physical injury but did not offer further details in its statements.

The incident was part of an increase in hate crimes reported against Asian Americans during the COVID-19 pandemic. Former President Donald Trump often referred to the novel coronavirus as the “China virus” and the “China plague.”

Such crimes rose by 149% in 2020 in 16 major cities compared with 2019, according to the Center for the Study of Hate and Extremism at California State University, San Bernardino.

Concerns over anti-Asian hate crimes were heightened when six Asian women were among eight people fatally shot this month at Atlanta-area spas. A 21-year-old man was charged with the murders. Police have yet to determine a motive.

President Joe Biden’s administration on Tuesday announced a set of measures responding to anti-Asian violence in the United States, including deploying $49.5 million from COVID-19 relief funds for U.S. community programs that help victims.

In Monday’s attack in New York, a security video showed witnesses inside the lobby of a building apparently watching the assault but making no effort to help the woman. One man shut the front door while the attacker walked away.

The Brodsky Organization, which owns and operates the building, said it has suspended two employees while it and an employees’ union investigate their response to the attack.

“We take this situation very seriously, and are committed to strengthening internal training, and working with our community to ensure the safety of our residents and neighbors,” the Brodsky Organization said in a statement.

New York police also are investigating an assault last week on a subway train against a young man who appeared to be Asian. The attack was captured on another widely viewed video. Police Commissioner Dermot Shea said the man, who was left unconscious after he was pummeled and choked, has yet to report the crime.

“We have made a lot of headway in that crime,” Shea said on PIX-11 TV. “I can’t get into the specifics. We ask anyone with information to please come forward.”