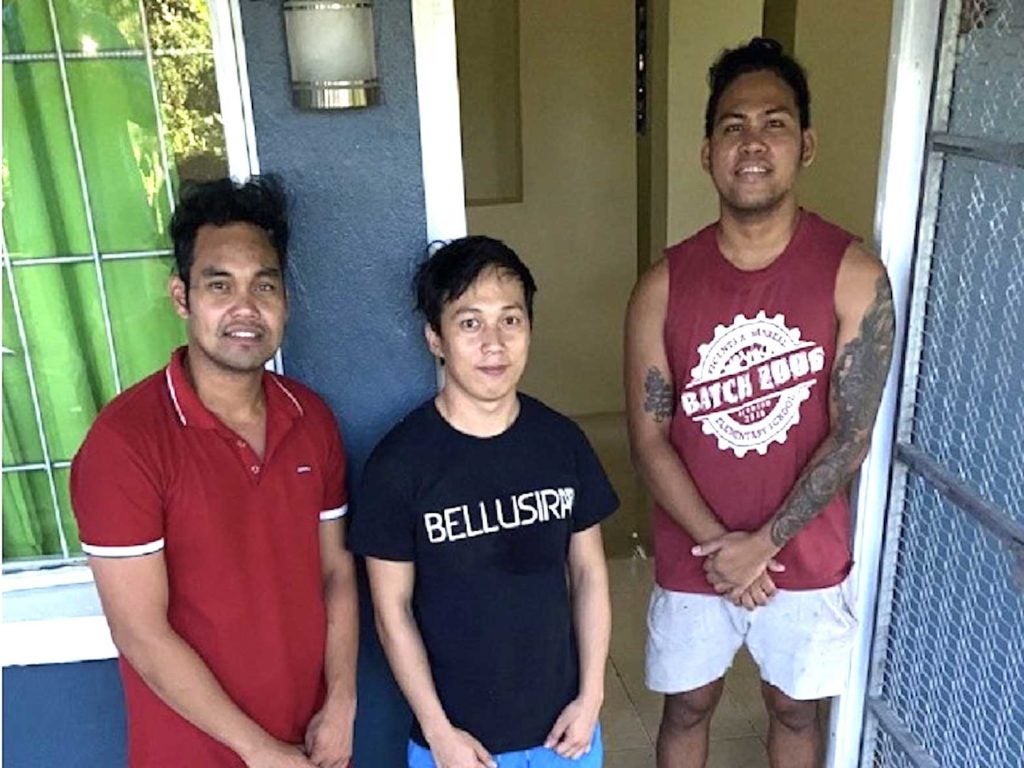 John Lyod Restauro, Janjan Bantilan and John Kenneth Kadusale, were allegedly abandoned late at night with no access to food, transportation, or accommodations, leaving them instantly homeless and jobless in Fiji. CSN

The Victoria Filipino-Canadian Association’s online petition via change.org alleges that 20 Filipino seafarers were scammed into traveling to Fiji by Goundar Shipping. The seafarers were employed to operate and maintain Goundar’s passenger and cargo ships, but the company reportedly did not give them the promised salary, proper working conditions and fares for return flights.

George Goundar, the managing director of the eponymous shipping company in Fiji, was a former BC Ferries employee. The petition also states that Goundar has had several high profile business dealings in British Columbia, including the sale of the Queen of Prince Rupert, Queen of Chilliwak, and most recently the Queen of Nanaimo.

The alleged scam and human trafficking of Filipino workers in Fiji had been going on for a while such that by February 2021, many of the crew were 18 months over their contracts. The workers wanted to go back to the Philippines, but they could not afford their own return flights.

“Not content with underpaying these workers by as much as 70% of what they promised them, Goundar Shipping has been keeping them as virtual slaves by refusing to send them home as agreed,” charged Sarah Maguire, an International Transport Workers’ Federation (ITF) inspector working on the case.

“It is deeply disturbing to think BC Ferries’ once proud vessels are being used for human trafficking,” the VFCA alleges in its petition.

George Goundar, in an interview in 2019 with Fiji Sun, expressed the need for more seafarers in Fiji, as his company expanded shipping operations.

“The biggest problem in Fiji is that we do not have seafarers. We have so many vessels coming and I am short of 120 employees,” he said. https://fijisun.com.fj/2019/06/26/shipping-tycoon-george-goundar-invests-24-million-into- 9-passenger-vessels/

It was also in 2019 that the Maritime Safety Authority of Fiji’s Acting Chief Executive Officer, Captain Philip Hill said Goundar and his company’s ways and process of getting Filipino seafarers was “wrong,” that he should first discuss with the authorities the processing needs for Filipino workers in Fiji.

“There is no other shipping company that’s operating that is complaining about the shortage of seafarers, only his company,” Hill said. Hill also explained there was more than enough registered seafarers in Fiji but the company’s needs and conditions were not up to par with employment regulations.

The petition claims Filipino seafarers all the way from the Philippines were duped into working in Fiji at Goundar Shipping. When three former employees said they wanted to speak to  union representatives about their rights and working conditions, they were fired, the petition alleges.

Instead of being provided with return flights as promised, the fired workers, John Lyod Restauro, Janjan Bantilan and John Kenneth Kadusale, were allegedly abandoned late at night with no access to food, transportation, or accommodations, leaving them instantly homeless and jobless in Fiji.

The VFCA is urging the Fijian government punish Goundar Shipping for unethical labor practices and human rights violations and to suspend its operating licenses until it compensates the Filipino workers for  unpaid wages and pay for their return flights home.

The Victoria Filipino Canadian Association (VFCA) is a non-profit organization established on February 10, 1969 to  help new immigrants from the Philippines to adjust to the Canadian way of life. More information can be found on their website:https://www.bayanihan.ca/vfca