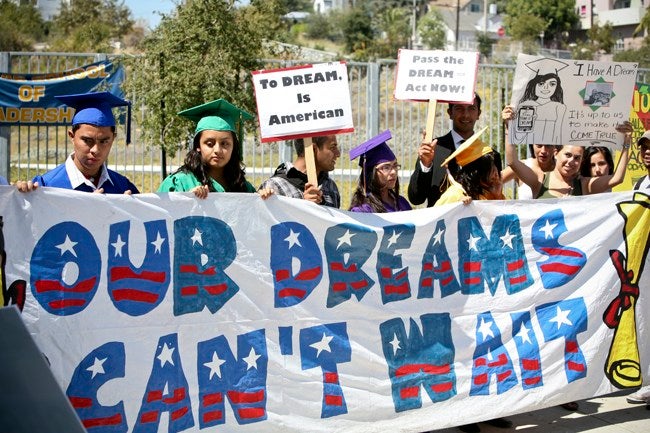 DACA recipients need not fear immediate deportation and still have an opportunity.to defeat President Trump’s attack on the program. NCLR

“If you currently have an approved case and work permit, that protection and permit are valid until they expire unless revoked and terminated immediately,” explained Allison Davenport, staff attorney of Immigrant Legal Resource Center (ILRC), during a press call last week.

What is true is that US immigration is no longer accepting applications for DACA as of (as of September 6). But for those who had applications on file by September 5, the day of President Donald Trump’s announcement, “their cases will be processed normally,” explained Davenport.

Current DACA recipients whose permits will expire in the next six months (between until March 5, 2018) will still be allowed to renew their DACA. They are the only ones who can renew their DACA status; their renewal, however, must be received by the deadline of October 5, so they must reapply early enough before October 5.

Any cases that expire as of March 6, 2018 or later, would no longer be eligible for renewal. Holders of an unexpired grant of DACA will continue to be protected and could still work legally with their work permits until expiration. They are protected from deportation too unless they lose DACA status for some valid reasons like criminal or any illegal activity that would warrant revocation.

Nevertheless, Davenport as well as advocates from the National Immigration Law Center (NILC) and Asian Americans Advancing Justice advised recipients to consult a qualified legal service provider to know if they may be qualified for other immigration benefits.

“Be aware though of fraudulent service provider at this time of so much confusion and fear in the community, let us not fall prey to fraudulent legal service provider. Go to www.immigrationadvocates.org.and under the nonprofit tab is a national legal directory for quality legal provider in your area,” reminded Davenport.

Meanwhile, legal challenges are already being deployed against Trump’s termination of the DACA program.

“We are arguing that the Trump decision to end DACA violates federal law for the following reasons. First, when the government reverses a long-established policy, it must show that it has good reasons for doing so as in DACA. This is true especially when there has been reliance on a longstanding and well-established policy such as DACA,” said Ignacia Rodriguez, immigration policy advocate of the National Immigration Law Center (NILC).

“The administration’s failure to show good reason for reversing DACA violated the administrative procedures act (APA), a federal statute that forbids arbitrary and capricious acts of the federal government and abrupt changes of direction without adequate justification,” Rodriguez maintained.

Rodriguez also argued that the decision to terminate DACA violates the equal protection clause of the Constitution, which prohibits discrimination on the basis of race, ethnicity or national origin.

Fifteen states as well as the District of Columbia are also arguing that Trump’s decision violated the due process right of the DACA recipient by failing to protect and safeguard crucial information that DACA recipients provided when they applied for the benefit.

“But we are not just fighting in the courtroom. We are mobilizing our communities and allies. We are asking our local leaders to support and commit to protecting immigrant youth and we are pushing Congress to act to pass the Dream Act 2017 that is bicameral, bipartisan and would provide a path to citizenship,” Rodriguez added.

Rodriguez also asked everyone to keep abreast of more actions in demanding protection for DACA recipients and for the passage of the DREAM Act through the website www.weareheretostay.org.