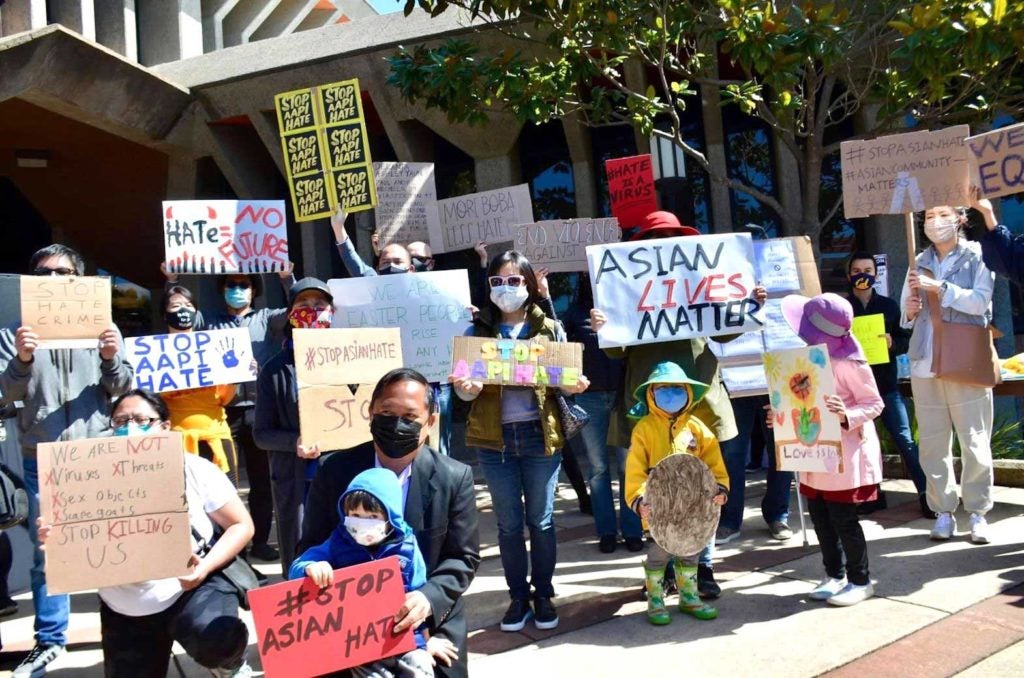 Multigenerational families attended to the rally to denounce the recent rise  of  hate crimes against Asians that escalated with the killing of  8 spa operators in Atlanta, Georgia. INQUIRER/CM Querol Moreno

DALY CITY, California – Filipino American cause-oriented organizations united against a common adversary — anti-Asian bigotry–that has been the focus of nationwide protest rallies this past weekend  in this country.

Four days earlier a lone gunman had barged into three spas operated by Asian women in greater Atlanta, Georgia  and shot dead 8 people including 6 women of Korean descent.  Despite the targeted attacks, Atlanta law enforcement officers were reluctant to say race motivated the violence because the suspect “did not say it was.”  Instead they echoed the suspect’s admission of frustration over sex addiction that he wanted to “eliminate” by killing the spa operators.

The rampage escalated recent unabated attacks on mostly older persons of Asian heritage, including two in California who have died from their injuries.  The spa killing also exposed  the “legacy of hyper-sexualization and fetishization of Asian and Pacific Islander women,” according to an open letter at press time was set for publication March 22 in the Los Angeles Times.

Leaders say the surge of anti-Asian violence is a consequence of the scapegoating  of the population by the previous president who still uses Chinese references to Covid19, insinuating an ethnic source of blame for the pandemic.  About 3,800 hate crimes against Asians have been recorded by Asian Americans Advancing Justice and similar advocacy groups from March 2020 to March 2021.

The Atlanta massacre heightened  public outcry when the  spokesperson for the Sheriff’s Office seemed to exhibit empathy for the shooter by describing the latter as “having a bad day…and so he did this” but expressed little  compassion for the fatalities and their families.

“The horrific violence and deaths that have occurred towards elders and women in our AAPI community should have never happened,” Manalo voiced the sentiment  behind the gathering in the city where about half of the 107,000 residents identify as of Asian descent.  “This rally and vigil is for the community to stand against hate and unite against racism in a space to be ‘in community’  to start to heal and unify.”‘

Multigenerational families attended the rally with eloquent signs.  Manalo wore her message in bold colors clamoring for “love not hate.”  Attendees came from all over the county and beyond.

ALLICE  2021 president Nan Santiago, former president Allen Capalla and member  Rev. Leonard Oakes read the abuse-prevention organization’s statement demanding elected officials and people in power to “stop the use of racist language in reference to the pandemic” and for  “authorities to be accountable by recognizing and prosecuting hate crimes to prevent recurrence.” 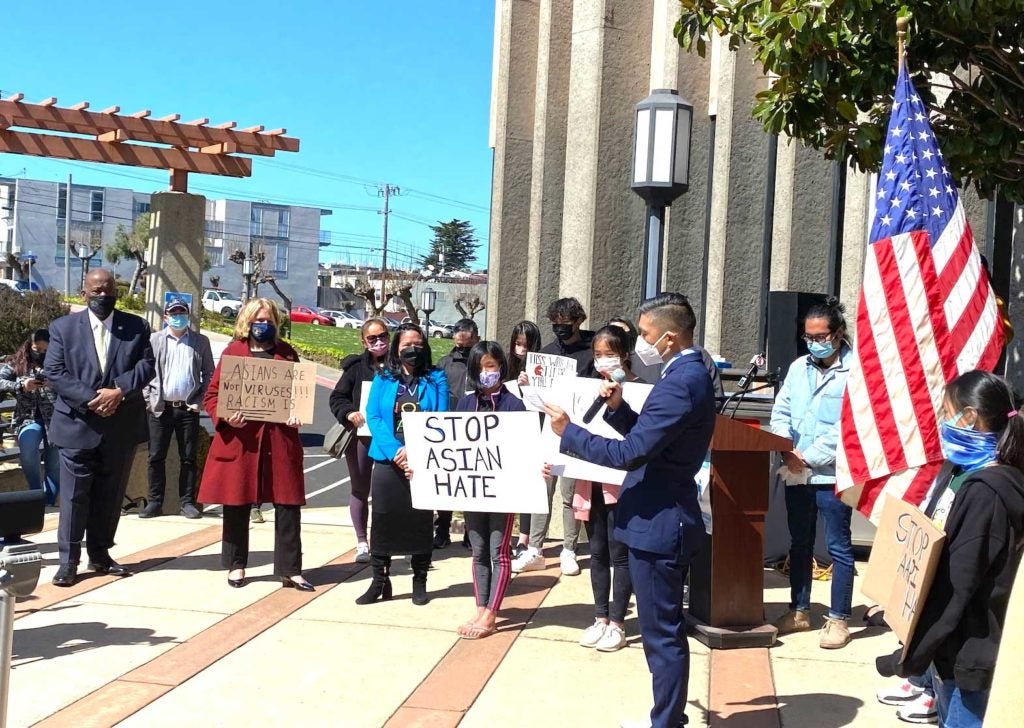 Filipino Mental Health Initiatives therapist provided on-site counseling for attendees who have experienced racist attacks or are feeling fear and anxiety because of recent events.

Canepa delivered the same message at a vigil later that afternoon in Brisbane, also in north San Mateo County.   Brisbane resident Kalvin Lee had reached out to the City Council and the City Manager, who expressed support and communication manager Caroline Cheung immediately began working with Lee  on planning the vigil.