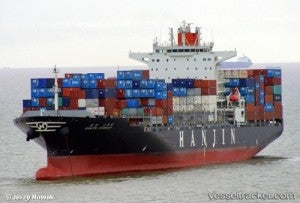 The Filipino and Korean crew of Hanjin Scarlet have been stranded off Saturna Island, BC since August due to the shipping company’s bankruptcy. VESSEL TRACKER

The assistance came in the form more than a ton of Christmas provisions for the 16-member crew of the 255-metre Hanjin Scarlet, anchored off Saturna Island, about 70 kilometers northeast of Victoria. It included a Christmas tree, a pig and barbecue coals.

The Hanjin Victoria is tied up in an international bankruptcy issue. Hanjin, the seventh largest shipping company in the world went bankrupt and several of its container ships have been stranded in waters around the world. Several ships were sized in California after unloading on behalf of creditors of the South Korean company.

“It’s lonely,” Romeo Cabacang, 40, who is married with two children in Manila, told CTVNews he’s been on board the ship for 10 months, including the months being stranded. “Nobody knows when we are going home,” he said. They are being paid, but say they can’t afford to leave the ship and their jobs.

Jason Woods, a member of Vancouver’s International Longshore and Warehouse Union, told CTVNews the donations are a message of hope to the stranded crew.