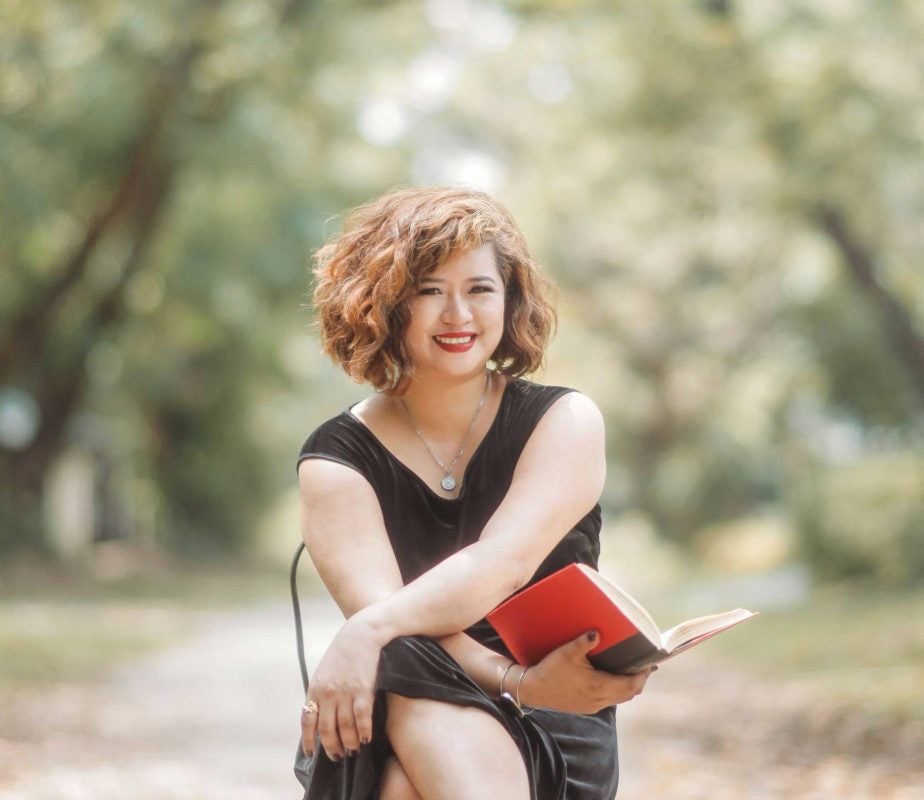 Angela Gabrielle Fabunan is the poetry editor of Inklette Magazine and the copy editor of Balangiga Press. CONTRIBUTED

Ashes to ashes, all fall down. That’s how Angela Gabrielle Fabunan, 32, a multi-awarded poet, explains why her family immigrated to America, in her poem Abó (Ash), from the poetry collection Homecoming of Age.

Angela is the poetry editor of Inklette Magazine and the copy editor of Balangiga Press.

“We need poetry because we suffer. The subjective experiences that have us brushing up against the wooden door of that pain, and the splinters we have from it, and then how we get the courage to open that door and what we find behind it,” Angela says. Hence, poetry becomes confessional and a part of social movements.

The Fabunans of Zambales did not need to emigrate. They had farmlands, mango orchards and businesses, until Mt. Pinatubo erupted in 1991.

To keep their American citizenship, they were required to be in the States at a certain age. The Fabunan siblings left the Philippines after getting their degrees in the Philippines, except Angela Gabrielle, whose adoption was legalized in 1997 and she became a naturalized citizen later.

‘However shaky to build a home upon’

Angela had divided her time between New York, Manila and Zambales, until the COVID-19 pandemic.

“Since my dad had passed on and my siblings were all in the states, the only one in the Philippines from my immediate family was my mom. She is my home,” Angela says.

Angela’s family built a new house on the same ground where the ancestral home was burned down in 2002 at the same time her father died in New York.

Angela does not see herself as nationalistic, since she says home is not static and can change over time.

Her poem Migration Story in the collection The Sea that Beckoned published by Platypus Press in 2019, Angela narrates their family’s life in New York; that is not all about “milk and honey.”

The family had its share of pressures, like taking odd jobs, racial discrimination in the workplace, and not speaking with the “correct” accent. Members were told to “Go back to where you came from!”

Part of the American Dream is to have a place to call home. In 1992, her parents finally bought a house in Flushing.

Like many parents, Angela’s father wanted her to become a lawyer. But she also wanted to become an actress and was able to secure an audition to the prestigious La Guardia School for the Arts in New York. But she was discouraged by her mother telling her about the lack of Asian American actresses on television.

At Bowdoin College in Maine, Angela enrolled in Political Science but shifted to BA in English and American Literature. Away from family, she experienced homesickness and also started questioning her identity. Later, these would become the theme of her poetry.

“I met half-white, half-Filipina girls who were ashamed of being Filipinos. That sense of alienation continued throughout college, for many other reasons than race. It’s as if I’ve lived with a sense of being an outcast all my life and have struggled with trying to belong to certain groups. I was not at all comfortable with who I was for most of my life, except now,” Angela says.

In 2012, during the last year in college, she went back to the Philippines and took non-credit courses at the University of Sto. Tomas.  She took poetry classes at Bowdoin and UST, but did not think of becoming a poet.

She eventually graduated from Bowdoin in 2014. It was during the Creative Writing Program at the University of the Philippines that she wanted to be a poet – a true one who creates art. She is currently doing her master’s thesis in Creative Writing at UP.

In the Philippines, Angela lived with her mother and her stepdad, Archie.

“Archie, still alive then, was an intellectual and encouraged me to (have my work published). So, I did and was published in Young Blood, and Asian Cha, my first poetry publication,” Angela says.

‘You float in ever-changing phases’

Angela remembers that when she was a child in Zambales, she had been reciting the poetry on her own—from Emily Dickinson’s poems in her third-grade class to the Owl and the Pussy Cat. She recalls the clouds of Zambales and its 14 towns, in the same melodramatic intonation of poems she had heard.

“I did not encounter Philippine literature in New York, when growing up, not for the lack of searching. I would search libraries for books and come up empty. My brother, Rossano, said that there’s a lively underground scene in New York.” Rossano is a spoken-word artist, writer and professor at St. John’s University in New York.

Angela performed at open mics and met poets in Maine and New York. The most popular ones in New York are the Bowery Poetry Club, Nuyorican Poetry Cafe, and the Cornelia Street Cafe. She also got in touch with playwrights, actors, poets, writers—friends from high school and college and became a part of the writers talking about their craft.

Yet, she thinks writing is a solitary art, and as much as the writer fulfills a role in society, they’re also loners.

In graduate school at UP Diliman, Angela started writing seriously. She became a member of the UP Writers Club, which was then a hub of intellectual curiosity that cultivated her interest in poetry.

In 2015, a year after entering UP, she was told by a friend that they were sending an entry to the Palanca Awards (a prestigious literary award in the Philippines). She eventually won third prize in the poetry category. It made her pursue poetry seriously. Later, she won Amelia Lapeña Bonifacio Literary Award (Poetry, 2018). She has been a recipient of the Rutan Grant as well as the Gibbons Fellowship.

“Winning contests and joining workshops is certainly not the only way to go about building a literary career—first of all, it’s not surefire, it’s certainly competitive, it’s emotionally taxing, and there are so many other avenues for publishing.  My literary journey starts with workshops and awards because, to be honest, I got lucky in the draws,” Angela says.

“As with every literary community, there are gatekeepers. Then there are the thinkers—who interrogate the way we judge poetry, poets, each other, and I’m lucky to have been exposed to them. Those who say you can’t do this because that, who lord over with their seniority, who trample on those who are just starting on the scene—those to me are foremost at the gates,” Angela explains.

Angela still thinks she is largely ignored, which allows her the independence to work on her poetry.

“We don’t go into poetry to make money. I think my primary motivation is still to play with words to make art. Art, to me, is not just about creating beautiful things but also creating social change but also noting how we communicate with one another. And also changing how we think about one another. I want to be a poet because it’s still poignant for me. It’s a painful process, sometimes, but it’s something my soul enjoys to the highest degree” Angela says.

To the aspiring poets, Angela has this advice:

“As much as commentary should and can help further your poetry, you shouldn’t let anyone else dictate your craft except you. I want to pass on what I’ve been wisely told: Let the critics be the critics, and the poets be the poets.”

Angela Gabrielle Fabunan’s second book of poetry from UP Press is called Young Enough To Play, a woman’s perspective on the Filipina and the Filipino American. It will be released in mid to late 2021.