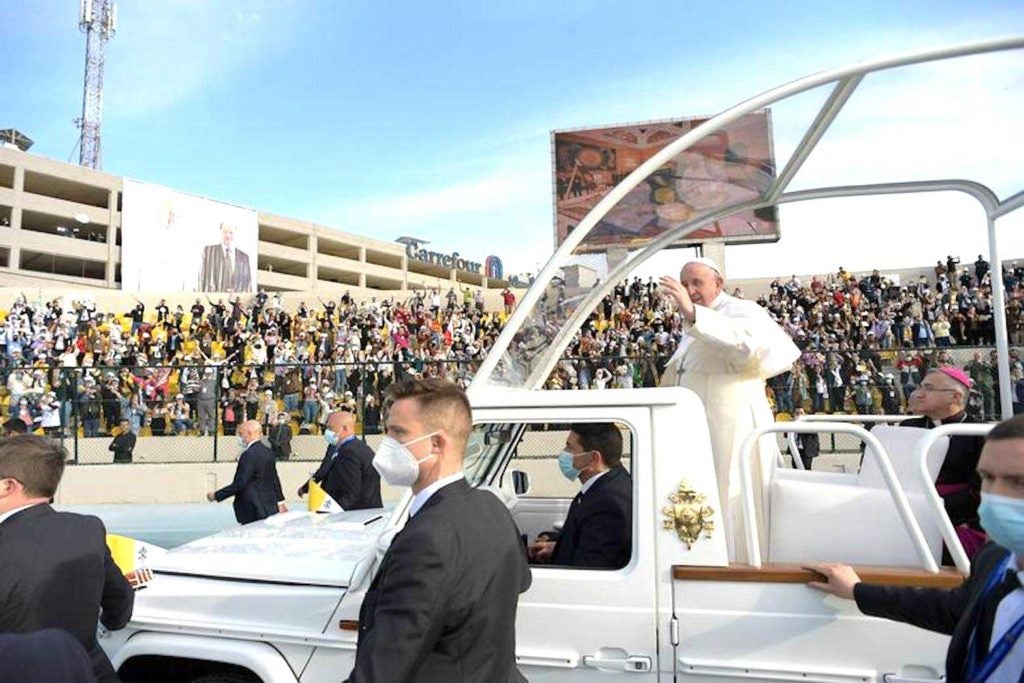 The Iraqi Christian communities and Islamic imams, most world leaders, the international diplomatic officials in particular, and even some of his critics celebrated a visit they never thought would happen.

Brave Francis has realized one of equally brave John Paul II’s dreams: To bring God’s good news to this suffering Islamic nation. Several months before the start of the Great Jubilee of the Year 2000, Pope St. John Paul II had expressed his desire to visit Iraq but he never made it.

It’s nothing short of a miracle. At 84, himself suffering from occasional bouts of sciatica, Francis decided with sheer power of the human will or, to use the less elegiac term, a stubborn determination to visit the so-called cradle of human civilization and the cradle of the three Abrahamic religions (Judaism, Christianity, and Islam). And he made it!

With Covid-19 and its variants plaguing the earth, less than a month when Iran-sponsored militias fired ten rockets and killed US troops at the Ayn Al Asad air base in the Kurdish north, and with many other potential security threats, the old Jesuit Catholic leader went to one of the most troubled parts of the Middle East at the Muslims’ invitation – and got back to Rome whole, safe, and sound. What is this? A miracle or, maybe, an unusual sign of Divine Providence!

Pope Francis has become the universal brother and the Vicar of Christ in Iraq was arguably the most emblematic of fratelli tutti of all time. I recall that, in his 2020 encyclical Fratelli Tutti, Pope Francis articulated his vision of human fraternity and social friendship, which he believes is an utmost desire flowing from the inner recesses of one’s soul to give warm embrace to all without exception. We are all brothers and sisters!

During this journey, the universal brother broke down all walls and began to build an open bridge when he met with Grand Ayatollah Ali al-Sistani, the highest-ranking Shiite leader of Iraq. That meeting was the second solid bridge towards interreligious dialogue and genuine fraternity; the first one, of course, was built after Pope Francis celebrated the first-ever International Day of Human Fraternity by signing a joint declaration with Grand Imam Ahmed el-Tayeb of Al-Azhar during an interreligious meeting in Abu Dhabi, UAE, in 2019.

Today, universal brotherhood is not just beautiful pastoral words sent to a nation experiencing pain and agony, but a brave mission personally accomplished in order to show the Face of Jesus to the world. That’s precisely what Fratelli tutti means when married with missio ad gentes, a call that dates back to the time when Jesus instructed his apostles 2,000 years ago to go to the ends of the earth, not to proselytize but to tell God’s good news to all God’s children.

Part of that beautiful story is the fact that the Nineveh Plains of Northern Iraq, traditionally the heart of Christianity in ancient Mesapotamia, was devastated by an ISIS occupation from 2014 to 2017. There, scores of Christians were killed, tens of thousands driven into exile, a dozen churches burned, and entire Christian villages destroyed. On his visit to Mosul, although “shocked” by the destruction he witnessed there, Pope Francis presided over a memorial for victims of war, terrorism, and violence, specifically calling attention to the agony that thousands of women and girls experienced when they were owned, used, and sold as a material property by ISIS militants.

Call it a miracle or Divine Providence, but, on the exact day of the Holy Father’s departure on March 8 (also International Women’s Day), Iraqi President Barham Salih,  after many years of delay, ratified a law benefitting Yazidi survivors of the 2014-2017 ISIS genocide. The first-ever papal visit to Iraq indeed gave hope to its people as it provided an immeasurable impact at the highest levels. As a gesture of good will, in December 2020, the Iraqi Parliament declared Christmas an official national holiday, making the annual event a joyful opportunity for every citizen of this Muslim-majority nation to celebrate the Birth of Jesus, the most visible sign of elusive hope.

It may not be a miracle after all, but Pope Francis makes every pastoral visit a most blessed meeting experience between the Creator and the creature He made in His own image and likeness.