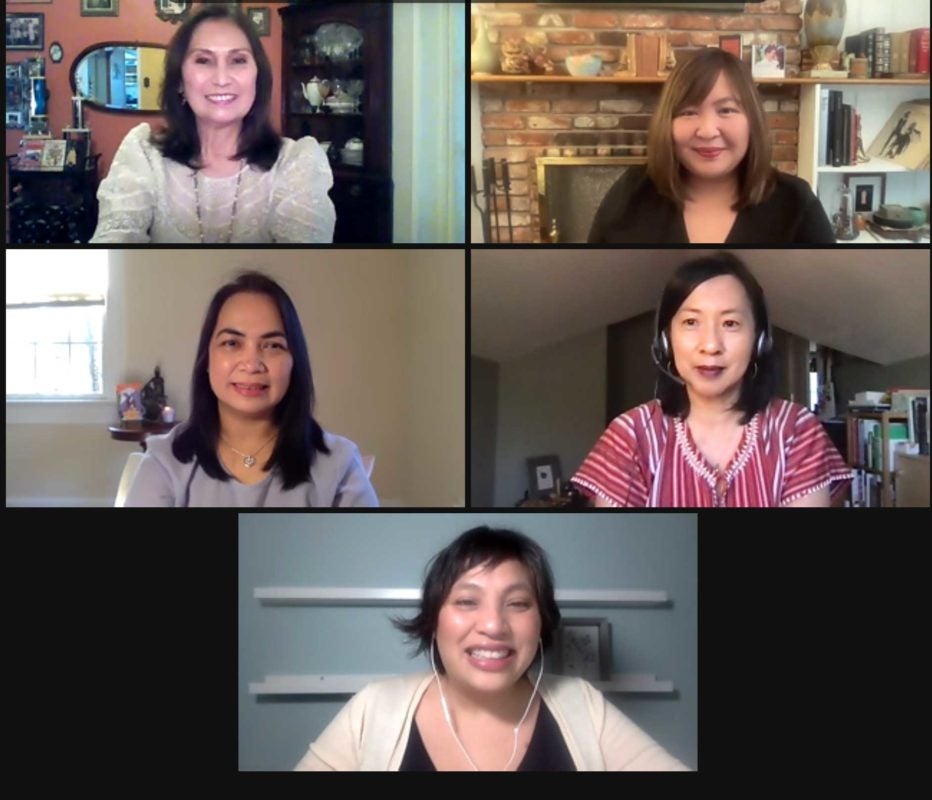 “Fortunately, we have been seeing an increasing number of Filipinos making a name for themselves in the global publishing scene and making their mark on the printed page around the world,” said the Embassy’s Deputy Chief of Mission Renato Pedro O. Villa in his opening remarks.

The speakers read excerpts from their published works and shared their respective journeys as Filipino migrant women, including their influences, sources of inspiration, and challenges.

They spoke about how being Filipino or Filipino American played a role in their writing and how they navigated various social issues that the Filipino diaspora has faced over the years.

Cecilia Manguerra Brainard is a fiction writer whose three novels — When the Rainbow Goddess Wept, Magdalena, and The Newspaper Widow, are set in Ubec, which is based on Cebu, her hometown in the Philippines.

Brainard also highlighted her focus on character development, saying that “What carries the weight of the story would be the characters and what happens to them.”

Migs Bravo Dutt, author of the contemporary novel, The Rosales House, has likewise contributed poetry to various anthologies and journals in Asia, Croatia, and the United States. She described her writing process as an exercise in consistency.

“I try to be consistent in my writing. So I think one of the things I tried to establish is to write daily. But whenever I know that I’m going to write for a couple of hours, I prepare a playlist and so on the day that I write longer, I play that on and on repeatedly. I also get inspired by nature so whenever I go out for a walk, I try to be present. I try to observe what is happening around me, tiny things, tiny flowers, what’s the color of the bird, what kind of trees, just basically I try to be present and observe those details,” Dutt shared.

Luisa A. Igloria was appointed as the Poet Laureate of the Commonwealth of Virginia (2020-2022) in July and is one of two co-winners of the 2019 Crab Orchard Poetry Prize for Maps for Migrants and Ghosts (Southern Illinois University Press, Fall 2020).

“I don’t think it’s possible to separate life from art, and vice versa. So the idea of equilibrium or balance and the idea of successful blending is beguiling, very attractive but this also seems to be premised on the thought that there’s something inherently wrong and may be disturbing about things that don’t show symmetry,” said Igloria when asked about achieving equilibrium in writing by blending distinct experiences.

“I think there’s more value in embracing and celebrating difference, or unblendability. We’re able to create more powerful connections when we tell our very specific stories and histories which are of course complex and messy, as well as profound and also ordinary,” Igloria said further.

Gayle Romasanta, a writer and artist whose work focuses on social issues, underscored the still relatively small number of authors of color being published in the United States. However, she remains hopeful with what the community is creating, especially through the advancements in technology. Romansanta co-authored the first book about Filipino labor leader Larry Itliong entitled, Journey for Justice: The Life of Larry Itliong, with the late and great historian Dr. Dawn Mabalon.

“He [Larry Itliong] said that the downfall of the Filipino is the tribalism. The only way that we can actually unify in the United States is to come together, to fight together,” Romasanta said, as she shared her personal journey of letting go of the classism typically embraced by previous generations of Filipino Americans and advocating for racial equity and justice.

You may connect with the speakers and moderator by visiting their websites and social media pages below:

“A Panel Discussion with Filipino and Fil-Am Women Writers” may be viewed on the Embassy’s Facebook page.