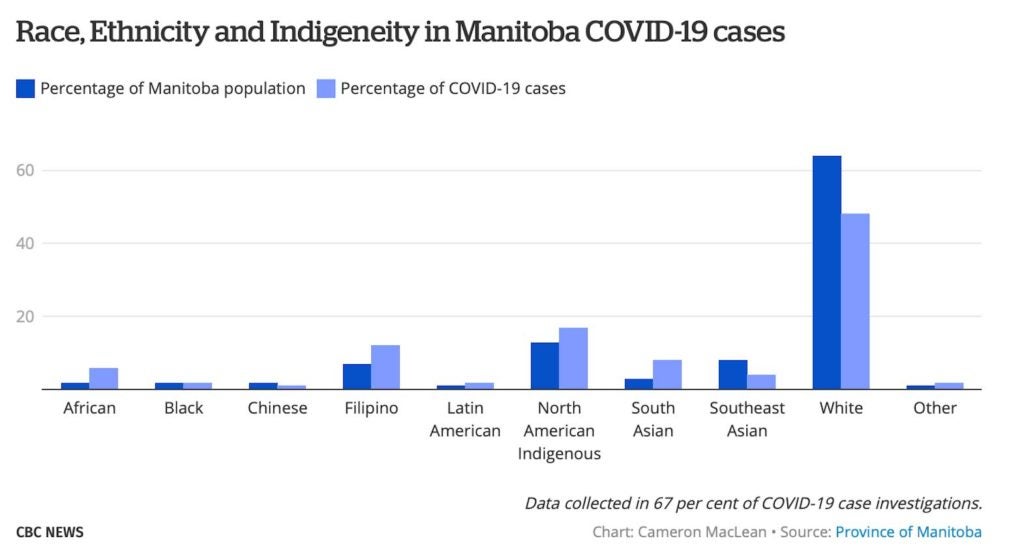 WINNIPEG, Manitoba — Provincial authorities are reporting that Covid-19 has disproportionately affected Indigenous, Filipino, Black and other people of color in the province.

“This is systemic and it is seen in every jurisdiction,” Dr. Brent Roussin, chief provincial public health officer, said Monday, according to a CTVNews report.

Roussin said the province’s race and ethnicity data reflect a nationwide pattern in Canada and around the world.

Fifty-one per cent of people who tested positive for Covid-19 self-identified as Black, Indigenous or of color, which comprise 35 percent of Manitoba residents.

Filipinos also had significant infection rates — 12 percent of cases, while representing seven percent of the population.

South Asian people, three percent of the population, made up eight percent of positive cases.

The report noted that white people experienced less Covid-19 than would be expected based on population size.

It’s not that people in these communities are to blame, Roussin clarified. Covid-19 infections are largely linked to pre-existing inequities, including in housing and employment.

“We know people in (Black, Indigenous and people of color) communities are more likely to live in lower income neighborhoods, live in overcrowded and multi-generational households,” Roussin said. “They are also more likely to have low-wage occupations” which cannot be done remotely.

The report compiled Manitoba infections data from May 1 to Dec. 31, 2020. The report can be read here.