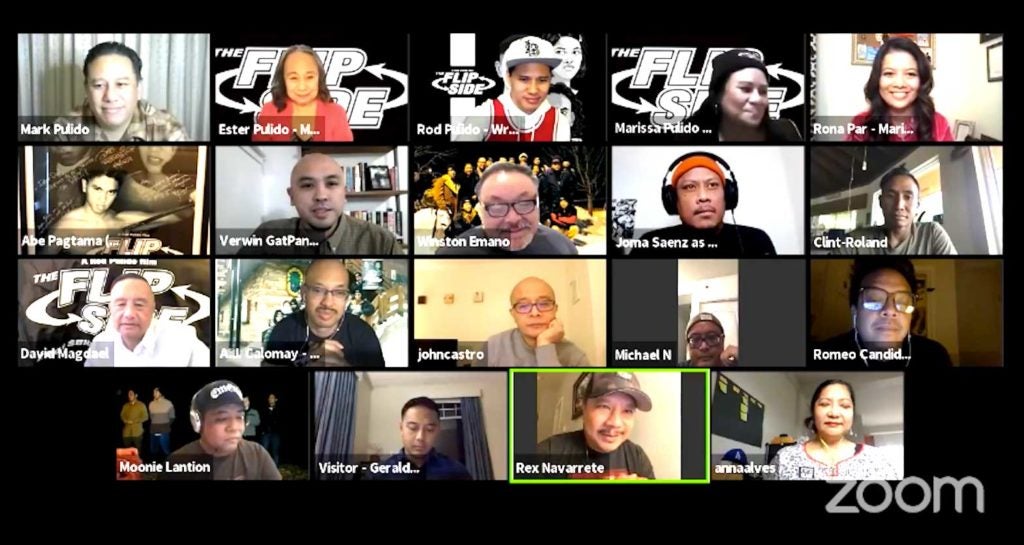 Fans and filmmakers celebrate “The Flip Side” online. INQUIRER/Agnes Constante

From saving his money to finance the film to dedicating much of his time to the project, he called it a grueling exercise that not many people are willing to embark on.

“Even to this day I know how lucky I am because so many independent filmmakers do what I did — make a good movie, save all their money, put it into it. And they see little return at the end,” Pulido said on Jan. 23 during a virtual celebration of the film’s 20th anniversary.

“The Flip Side,” a comedy that tells the story of a Filipino American family, explores themes of identity and assimilating in America. Among cast included Pulido’s family members, and filming locations included the house he grew up in.

Getting his film into Sundance is something Pulido continues to feel was a blessing, he said.

He remembered connecting with a programmer from the film festival who sought Asian American and Pacific Islander filmmakers during a forum. He said he was one of three in the crowd who identified as AAPI. The programmer fought to include Pulido’s film in the festival, which he credits as the reason “The Flip Side” made it into Sundance.

“It’s really who you know,” Pulido said. “You can’t just drop your film in the mail and expect to get in based on merit.”

Pulido’s brother, Mark Pulido, former mayor of the City of Cerritos, said during the virtual celebration that he remembered knowing how significant and unbelievable the film’s acceptance into Sundance was.

“I had always just watched him with amazement how he could dream so big and pursuing a path that really seemed a high mountain to climb. So when he gave the family the news it was absolutely mind-blowing,” Mark Pulido said.

He and his sister Marissa Pulido Rebaya, recounted mobilizing the Filipino American community in Salt Lake City, where Sundance is held, to sell out every single screening to create buzz around “The Flip Side.” Mark Pulido said they succeeded in doing so.

The film received praise at Sundance, but did not secure a distribution deal. Rod Pulido wrote a follow up script, but nobody wanted to make it. He said producers wanted him to make his characters white.

Pulido said he burned out after making the film and ultimately decided to leave Hollywood. He said he knew there was no way he could create another film the way he made “The Flip Side.” After that project, life took over. He had gotten married and had to get a full-time job.

Although he left filmmaking, Pulido never gave up on wanting to tell Filipino stories, he said. He shifted course and learned to write prose over the last few years, got a literary agent, and now has several manuscripts in submission.

“I’ll never give up on my dream of telling Filipino stories,” he said.

During the online celebration, participants also discussed what needs to happen for more Filipino Americans to make it to Sundance and Hollywood. Several agreed that talent exists in the community, but funding projects remains a significant hurdle.

“I’d love to see all the rich Pinoys out there who’ve made it, all these people who are in a position to make things happen and have the funding, support our own,” Pulido said.

He added that he hopes the story of how “The Flip Side” came to be and its journey to Sundance inspires other filmmakers to persevere despite how difficult it can be to succeed in the industry.

“The Flip Side” is available for free on YouTube.