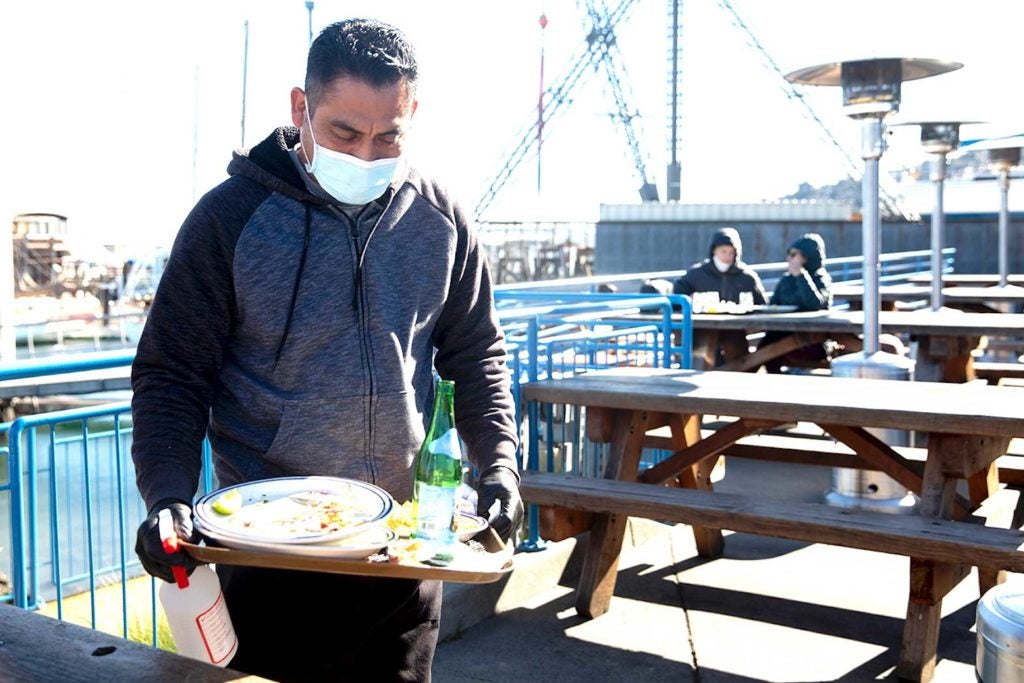 Victor Garcia works to disinfect tables and clear finished plates at Fish restaurant in Sausalito, California, on Jan. 25. Fish was one of the first restaurants to re-open for outdoor dining after Governor Gavin Newsom lifted shelter-in-place orders. KHN

A dozen states are reporting drops of 25% or more in new covid-19 cases and more than 1,200 counties have seen the same, federal data released Wednesday shows. Experts say the plunge may relate to growing fear of the virus after it reached record-high levels, as well as soaring hopes of getting vaccinated soon.

Nationally, new cases have dropped 21% from the prior week, according to Department of Health and Human Services data, reflecting slightly more than 3,000 counties. Corresponding declines in hospitalization and death may take days or weeks to arrive, and the battle against the deadly virus rages on at record levels in many places.

Health officials, data modeling experts and epidemiologists agreed it’s too early to see a bump from the vaccine rollout that started with health care workers in late December and has, in many states, moved on to include older Americans.

Instead, they said, the factors involved are more likely behavior-driven, with people settling back home after the holidays, or reacting to news of hospital beds running out in places like Los Angeles. Others are finding the resolve to wear masks and physically distance with the prospect of a vaccine becoming more immediate.

A single reason is hard to pinpoint, said Adriane Casalotti, chief of government and public affairs for the National Association of County and City Health Officials. She said it may be due in part to people hoping to avoid the new, more contagious variants of the virus, which some experts say appear to be deadlier as well.

She also said so many people got sick in the last surge that more people may be taking precautions: “There’s a better chance you know someone who had it,” Casalotti said.

Eva Lee, a mathematician and engineering professor at the Georgia Institute of Technology, works on models predicting covid patterns. She said in an email that the decline reflects the natural course of the virus as it infects a social web of people, exhausts that cluster, dies down and then emerges in new groups.

She also said the national trend, with even steeper drops in California, also reflects restrictions in that state, which included closing indoor dining and a 10 p.m. curfew in hard-hit regions. She said those measures take a few weeks to show up in new-case data.

“It is a very unstable equilibrium at the moment,” Lee wrote in the email. “So any premature celebration would lead to another spike, as we have seen it time and again in the US.”

Four California counties were among the five large U.S. counties seeing the steepest case drops, including Los Angeles County, where new cases declined nearly 40% in the week ending Jan. 25, compared with the week before.

Dr. Karin Michels, chair of epidemiology at the UCLA Fielding School of Public Health, said the lower numbers in L.A. after the virus infected 1 in 8 county residents likely mirror what happened after New York City’s surge: People got very scared and changed their behavior.

“People are beginning to understand we really need to get our act together in L.A., so that helps,” she said. “The big fear [now] is ‘Is it really going in this direction, is it plateauing, or where is it going to go?’ We need to go further down, because it is really high.”

Michels said herd immunity would not explain the declines, since we’re nowhere near the level of 70% of the population having had the disease or been vaccinated. She said the declines may also reflect a drop in testing, as Dodger Stadium has been converted from a mass testing site to a mass vaccination center.

Officials with the California Department of Public Health acknowledged that testing has fallen off, but overall rates of positive covid tests are falling, suggesting the change is real.

New cases also fell significantly in Wyoming, Oregon, South Dakota and Utah, with each state recording at least 30% fewer new cases. Each of those states reported having vaccinated 8% or more of their adult population by Tuesday, putting them among the top 20 states in terms of vaccination rate.

Alaska leads the states currently, at nearly 15%, according to HHS. It’s also logged a new-case drop of 24% in recent days.

Yet experts aren’t willing to say yet that the vaccines are driving cases down.

“Most people in public health don’t think we’ll see the benefit of the vaccine until a few months from now,” said Dr. Marcus Plescia, chief medical officer of the Association of State and Territorial Health Officials.

The number of deaths continues to remain high weeks after high case rates as the virus variably attacks the heart, kidneys, lungs and nervous system. Many patients remain unconscious and on a ventilator for weeks as doctors search for signs of improvement.

Anxiety about new strains of the virus from the U.K., Brazil and South Africa remains high in Portland’s Multnomah County, Oregon, which saw a drastic 43% new-case decline in recent days.

“The concern is that everything could change,” said Kate Yeiser, spokesperson for the Multnomah County Health Department.

Shoshana Dubnow contributed to this story.