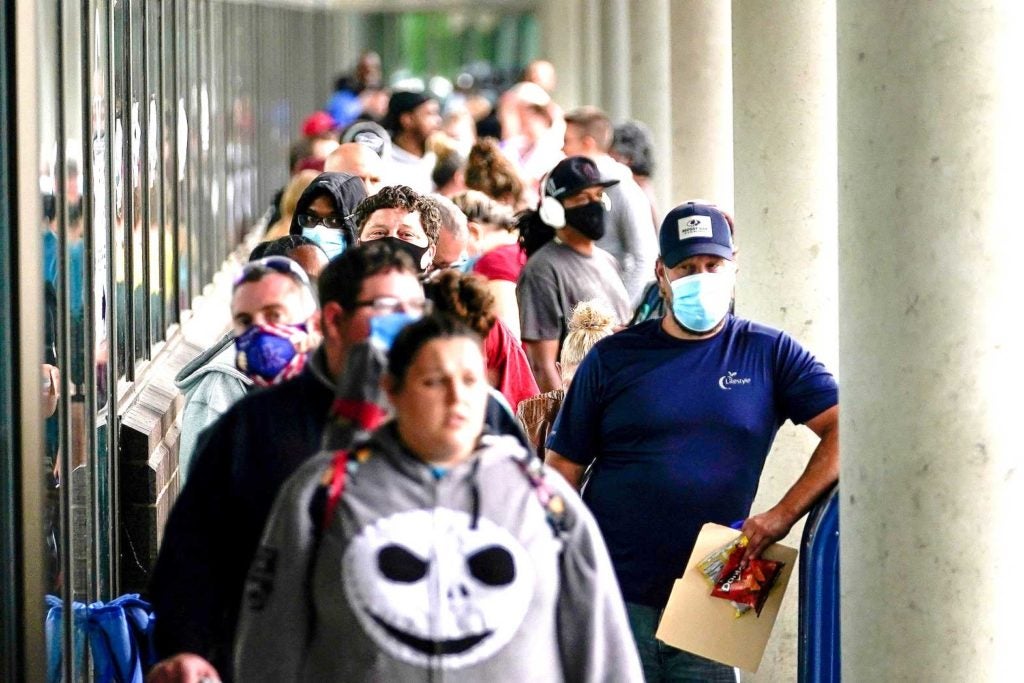 Hundreds of people line up outside a Kentucky Career Center hoping to find assistance with their unemployment claim in Frankfort, Kentucky, U.S. June 18, 2020. REUTERS/Bryan Woolston/File Photo

WASHINGTON – The number of Americans filing new applications for unemployment benefits decreased modestly last week as the COVID-19 pandemic tears through the nation, raising the risk that the economy shed jobs for a second straight month in January.

Despite the labor market woes, the economy remains anchored by strong manufacturing and housing sectors. Other data on Thursday showed homebuilding and permits for future residential construction surged in December to levels last seen in 2006. Factory activity in the mid-Atlantic region accelerated this month, with manufacturers reporting a boom in new orders.

The services sector has borne the brunt of the coronavirus crisis, disproportionately impacting lower-wage earners, who tend to be women and minorities. Addressing the so-called K-shaped recovery, where better-paid workers are doing well while lower-paid workers are losing out, is one of the major challenges confronting President Joe Biden and his new administration.

Initial claims for state unemployment fell 26,000 to a seasonally adjusted 900,000 for the week ended Jan. 16, the Labor Department said. Economists polled by Reuters had forecast 910,000 applications in the latest week.

Unadjusted claims dropped 151,303 to 960,668 last week. Economists prefer the unadjusted number because of earlier difficulties adjusting the claims data for seasonal fluctuations due to the economic shock caused by the pandemic. Including a government-funded program for the self-employed, gig workers and others who do not qualify for the regular state unemployment programs 1.4 million people filed claims last week.

Out-of-control coronavirus infections are disrupting operations at businesses like restaurants, gyms and other establishments where crowds tend to gather, reducing hours for many workers and pushing others out of employment.

Consumers are also hunkering down at home, leading to a weakening in demand. COVID-19 has infected more than 24 million people, with the death toll exceeding 400,000 since the pandemic started in the United States.

U.S. stocks opened higher as investors bet on more pandemic relief and speedy vaccine rollouts under the Biden administration. The dollar fell against a basket of currencies. U.S. Treasury prices were lower.

Some of the elevation in claims reflects people re-applying for benefits following the government’s recent renewal of a $300 unemployment supplement until March 14 as part of the nearly $900 billion in additional fiscal stimulus. Programs for the self-employed, gig workers as well as those who have exhausted their benefits were also extended.

Claims data is also difficult to adjust for seasonal fluctuations at the start of the year, a task that has been made even harder given the shock caused by the coronavirus.

Nevertheless, recent data have shown the labor market recovery has stalled. The claims data covered the week during which the government surveyed establishments for the nonfarm payrolls component of January’s employment report. Claims were little changed between the December and January survey period.

The economy shed 140,000 jobs in December, the first job losses since April when authorities throughout the country enforced stay-at-home measures to slow the spread of the virus. Retail sales fell for a third straight month in December.

Though jobless claims have dropped from a record 6.867 million in March, they remain above their 665,000 peak during the 2007-09 Great Recession.

The claims report showed the number of people receiving benefits after an initial week of aid decreased 127,000 to 5.054 million during the week ending Jan. 9.

About 16 million people were on unemployment benefits under all programs at the start of the year. The economy has recovered 12.4 million of the 22.2 million jobs lost in March and April. Economists say it could take several years for the labor market to recover from the pandemic.

In a separate report on Thursday, the Commerce Department said housing starts jumped 5.8% to a seasonally adjusted annual rate of 1.669 million units last month, the highest level since September 2006. Economists had forecast starts would rise to a rate of 1.560 million units in December. Starts totaled 1.380 million in 2020, up 7.0% from 2019.

Permits for future homebuilding accelerated 4.5% to a rate of 1.709 million units in December, the highest since August 2006. Permits, which typically lead starts by one to two months, totaled 1.452 million last year, a 4.8% increase from 2019.

The housing market is being underpinned by cheaper mortgages and an exodus from city centers to suburbs and other low-density areas as companies allow employees to work from home and schools shift to online classes because of the pandemic. About 23.7% of the labor force is working from home.

A third report from the Philadelphia Federal Reserve showed its business conditions index soared to a reading of 26.5 this month from 9.1 in December. A measure of new orders at factories in the region that covers eastern Pennsylvania, southern New Jersey and Delaware, vaulted to a reading of 30.0 from 1.9 in December.

Factory employment measures also improved. While manufacturers reported paying more for raw materials, they were also able to increase prices for their goods. Manufacturers were upbeat about capital investment plans in the six months ahea

View comments
TAGS: US economic trends, US Housing, US labor market, US manufacturing