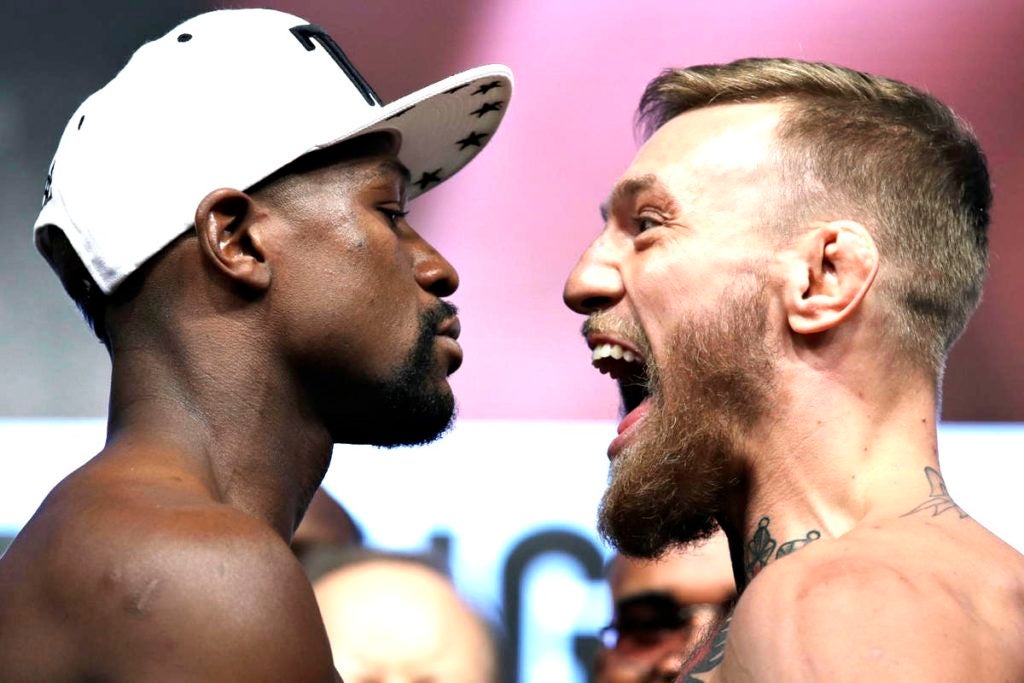 Floyd Mayweather Jr., left, and Conor McGregor face off during a weigh-in Friday, Aug. 25, 2017, in Las Vegas. The two are scheduled to fight in a boxing match Saturday in Las Vegas. AP PHOTO

Is there any doubt that Donald Trump is to politics what MMA fighter Conor McGregor is to boxing?

Neither belongs in the arena from which they draw attention. Good of the people? Of sports? It’s all in self-service.

But first, we must talk how Trump keeps picking a fight with everyone in his way and how it’s dominating the political news, and dividing the U.S., not to mention Filipino Americans.

Since my last column, the leader of the free world, which still includes the Philippines when I last checked, hardly resembles a leader, but a mad jeepney driver charting his own course in traffic.

As I write, the fourth largest city, Houston, Texas is suffering from some of the worst flooding in its history.

I lived in Houston for a time, I know what the flooding can be like in normal downpours. My heart goes out to my friends dealing with Tropical Storm Harvey.

It’s a real catastrophe. Not some inconsequential first-world problem.

And how does Trump deal with it? With the warmth and concern we expect from a president?

No, he tweets about non-related stuff (even plugging a friend’s book on Twitter) before expressing an ounce of empathy for the storm victims in Texas.

But then, it’s clear Trump doesn’t care so much.

On Friday, as Harvey made its way to Texas, Trump used the occasion to announce his pardoning of Arizona’s Sheriff Joe Arpaio, who had been convicted of violating the civil rights of Latinos.

It’s Trump’s surly signal to all who trade in institutional racism that he has your back, and full support.

Arpaio must be one of those “many fine people” Trump referred to in Charlottesville.

So let’s see in just one week, Trump has divided Latinos, blacks, and Jews. On Friday, he also formalized his transgender ban in the military. LGBTQ voters? Trump doesn’t care.

And that’s all following Trump’s vague Afghanistan speech of last week, coinciding with the U.S. Navy’s 4th mishap in six months, when commentators wondered aloud if the U.S. was losing relevance in Asia.

Considering Trump could be deploying up to 4,000 more troops to the longest war in U.S. history, that would be enough to chew on for a while.

But Trump has learned to keep churning out controversy.

On Tuesday, Trump held a campaign rally in Phoenix, where he played to a loving nativist crowd that cheered him on, even when he unashamedly lied about what he said after a Charlottesville white supremacist rally left one dead and 19 injured.

Then Wednesday, he spoke before the veterans group, the American Legion in Reno, the San Francisco of Nevada, and he was back to spouting phrases of unity through love of country.

It’s clear he’s using patriotism to find what common ground exists among Americans. But he’s dangerously fanning nativism, which has led to racist policies like the internment of Japanese Americans during World War II.

World leaders too must be having a hard time assessing the stability of the American president given his zig-zagging rhetorical message (not to mention his presidential tweets).

What do Filipino Americans think?

Trumpy Filipino and the Filipino divide

I’ve been calling on Dr. Roy Flores of the Cleveland Clinic for the last year to be my Filipino Trump interpreter. Flores, a member of that highly respected Santo Tomas medical mafia, has been a Trumpian since last summer.

I asked him if after Charlottesville and all the recent Trumpian outbursts if the president had gone too far.

“Trump still has my full support,” Flores texted me. “Media is so hypocritical. They are covering (Charlottesville) like Trump was the one who run (sic) over that poor lady. Media did not like his initial response and when he clarified it. (Later) on Monday still not good; media never critical with what the Left does like in Berkeley, where it is OK to suppress the other side’s views. Time to get over the fact that Trump beat Hillary; let’s get over it and move on to tax reform; immigration reform; fix Obama care; protect the nation etc; let us not fixated now on statues.”

I told him people have accepted Trump as president. They just don’t like what he’s doing. He’s also the cause of his political problems by his own actions, tweets and moral failings. Even many Republicans have begun to speak out against Trump, including majority leader Sen. Mitch McConnell (R-Kentucky).

I asked Flores why he was so loyal to Trump who has revealed his racism now, as he did in the past, hounding Obama to produce a birth certificate to prove he wasn’t African but American.

“Trump has disavowed KKK etc several times even before he became president; don’t know what actions he has done to make people conclude that he backs white supremacists,” Flores responded. “Obama to me was more of a racist or clearly played the ‘race card’ with his backers so often.”

But I pointed out Trump said that both sides were to blame in Charlottesville and said maybe fine people were among the neo-Nazis rallying. That’s not a clear denunciation of bigotry. Shouldn’t the president make that clear?

Flores texted me that an Indian doctor asked him, “You are ethnic, I am ethnic, how can you be Republican and vote for Trump?”

What did he say back to the Indian doctor? Flores didn’t answer directly.

“While waiting in between cases or while having lunch, doctors of different ethnic backgrounds frequently have friendly or sometimes heated political discussions,” Flores responded. “I would estimate that around 75 % of Indians are Democrats and their prevailing feeling is that being non-whites, they frequently are discriminated upon. Most of them have difficulty understanding why a non-white like me, votes Republican because GOP’s are racists.(My non-scientific opinions is that Asian doc’s by ethnicity that are predominately Democrats are: Pakistani, Chinese and Indian. While Koreans Vietnamese and Filipinos lean Republican). Clearly, the more successful financially and the ones who did rise into higher positions in the medical staff are conservative (no need to make excuses for lack of success). Of course Arab docs hate Trump. In my 40 years in America, I talk with more and more Jewish docs who are shifting away from the Democratic Party. Nearly all “observant “/ religious Jews are now Republicans.”

He didn’t say whether the Jews were offended by the anti-Semitic groups and neo-Nazis, whom Trump did not condemn.

But his answer ultimately gets to the heart of it all.

“Being conservative goes with hating PC/ political correctness. They would not over analyze such statements concluding that Trump is anti-Semitic and be offended,” Flores said.

Fighting political correctness–that’s what this is all about? And what of moral correctness? Simply ignored by Trump and the Republicans.

That’s where we are in America. And Filipinos, the leading Asian American group among Republicans in America, seem just fine with the way things are with Trump.

A divided America? Even among Filipinos. Maybe even more than Ferdinand Marcos in his heyday.

After the Pacquiao Debacle, I actually have come to appreciate Mayweather. You’re not still holding out for a Manny comeback are you?

Not me. But I thank Donald Trump for raising my interest in Saturday’s fight.

If it hasn’t dawned on you, Donald Trump is so much like the loudmouth Conor McGregor; it just isn’t funny.

It’s the only way to understand Trump’s every move. These days he’s picking a fight not just with Democrats, but also with Republicans. He’s going after Senate Majority leader Mitch McConnell. He’s calling out Sen. John McCain by name; tweeting; speaking off the cuff; not being politically correct.

And then suddenly, he switches back to tradition and reads off the prompter.

MMA? Trump is a mixed political artist with a mouth for self-promotion and penchant for self-aggrandizement. And he has no business in politics. And yet there he is.

Like Trump, McGregor has no business in the circumstances he finds himself.

He’s an octagon/UFC guy. And yet he will make millions after this weekend against the establishment fave, Floyd Mayweather.

Still, many people were actually being fooled into liking McGregor.

The betting was so heavy on McGregor leading up to the fight, that Las Vegas bookies were wondering how to cover in the event of a Trumpian upset.

Imagining Trump as McGregor is the only way I could watch the fight. Humor?

Think Trump in MMA garb with full body tats going for a takedown. (Or maybe a Trumpian “pussygrab.”)

But Saturday’s fight was all just boxing. Pass the smelling salts of reality.

McGregor is no boxer, and it showed in the 7th round, when there was nothing left in his punches and Mayweather just toyed with him. McGregor came out strong early, but Mayweather’s style was different this match. He was a stalker, who let McGregor punch himself out until he ran out of gas. Without the ability to deploy a leg, foot or knee, McGregor looked like a five tool guy with just a screwdriver.

The fight was stopped by TKO in the 10th . If you really think McGregor had a chance and actually won more than 1 or 2 rounds, then you are like Trump supporters, and only a knockout will convince you of his inadequacy.

But Saturday’s narrative rings true for Trump the non-politician. Trump should get wobbly and defenseless near the end of his first and only term. I don’t expect him to last.

Of course, no one thought Trump could win last November, and yet here we are.

Saturday’s fight was predictive and a positive distraction from the Trump follies. It’s a reassurance that all bombastic, money-making sideshows do ultimately come to an end, perhaps sooner than later.

I’m even happy to see Mayweather retire as pound-for-pound king—and stay that way. At age 40, no fights in two years, Mayweather’s current status allowed McGregor to make it look closer than it was.

Trump can fool himself into thinking he’s strong among his die-hard base supporters. But with his overall support in the 30 percent range, and divisive bombasts every week, it’s easy to imagine the neophyte politician Trump losing control of a Republican Congress, and not surviving a whole term.

And what about Manny? What about him? He’s just a footnote in any arena now.

Maybe he and Mayweather should start a senior boxing tour, sponsored by Alzheimer’s drug manufacturers. They can be paid in medical care.

But this MMA vs. boxing thing? This Trumpian/P.T. Barnum fantasy of mixing up sports in the ring should not be repeated—for the good of the world.

Unless you want to see a baseball player fight a football player in a boxing match? (Detroit’s Miguel Cabrera vs. the Yankees, one at a time?)

But maybe like everything else we are divided on that.

Emil Guillermo is an award-winning journalist and commentator for the Inquirer’s U.S. Bureau.