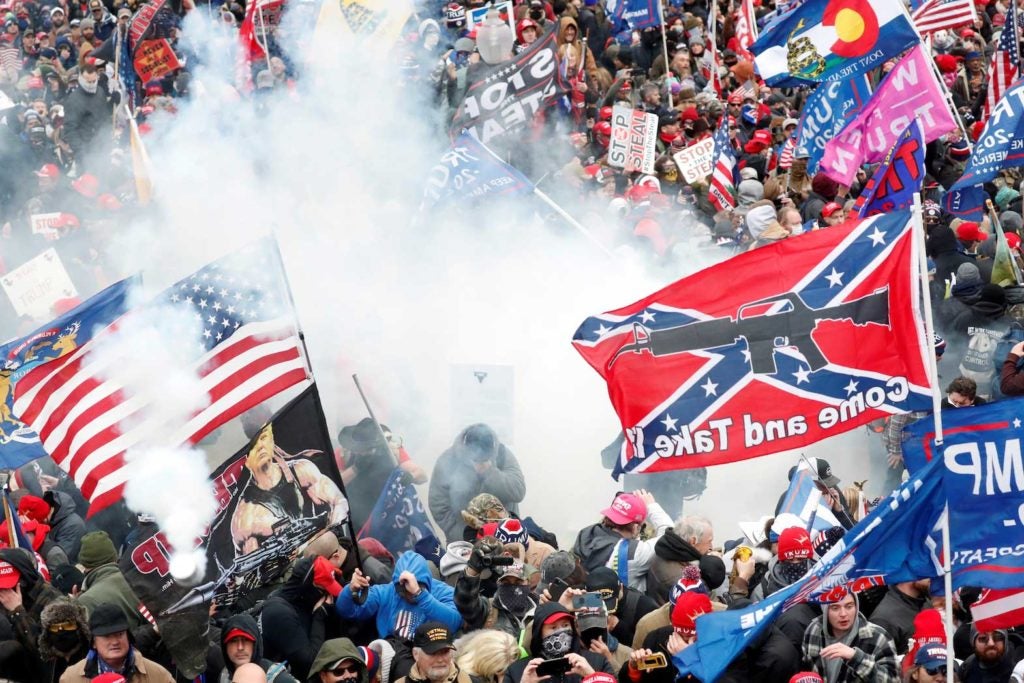 Tear gas is released into a crowd of protesters, with one wielding a Confederate battle flag that reads “Come and Take It,” during clashes with Capitol police at a rally to contest the certification of the 2020 U.S. presidential election results by the U.S. Congress, at the U.S. Capitol Building in Washington, U.S, January 6, 2021. REUTERS/Shannon Stapleton

LEVELLAND, Texas – Pat Cowan, a Republican official in west Texas, would rather blow up her party than see it controlled by “weak” Republicans who increasingly are distancing themselves from President Donald Trump since the U.S. Capitol riots he is accused of inciting.

“You can’t tell those Republicans from the Democrats!” she scoffed in an interview at her home in Levelland, Texas.

Like many others here in Hockley County, where Cowan is the party chairwoman, she believes Trump’s baseless claims that he was robbed of a Nov. 3 election victory by voter fraud. She’s incensed at the handful of Texas Republicans in the U.S. House of Representatives who certified Democrat Joe Biden’s election win in the hours after the storming of the Capitol on Jan. 6. She’s even angrier at the 10 Republican House members from other states who voted to impeach Trump for allegedly inciting the insurrection.

“That has led a lot of us to think that we’re just going to have to come up with a new party,” she said, “and I think that Trump is going to lead it!”

Cowan’s stark view of the party’s future – echoed by many of the two dozen Texas voters and party officials interviewed by Reuters – underscores how Trump, after four years of dividing the nation, now has done the same to his own party. Many Republican candidates in solidly conservative states like Texas face intense pressure to perpetuate Trump’s false election-fraud narrative as voters make loyalty to Trump a litmus test for their support in future elections. That loyalty was on display last week in the Texas state legislature as several Republicans introduced bills to restrict voting access, including limits on mail-in voting and early voting, citing a need to prevent fraud.

In Georgia, turmoil wracked the party during two ultimately failed campaigns by Republican candidates for the U.S. Senate as Trump attacked Republican Governor Brian Kemp and Secretary of State Brad Raffensperger over their refusal to help him overturn his Georgia election loss. A billboard in Forsyth County, a rural Trump stronghold, last week called Kemp and Raffensperger “treasonist RINOs” – Republicans in name only – who should be jailed. In Arizona, the state party will soon vote on whether to censure prominent Republicans including Cindy McCain – wife of the late Senator John McCain – for being insufficiently loyal to Trump.

Other Republicans, however, warn that caving to Trump loyalists could irreparably damage a party that has already lost the White House and both houses of Congress under Trump’s watch. Several Republican strategists said politicians backing Trump’s false election-fraud claims may see short-term rewards – but at the cost of undermining their own voters’ faith in U.S. elections, along with the party’s credibility and unity in the long term.

“The predicate of the nation’s problems – and the party’s problems – going forward is that too many Republicans have promoted the falsehood that the election was stolen,” said Rob Stutzman, a Republican strategist in California who advised the 2008 presidential campaign of Senator Mitt Romney, who is now among the sharpest Republican critics of Trump.

Alice Stewart, a longtime strategist who served as head of communications for Texas Republican Senator Ted Cruz’s 2016 presidential campaign, said the most important thing Republicans can do now is to “stop lying.”

Of the seven Texas representatives who affirmed Biden’s win, only two – Kevin Brady and Kay Granger – are from districts that are Trump strongholds, where their stand could endanger their future election prospects, according to a Reuters review of voting patterns in Texas house districts in the November election. Trump has often threatened to “primary” disloyal Republican lawmakers – meaning, to back a Republican challenger in their primary elections. Neither Brady nor Granger responded to requests for comment.

The other five members came from more moderate Texas districts with relatively high percentages of Democratic voters, the Reuters review showed. Those members face far less political risk by voting to approve Biden’s win, and may even be rewarded by moderate, anti-Trump voters for doing so.

Texas Representative Van Taylor, who represents a largely suburban district north of Dallas, is among those who voted to affirm the results. His district is less conservative than many others in Texas: 43% of votes cast there in the November House election came from Democrats.

Still, Taylor treaded carefully in a brief interview with Reuters in explaining his vote, avoiding any direct criticism of Trump. Taylor acknowledged that Biden won the election legitimately, but said he voted to affirm the Electoral College results on the basis of a constitutional argument that Congress should defer to states’ certified vote counts. He said he supports investigations into fraud allegations and into state election rule changes that enraged many Trump supporters.

“Restoring people’s confidence in the electoral process is really important,” he said.

Texas Republicans who opposed the certification of Biden’s win backed colleagues calling for a forensic audit of votes in Arizona’s Maricopa County and raised general objections that states such as Pennsylvania had unfairly changed voting rules amid the coronavirus pandemic.

Democrats say such arguments presage a protracted assault on voting rights by Republicans, who generally do poorly in high-turnout elections. Democrat Lina Hidalgo, the top elected official in Harris County, which includes Houston, said Trump’s baseless claims are fueling the Texas Republicans’ attacks on voting rights. Hidalgo is credited with spearheading an effort in Houston to expand access in the Nov. 3 election with measures such as drive-through voting stations to protect voters during the pandemic. She called Texas lawmakers’ claims of election fraud akin to arguing “the world is flat” or “man didn’t really land on the moon.”

In 2019, a federal judge ruled that the Texas secretary of state’s review of registered voters to find non-citizens had unfairly targeted naturalized citizens. That forced the secretary to rescind an advisory questioning the citizenship of nearly 100,000 voters.

Briscoe Cain is among the Republican state lawmakers in Texas who have introduced bills that Democrats say undermine voting rights. He argues they are meant to protect a compromised election system.

“The integrity of our election system is linked to whether or not people have faith in our system of government,” Cain said.

Cain volunteered as an attorney for the Trump campaign’s failed effort to overturn the election results in Pennsylvania. Across all the election battleground states, Trump and his allies filed more than 60 lawsuits. None succeeded in proving election fraud and many provoked harsh condemnations from judges citing their lack of evidence.

While many establishment Republicans hope Trump’s influence will fade, they recognize his power within the party.

“If Trump opens his own media channel and goes on the road with Trump rallies and claims that he really won the election … that would probably tear the party apart,” said Stutzman, the Republican strategist.

Some Republican strategists, however, argue the president’s closest allies – and most fervent promoters of his fraud claims – will face even more political fallout over time.

In west Texas, while many Trump supporters are turning against Republicans who repudiate the president’s fraud claims, some have more nuanced views on how the party should move forward.

Some, like Josh Stevens, the mayor of Lamesa, Texas, allow that they do not necessarily believe that election fraud caused Trump’s loss, while maintaining that voter fraud is a bigger problem than Democrats admit.

Stevens says it’s time for hardcore Trump supporters to learn how to compromise. He warned that outlandish behavior like the pandemonium at the Capitol or continuing to insist there was a massive election fraud could kill Trump’s movement.

“What you don’t do is throw on your f—king flak jacket, get your AR-15 and walk around out there, waving your gun like you’re Rambo just to prove a point,” he said. “That kind of extremism is completely unproductive.”