Trump mob tried to lynch Congress, are you next?

Trump mob tried to lynch Congress, are you next? 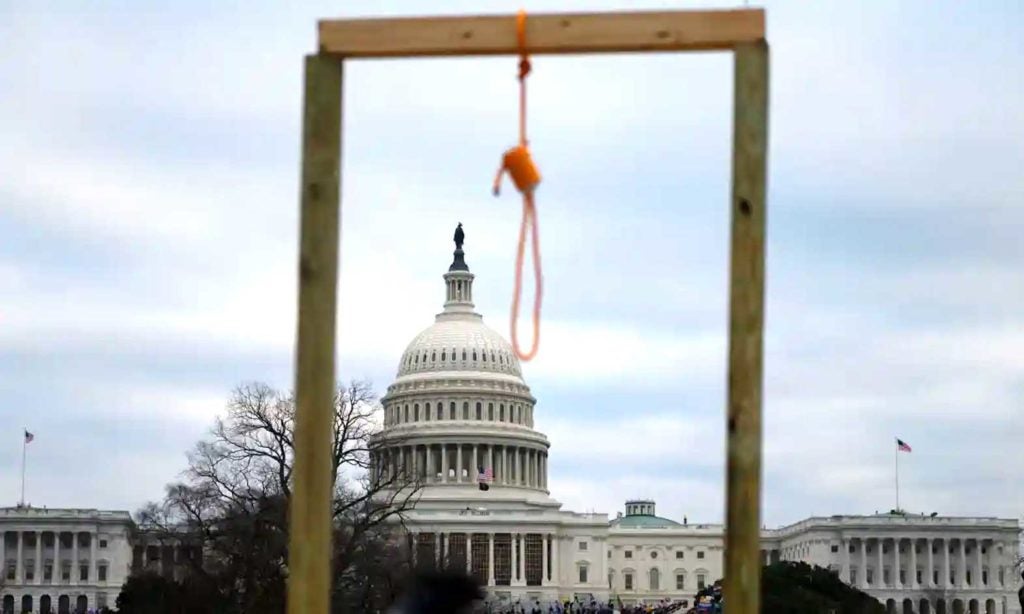 A noose is seen on makeshift gallows as supporters of Donald Trump gather outside the Capitol.  Andrew Caballero-Reynolds/AFP

My immediate Twitter reaction to Wednesday’s riot was: “This is the “white power” movement of Trump on full display. Built on lies, the “normal” GOP has no control. Sadly, It’s the new third party of America.”

Let others talk about how if the rioters were BLM protesters, we’d have way more than five dead. Yes, the double-standard is real. But the racist motivation goes deep.

We need to acknowledge that this wasn’t just a protest whipped up by Trump’s false claims that the election was stolen.

These were the people—the majority of whom are white and on the margins–who were enabled politically by Trump. They were always there. They just never were legitimized or had a voice until they were dubbed the “Trump base.” They are conspiracy theorists, gun nuts, and white supremacists. They  are as right-wing as they are white.

Last Wednesday, the base showed us they will do anything for Trump. Even when the ask is based on lies.

They were coming for Congress this time. But based on their hatred of the “other,” their target could easily have been you.

The Trumpists see themselves aggrieved in a country that is demographically running away from them. Through immigration and birthrates, these riotous whites are losing out. And Trump is their hero who will stand up to all BIPOC (Blacks, Indigenous, People of Color) with  racist, anti-immigrant, and xenophobic policies.

Just look at all the Confederate flags, symbols of white supremacy, along with other neo-Nazi signs of white nationalism.

Filipinos in America shouldn’t be  deluded. We’ve been on the racists’ radar since we were colonized by the USA in 1898  and made victims of discrimination all through our lives.

Not a part of your life? I assure you the base sees you historically. They weren’t just coming for Congress on Wednesday when they stormed the Capital.

They were coming for you.

When Trump’s fanatics have gone amok, it’s time for some national reflection. What is our democracy about? Are we a part of it? What does it really stand for?

In the aftermath of last Wednesday’s insurrection, I’ve had the luxury of nursing a stunned silence. Perhaps, to pray.

Was I seeing this correctly—Trump declaring war on Congress? That’s what it seemed like. It leaves us with this dilemma: Can we allow the president to stay in office after he urged his seditious supporters to riot?

That’s how I felt as I watched the Capitol being ransacked and pillaged, not by an enemy force, but by our fellow Americans. There was a sinking feeling in my heart for our country and our government.

At least five are dead from the Trump riot, likely another presidential super-spreader event. At the same time, as many as 4,000 have died each day from coronavirus, a record. And now we must seriously contemplate ending sooner than later one political life—that of Donald J. Trump.

The headlines say it all. The New York Times was most succinct. “Trump Incites Mob.”

It speaks of culpability and responsibility, and the bad actors are clear. There is no doubt what happened. And Trump was “enthusiastic” as he watched on TV, according to, news reports.

We must demand accountability.

A potentially great day spoiled
I worked on the Hill for the 103rd Congress and considered it a privilege to serve as a press secretary and speechwriter to the legendary Asian American political icon, Rep. Norman Mineta.

Whenever I took a coffee break, it was more than that. All I did was explore the Capitol. It was a reminder of the greatness of our democracy. Simply walking around that building and its marbled staircases and tunnels was for me, the son of a colonized American immigrant from the Philippines, an amazing journey through history, and into what it means to be American.

And now we were witnessing the grand citadel of our nation being disgraced by the president and his followers draped in Trump flags—all of it a sign that they pledge allegiance to a very un-American idea.

Is one man ever above the law? Not in our democracy. And to think, Wednesday started out as a great day for Asian Americans.

It was a display of diversity and democracy to be proud of — 77 percent of the Asian American voters were foreign-born, naturalized citizens, joining in with the 23 percent of U.S.- born Asian Americans to form an undeniable bloc with other voters of color.

That was something to cheer about early Wednesday morning.

But then Trump added Georgia to his growing list of unfounded election complaints, spoke at a rally in front of the White House, and urged his supporters to storm the Capitol.

As Congress met to perform the ceremony of certifying the electoral college ballots, they were disrupted by the Trump mob.

I was getting chilled seeing what was happening to our country. Doors being bashed in. Intruders in the building. But what I felt was nothing like what Asian American Rep. Grace Meng of New York was experiencing.

She was forced off the House floor to join her colleagues in an undisclosed safe room for five hours.

“I got really nervous. I really had the feeling that even if someone were to be able to open the door or harm me, that the police might not get to me in time. So I texted some of my family and my close friends and just said I loved them,” she said on NBC News.

To its credit, Congress didn’t back down. Both houses returned to finish the certification ceremony late Wednesday night into Thursday morning. The votes of Americans would not be nullified by the mob. Joe Biden and Kamala Harris won, fair and square, and were certified as the new President and Vice President.

Yet some legislators had the gall both to condemn the violence of the rioters and continue the Trump charade of contesting the votes. In California, the most Asian American state in the nation, House Republican leader Kevin McCarthy took the both sides approach of Senator Ted Cruz (R-Texas) and Sen. Josh Hawley (R-Missouri) to decertify a free and fair election.

Cruz and Hawley are the ringleaders, the self-serving anti-patriots who want to be “Trump the Sequel,” or what I call “Better Trumpers.”  Are they really? They’ll justify their actions and hide behind debate wonkiness and procedure. But they do act not in the public good. Their acts disqualify them from public service.

There is still more to do after certification. How do we end the ongoing threat of the Trump presidency?

Even with days left, the threat is real. Trump may be banned from Twitter permanently, and Facebook, but he is still able to start a war and do damage far beyond the nation’s capital.

“Well, I really want to see people being held accountable,” Rep.  Meng said on CNN as she recalled what the president’s followers did to our democracy. “A message must be sent. There must be ramifications. There must be consequences.”

And so how do we play the last few holes?

That’s what Trump would say, as if he had a few more to play. On Thursday night, he issued a non-concession concession video on Twitter. It was worse than a non-apology apology.

He lied about deploying the National Guard and federal law enforcement “immediately.” He then betrayed his mob. “The demonstrators who infiltrated the Capitol have defiled the seat of American democracy,” Trump said on the video. “You do not represent our country. And to those who broke the law. You will pay.”

Was he talking of himself? The possibility of mass pardons? The president can’t walk any of this back. He was empowered by the GOP. Then he empowered the fringe right that includes racists with and without hoods. And now he is disowning them?

What happens when those folks realize Trump was lying to them? Do they storm Mar-a-Lago?

What do they think when Trump says Congress has certified the results and that his focus now turns to “ensuring a smooth orderly and seamless transition of power”? Was that his admission of a lie?

Trump didn’t even specifically reverse his belief that the election was stolen. Nor did he mention Biden by name. He ended the video, saying “our incredible journey is only just beginning.” WHAT? THERE’S MORE?

What journey into what kind of incredibly deceitful fantasy hell is he talking about? Who wants to be part of that?

Trump’s current and former associates are coming out of the woodwork, such as former chief of staff Gen. John Kelly calling Trump a “deeply flawed human.” Not my choice of “f’ word, but damning still.

Congress can set up impeachment like a supermarket express lane. The country will be safe and Trump leaves with  9 items or less. The draft resolution is circulating calling for impeachment on the grounds of “incitement of insurrection.”

It’s a better, quicker option than invoking the 25th Amendment to remove Trump. Besides, everyone now wants to be on the record to condemn the mobster president. Even some Republican enablers can’t wait to save their own tails by going on the record to say their penance.

And forget about there not being enough time.  Apparently, the issue can spill over into the new Congress, when Democrats will have control of the Senate.

That makes Trump’s double-impeachment more than just a Ben and Jerry’s flavor. It’s no liberal pipe dream. Just consider how a conviction this time in the Senate would keep Trump from ever running for a federal public office again. That would allay the fears many Republicans have of Trump voter spill over.

But will that be the case in two years? Four years? Of course, since Trump also announced on Friday that he won’t be attending the Biden’s inauguration—the signature move of the sore loser—I’d say he might as well resign.

He can leave on a chopper, like Nixon, and declare how we “won’t have Trump to kick around anymore.” To American democracy’s eternal relief and glory. If not, then double-impeachment, here we come.

Emil Guillermo is a journalist and commentator. He writes a column for the Inquirer.net’s North American Bureau.  Twitter @emilamok. His vlog commentaries are at www.amok.com