Film on threats to PH press freedom to air on PBS

Film on threats to PH press freedom to air on PBS 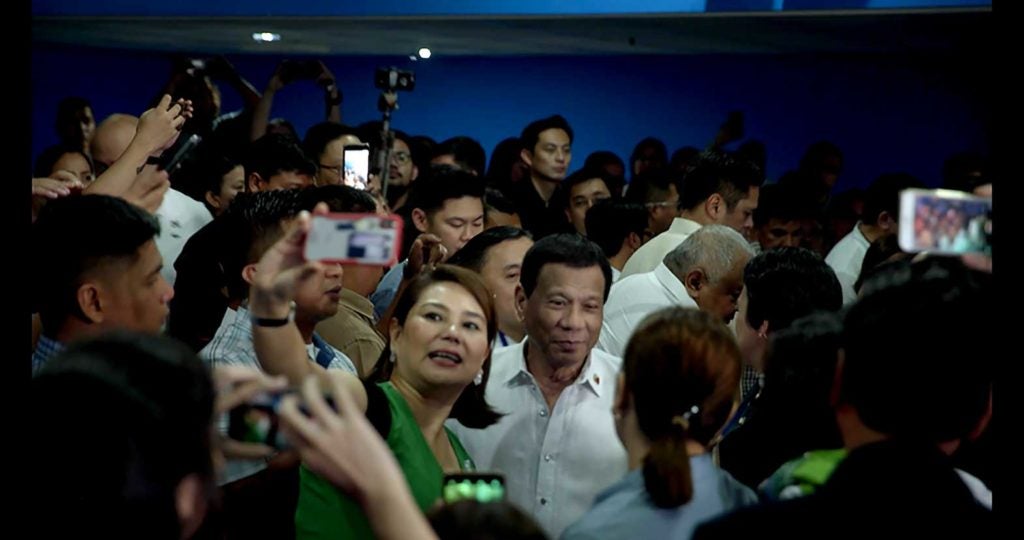 A scene from “A Thousand Cuts,” a documentary by Ramona Diaz on press freedom in the Philippines. It airs tonight, Friday, on PBS. FRONTLINE/PBS

Maria Ressa packs her luggage in a hotel room as her sister voices concern about the risks involved with her job.

Her sister is worried, but Ressa remains determined — despite the risks — to continue holding those in power accountable.

“The only way to not be afraid is to understand the worst case scenario and embrace it,” she tells her sister in scene toward the end of “A Thousand Cuts,” an award-winning documentary that follows Ressa, co-founder of the online news site Rappler, who has become a target in the Duterte administration’s crackdown on the press, and other journalists.

The documentary, which was released in early 2020, will air tonight, Friday, Jan. 8 on PBS FRONTLINE at 9 p.m. Eastern Time/8 p.m. Central Time. The broadcast will be followed by a conversation with Ressa and the film’s director and producer, Ramona Diaz, moderated by CNN anchor Christiane Amanpour. The film will also be streamed online and on YouTube where it will be available indefinitely. It will also be available to stream in the PBS Video App and PBS Documentaries Prime Video Channel.

Rappler has been critical in its coverage of the Duterte administration’s war on drugs, and its Executive Editor Ressa faces nine charges for cyber libel, tax evasion and securities fraud. She believes they’re politically motivated and meant to stop Rappler from asking questions and challenging power.

She has been arrested and has posted bail nine times throughout the last several years. In June, she was convicted of cyber libel, for which she could face up to six years in prison.

“We stand with fellow journalists like Maria Ressa in their quest for the truth, and we are proud to bring her story to our PBS audiences,” FRONTLINE executive producer Raney Aronson-Rath said in a statement. “The current events in the Philippines along with her conviction and the shutdown of one of the main television networks illustrates the looming threats against press freedom that could begin to happen everywhere.”

Since the documentary was released about a year ago, several developments have occurred in Ressa’s life and in Philippine media. One is the cyber libel conviction in June, and her ninth charge in November.

Ressa said she’s unsure where the cases she faces are headed.

The month after her conviction, the government shut down broadcast network ABS-CBN, which has closely coveredthe Duterte administration’s war on drugs. She also saw several dozen organizations unite to establish the Hold the Line Coalition to support press freedom and independent media.

Ressa said that the government’s attempts to obstruct journalists from doing their jobs fuels her to continue investigating what’s happening.

“Every time we get attacked again, I keep thinking, we must be missing a story. Why does the government not want to be held accountable?” she said.

Diaz said that since the documentary was released, it has become more relevant across the globe.

“In the middle of a pandemic, we thought it won’t be as relevant,” she said. “But we were wrong because during the pandemic, the importance of good leadership is even more salient.

“A Thousand Cuts” is Diaz’s fifth film. Some of her previous work includes “Imelda,” a 2004 documentary about the former first lady Imelda Marcos, and “Motherland,” a 2017 documentary about reproductive health and justice in the Philippines. Both have received multiple awards.

Diaz said she initially sought to create one about the drug war, but shifted the focus after spending time with Ressa while she did research for the documentary.

“What really attracted me to her story was that she was able to unpack the story of disinformation so clearly, and connect it to impunity and abuse of power and press freedom with such clarity,” she said. “It transcended the very specific local story of the drug war and made it more universal.”

Ressa’s prominence grew while Diaz chronicled her journey for the film. She became one of TIME Magazine’s Person of the Year in 2018, one of the publication’s most influential people of 2019 and is one of its most influential women of the century.

“You can’t write that,” Diaz said. “You can’t ever plan for that. It’s like catching lightning in a bottle.”

“A Thousand Cuts” throughout the past year has received high praise and recognition, including the award for Best Documentary at 2020 DocEdge Festival. Ressa and Rappler later this month will receive the Truth to Power Award at the 36th International Documentary Association.

“Because this story is global, because it’s happening in real time and it has a lot of consequences, I think it’s hitting more people,” Diaz said.

Diaz said she hopes the airing of “A Thousand Cuts” on FRONTLINE will keep Ressa’s story alive.

“There are real consequences on the ground for her,” she said. “And I think the story of press freedom in the Philippines is a cautionary tale for the U.S.”

She also hopes the documentary will prompt viewers to think about how they consume information.

Ressa said the film will show that people are more alike than they are different, a sharp contrast to the divisiveness the Duterte and Trump administrations have sown by emphasizing differences.

She noted that for social media to become the world’s largest distributor of news and for it to be able to manipulate people around the world indicates that, regardless of country or culture, people are biologically the same.

“Where the erosion of democracy begins is in the distribution of news,” she said. “I hope this film is a call to action that in your area of influence, that you sort fact from fiction, that you stand up for values that get lost. I think if we don’t do something about it as a global community, democracy will die.”