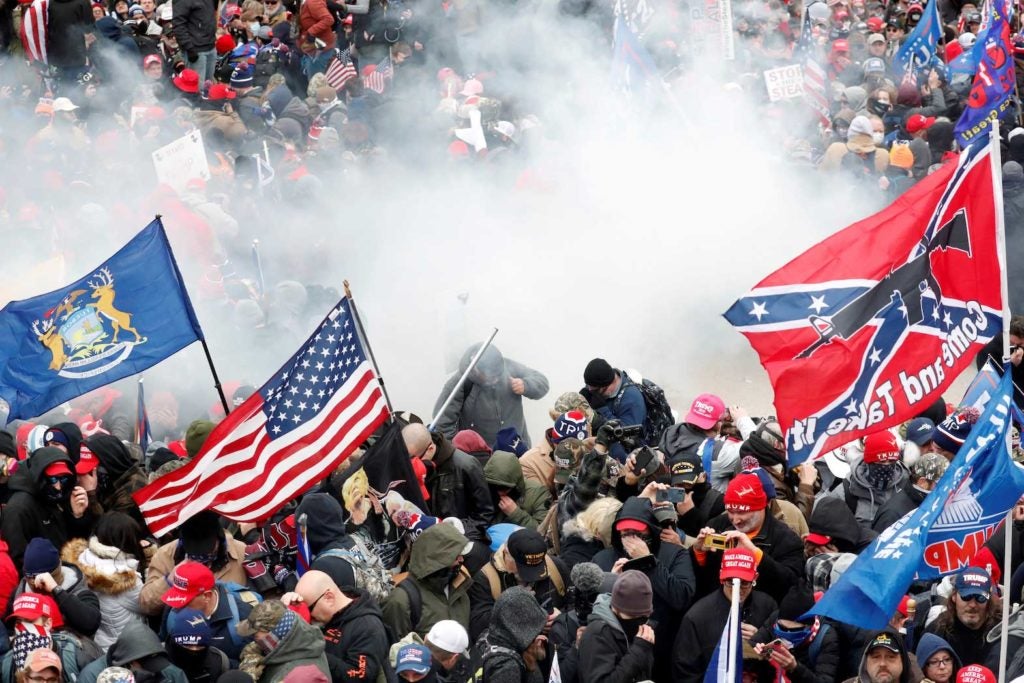 Tear gas is released into a crowd of protesters during clashes with Capitol police at a rally to contest the certification of the 2020 U.S. presidential election results by the U.S. Congress, at the U.S. Capitol Building in Washington, U.S, January 6, 2021. REUTERS/Shannon Stapleton/File Photo

WASHINGTON – President Donald Trump faced growing calls for his removal and a staff exodus on Thursday, one day after a pro-Trump mob stormed the U.S. Capitol in a harrowing assault on American democracy.

While Trump has just 13 days left in his term, there were numerous demands for his ouster including by the Senate’s top Democrat and a Republican congressman. Congress early on Thursday formally certified Democratic President-elect Joe Biden’s election victory despite objections from some Republican lawmakers.

Members of Trump’s Cabinet and allies of the Republican president have discussed invoking a provision of the U.S. Constitution to remove him from office, a source familiar with the situation said.

Senate Democratic Leader Chuck Schumer called on Vice President Mike Pence to remove Trump under the Constitution’s 25th Amendment, which allows Cabinet members to oust a president who has been incapacitated. At least one Republican and 19 Democrats in the House of Representatives also called for that step.

“What happened at the U.S. Capitol yesterday was an insurrection against the United States, incited by the president,” Schumer said in a statement. “This president should not hold office one day longer.”

“If the vice president and the Cabinet refuse to stand up, Congress should reconvene to impeach the president,” he added.

The Democratic-led House impeached Trump in December 2019 on charges of abuse of power and obstruction of Congress after the president pressured Ukraine to investigate Biden, but the Republican-led Senate in February 2020 voted to keep him in office.

Republican Representative Adam Kinzinger called for the 25th Amendment to be invoked to remove Trump.

“All indications are that the president has become unmoored, not just from his duty or even his oath, but from reality itself,” Kinzinger said in a video he posted on Twitter.

A source familiar with the situation said the 25th Amendment effort was unlikely to go anywhere. Most Republicans in Congress have shown little interest in pressuring the Cabinet to act in that fashion.

Democratic Senator Amy Klobuchar said Trump’s Cabinet should be ready to act, as Trump could stir up more trouble in his remaining time in office.

“They better be ready to do that if it continues because you cannot have a president basically leading an insurrection against our own country’s government,” Klobuchar said on CBS.

Trump pledged in an early-morning statement an “orderly transition” ahead of Biden’s inauguration, in part to prevent more staffers from leaving. Yet Trump has continued to repeat the falsehood that the election was stolen from him.

Trump also has not condemned the extraordinary violence that unfolded after he encouraged supporters on Wednesday to march to the Capitol, despite pleas from senior members of his administration.

Wolf’s deputy, Ken Cuccinelli, said on Fox News that new fencing was being installed around the Capitol ahead of Biden’s inauguration.

The assault on the Capitol was the culmination of months of divisive and escalating rhetoric by Trump and his allies around the Nov. 3 election, with the president repeatedly making false claims that the vote was rigged and urging his supporters to help him overturn his loss.

Rioters broke windows and besieged the House chamber while lawmakers were inside, banging on its doors. Security officers piled furniture against the chamber’s door and drew their pistols before helping lawmakers and others escape.

The FBI asked the public for tips on identifying people involved in the mayhem in which four people died.

Biden said on Wednesday that the activity of the rioters “borders on sedition” and represented an “insurrection.”

The violence came on the day that Biden’s fellow Democrats secured narrow control of the Senate with victories registered in two Georgia runoff elections held on Tuesday.

In certifying Biden’s election triumph, longtime Trump allies such as Pence and Senate Majority Leader Mitch McConnell rejected Trump’s pleas for intervention. The Senate and the House rejected two objections by Republican lawmakers to the tally and certified the final Electoral College count, with Biden receiving 306 votes and Trump 232 votes.

McConnell, who had long remained silent while Trump sought to overturn the election results, chastised other Republicans who stalled certification. He called the invasion a “failed insurrection.”

“They tried to disrupt our democracy,” McConnell said on the Senate floor. “They failed.”

The shock of the assault seemed to soften the resolve of some Republicans who had supported Trump’s efforts to reverse his election loss. Several Republican senators who had said they would mount objections to the electoral vote count changed their minds when they returned to the chamber.

Two objections – to the vote tallies in Arizona and Pennsylvania – were voted down resoundingly in both the House and the Senate.

“All I can say is count me out. Enough is enough,” Senator Lindsey Graham, one of Trump’s staunchest allies in Congress, said on the Senate floor.

Election officials of both parties and independent observers have said there was no significant fraud in the election. Biden received 7 million more votes than Trump in the national popular vote.