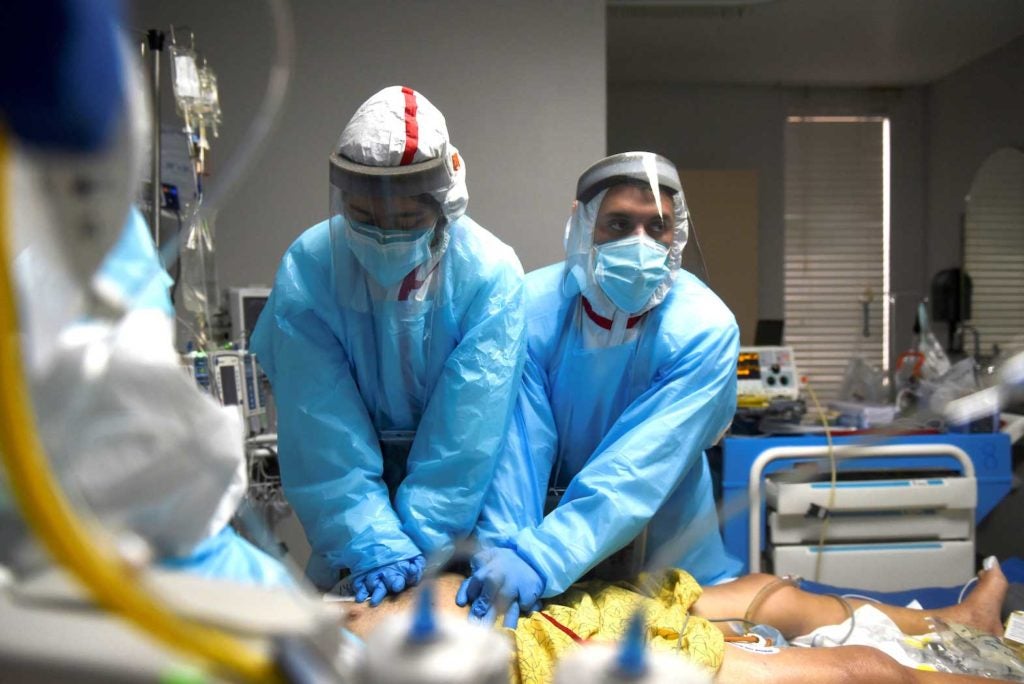 WASHINGTON – Americans were warned again on Tuesday not to travel for Christmas as the latest COVID-19 surge left hospitals struggling to find beds for the sick and political leaders imposed restrictions to try to curb new infections, making for a grim holiday season.

A new, even more contagious variant of the coronavirus quickly spreading across Britain caused more fear in Americans already weary from nine months of the pandemic and prompted talks among top U.S. officials to ban travel from the United Kingdom

The new coronavirus variant has emerged as the United States grapples with a nationwide spike in infections that added more than a million new cases in just six days, according to a Reuters tally, a total of more than 18 million since the pandemic began.

In California, an epicenter of the latest surge, intensive care unit (ICU) beds were scarce and hospitals said they lacked enough doctors and nurses to care for patients.

“The whole California ICU capacity has been going down. We are all struggling,” said Dr. Imran Mohammed of Sutter Roseville Medical Center, north of Sacramento. “We really don’t want to see more than this. We will be challenged to see further ICU patients and we will have no place eventually.”

Many U.S. states and cities have imposed lockdowns and business closures to try to get a handle on a wave of illness driven by last month’s Thanksgiving gatherings.

Political leaders have asked Americans to stay home for the upcoming holidays to prevent a surge upon the surge threatening to overwhelm healthcare systems, a request that many have defied.

The U.S. Centers for Disease Control and Prevention (CDC) said on Tuesday that the altered coronavirus had not yet been detected in the United States.

U.S. Health Secretary Alex Azar told Fox News that the Pfizer/BioNTech and Moderna vaccines, which received U.S. emergency use authorizations this month, should work against the new variant.

Moderna Inc and BioNTech SE, which worked with Pfizer Inc to develop its vaccine, are scrambling to test their shots against the new virus mutations, but expressed confidence in them.

“Scientifically it is highly likely that the immune response by this vaccine can also deal with this virus variant,” BioNTech Chief Executive Ugur Sahin told reporters.

More than 600,000 Americans had received their first COVID-19 vaccine doses as of Monday, according to the CDC.

The first wave of shots have so far gone to healthcare workers and nursing home residents, as well as some top government officials.

Americans in “non-essential” jobs have been told they would likely wait months for their turn.

Azar and Dr. Anthony Fauci, the top U.S. infectious disease official, received the Moderna shot on live television on Tuesday. President-elect Joe Biden was inoculated with the Pfizer/BioNTech vaccine in front of cameras on Monday.

The White House coronavirus task force has no plans to restrict travel from the UK, people briefed on the matter said on Tuesday.

But Michael Osterholm, one of Biden’s pandemic advisors, said all options needed to be considered, suggesting that the U.S. government could mandate a 14-day quarantine for visitors from the UK.

Washington Governor Jay Inslee has ordered a 14-day quarantine for travelers arriving from the UK, South Africa or other “countries with circulation of a new, potentially more contagious COVID-19 variation.”

New York Governor Andrew Cuomo said he asked airlines to add his state to a list of 120 countries that require COVID-19 screening for incoming air travelers.

“The United States should say the same thing that New York said. Say that people need to test before they come from the UK,” Cuomo said on a Tuesday call with reporters.