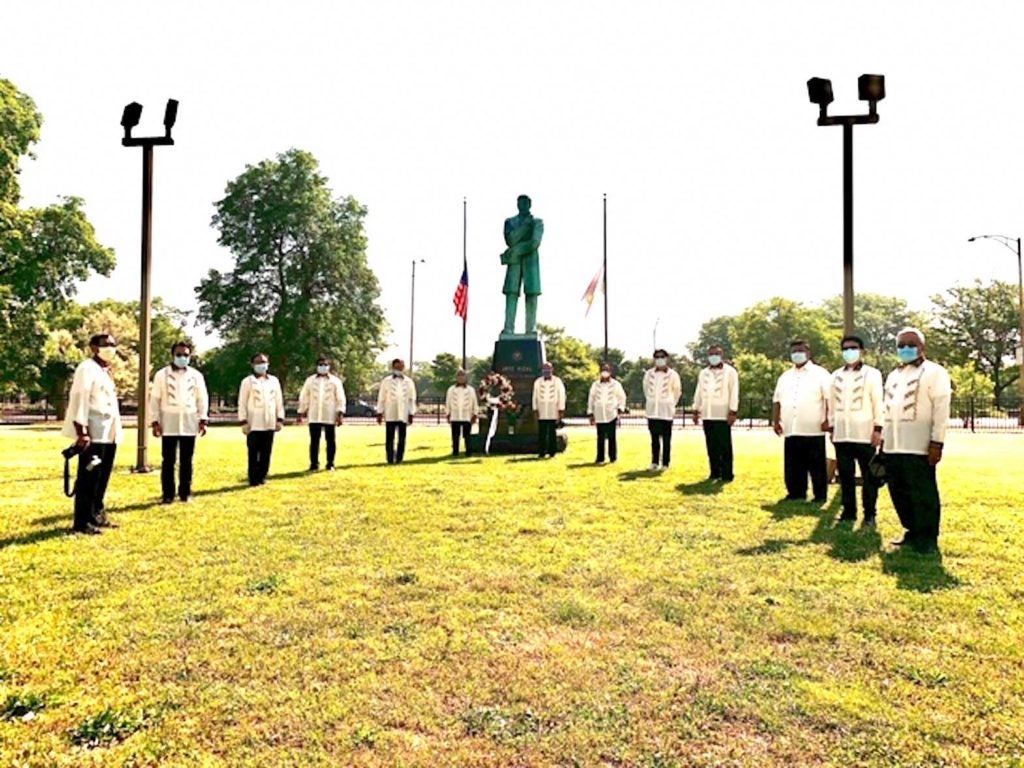 Knights of Rizal in the Central USA area as shown in front of the Rizal Monument at Chicago’s Margate Park, June 19. After a floral offering to mark the 159th birthday of Jose Rizal in time of the pandemic–observing social distancing. Another floral offering will be held on Dec. 30 (PINOY photo by Manny Zambrano)

CHICAGO—The 124th year anniversary of the martyrdom of Philippine National Hero, Dr. Jose Rizal will be marked by the Central USA Area Knights of Rizal with a virtual commemoration on Zoom, Dec. 29, Tuesday, 5 pm,(CST) in sync with the Manila event at the Rizal Park event on Dec. 30, Wednesday, 7 am. ( Philippines is 14 hours ahead of the U.S. Central Standard Time)

Rizal was executed by musketry on Dec. 30, 1896 few minutes after 7 a.m. in Bagumbayan, now the Rizal Park in Manila, on the spot where his monument stands. This is also his tomb where his remains were interred 16 years after he was initially buried without a coffin in a shallow grave at the Paco Cemetery shortly after he died at age 35.

Dr. Ramon Lopez, a great grandnephew of Rizal and a retired physician at a Chicago suburb, will deliver the main message on the Dec. 29 virtual event. This was announced by the KOR Central USA Area Commander Mariano “Anong” Santos, KGOR, who also said that the KORs will join the Chicago Philippine Consular officials who are scheduled  to do the traditional flower offering on Dec. 30, 9 am, at the Rizal Statue at this city’s Margate Park.

Deputy Consul General Ryan Gener, KCR, is also the Chapter Commander of the KOR Maynilad Chapter which along with  the Chicago, Malaya, Magiting and the Lincolnland Chapters will participate in the unprecedented Zoom event. The Manila commemoration will be led by the KOR Supreme Commander, Sir Justice Elihu A.Ybanez, KGCR.

Dr. Lopez will speak on the historic significance of Rizal’s works and ideals; and whose death helped accelerate the revolt against the Spanish colonizers in the Philippines. Included in the ceremony will be the installation of Manuel Zambrano as the new chapter commander of the KOR Chicago Chapter which lost its commander, Delfin Masangcay, KCR, who died of cancer last October.