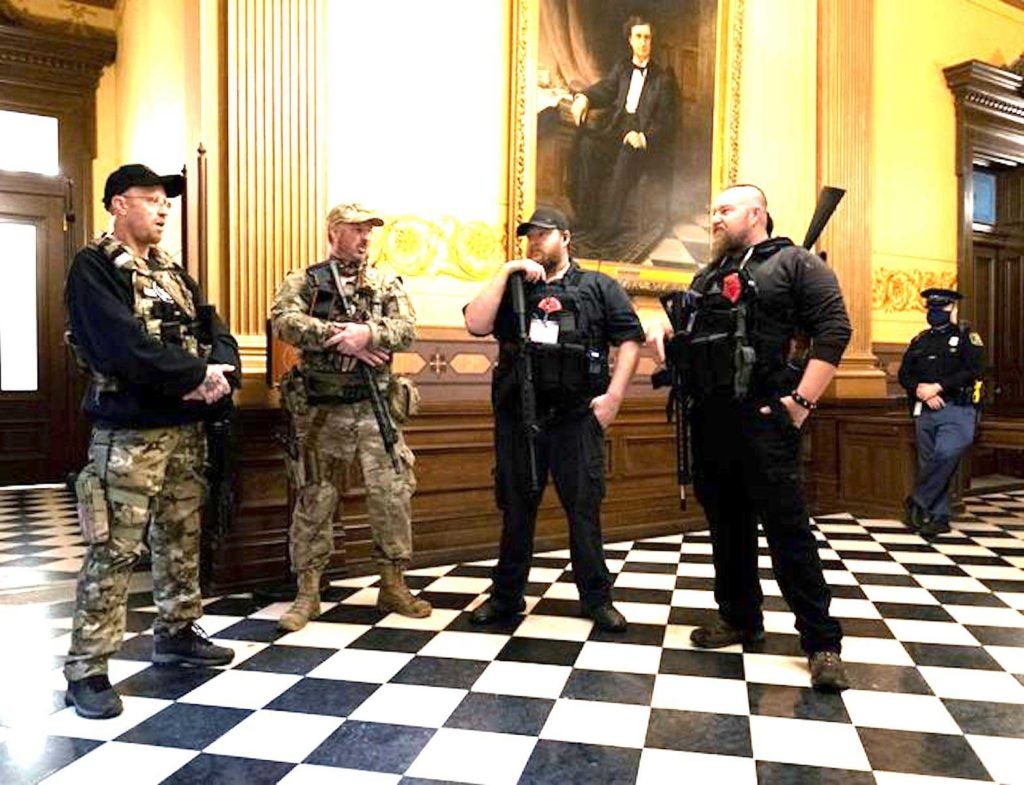 In this file photo, members of an armed group stand near the doors to the chamber in the capitol building before the vote on the extension of Governor Gretchen Whitmer’s emergency declaration/stay-at-home order due to the coronavirus disease (COVID-19) outbreak, in Lansing, Michigan, U.S. April 30, 2020. REUTERS/Seth Herald

Six men facing charges of plotting to kidnap Michigan Governor Gretchen Whitmer were indicted by a grand jury this week, the U.S. attorney’s office for western Michigan said on Thursday.

The men — Adam Fox, Barry Croft, Ty Garbin, Kaleb Franks, Daniel Harris and Brandon Caserta — were arrested and charged in October with conspiring to grab Whitmer, a Democrat, from her vacation home earlier this year.

Some of the men belong to an anti-government militia group called Wolverine Watchmen. At least one of the defendants, Fox, considered Whitmer to be a sort of tyrant because she had ordered gyms closed in the state to stem the spread of the novel coronavirus, according to prosecutors.

Obtaining the grand jury indictments, which came down on Wednesday, was a necessary step to proceed with the federal prosecutions, the U.S. attorney’s office said in a statement.

Parker Douglas, a lawyer representing Harris, said Harris had pleaded not guilty because “there was no actual conspiracy to kidnap Governor Whitmer.”

Lawyers for the other defendants did not immediately respond to requests for comment.

If convicted at trial, the defendants, who are in jail after being denied bail, would face a maximum sentence of life in prison.

The indictment accuses the men of discussing kidnapping Whitner, meeting in July in Wisconsin to practice using assault rifles, and surveilling Whitmer’s vacation home in August and September, mapping out how far it was from the nearest police station.

Some of the men also bought supplies for kidnapping, the indictment said. In September, Fox bought a Taser-style stun gun and placed a $4,000 order for explosives with someone he did not realize was, in fact, an undercover agent with the Federal Bureau of Investigation.