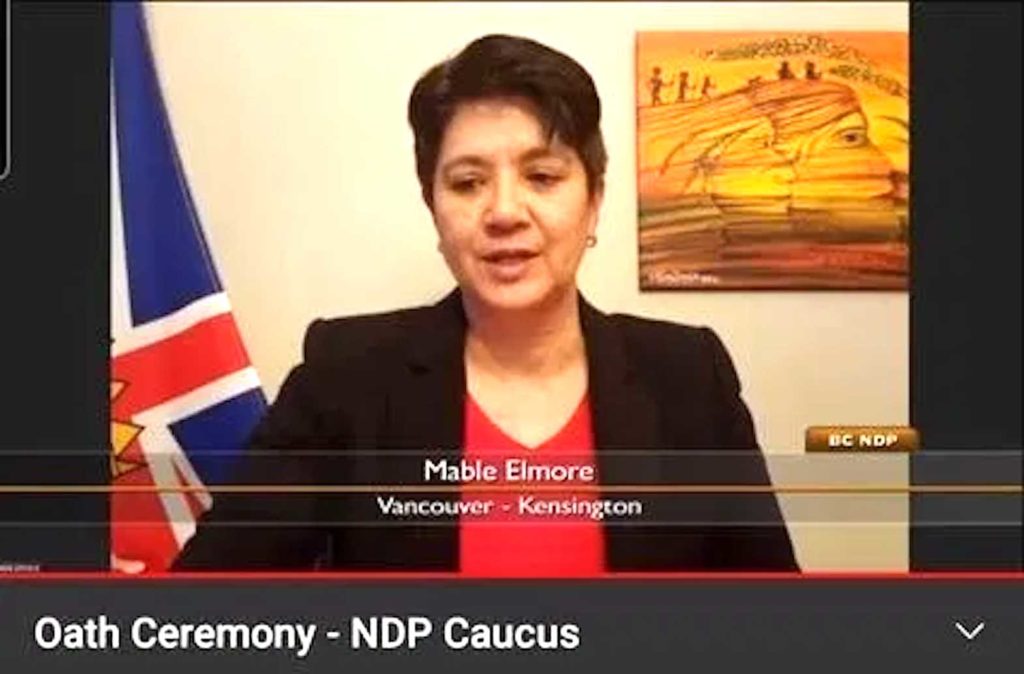 Member of the Legislative Assembly Mable Elmore, however, was appointed as Parliamentary Secretary to Seniors Services and Long Term Care under Health Minister Andrian Dix  who has been retained as minister.SCREENGRAB

VANCOUVER, B.C. – In yet another perceived bypass, B.C.’s first and only Filipino Canadian member of the Legislative Assembly has been left out of the new provincial cabinet.

Elmore, however, was appointed as Parliamentary Secretary to Seniors Services and Long Term Care under Health Minister Andrian Dix  who has been retained as minister.

“I’m deeply humbled to be sworn in for a 4th term as MLA for Vancouver-Kensington.  I’m also grateful for the opportunity to serve as Parliamentary Secretary for Senior Services and Long Term Care in a BCNDP majority government.  I look forward to working on this file to ensure the interests of all British Columbians are served,” Elmore said in a statement released shortly after her swearing-in.

She was in an upbeat mood when reached by Philippine Canadian news.Com (PCN.com). “I appreciated the efforts of the Filipino community to see me appointed to the cabinet  and I think it was a good exercise in understanding how to make informed decisions,” she told PCN.com.

She believes the lobbying efforts “struck a chord” among the community given that 65 organizations signed the petition.

She looks forward to working with Health Minister Adrian Dix who shares a neighboring riding with her. “I have an excellent relationship with the minister as well as other members of the caucus,” she adds.

The one-time transit bus operator and union organizer said she is enjoying her years as an MLA and pointed to the fact that for the health care workers, it has come “full circle” with the election of the NDP.

During the last Liberal government, workers were contracted out and the industry was privatized. The NDP changed all that and workers now enjoy work environments they had before.

“I am pleased by the commitment by our government in the fight against Covid,” she says.  The government made a significant move to have health care workers work in “single sites” and standardized their wages to a “living wage.”

Elmore, first elected MLA for Vancouver-Kensington in 2009, was never in the running for cabinet according to local pundits in the media.

Premier Horgan had a surfeit of MLAs out of the 57 elected to choose from to form his cabinet and Elmore faced some very stiff competition.

Elmore made history by becoming the first MLA of Filipino heritage. Mable was re-elected in May 2013 and May 2017. She had served as the Parliamentary Secretary for Poverty Reduction in the last government and previously served as the Official Opposition spokesperson for ICBC, and deputy spokesperson for Finance.

Understandably, a lot of her supporters are disappointed but the community should still be proud to have one of their own in the cabinet table, albeit in a junior position.