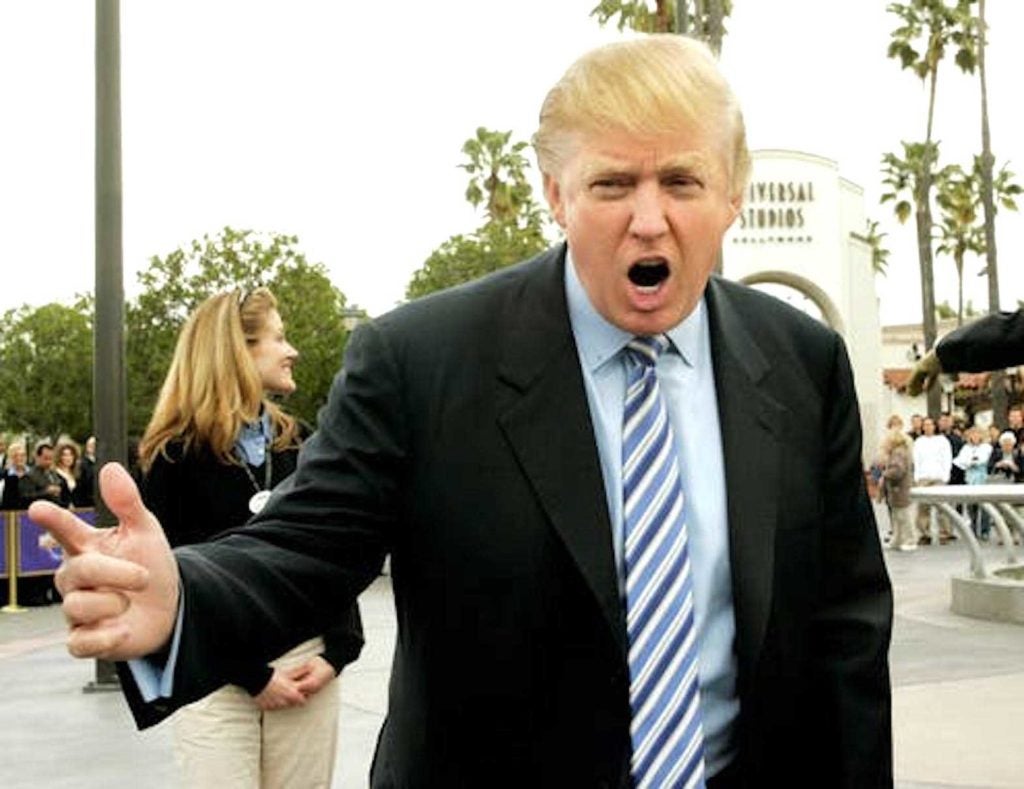 You’re fired! Donald Trump shouts his catch-phrase at a 2006 casting call for The Apprentice. Fred Prouser/Reuters

NEW YORK—The four-year nightmare is over. We can begin to dream once more, though the dream of a more perfect union seems farther away than ever before, thanks to the moral turpitude, idiocy, and boundless narcissism of Donald J. Trump, the worst president in US  history.

He utterly and totally failed at being the CEO of the United States of America. If a candidate performed as badly as he did on his reality TV show “The Apprentice,” Trump would have fired him straightaway. Of course, lacking any introspective faculty, or any faculty for empathy, compassion, and irony, he would not, nor could he, fire himself.

Yes, he will probably persist with a raft of nonsensical lawsuits that aim to delay the inevitable. This is the only path he knows: that of the bully, the sore loser, the spoiled brat, the demagogue, the fascist.

Anderson Cooper of CNN had a perfect description—and comical putdown—of the Liar-in-Chief, who on November 5th, held a press briefing at the White House. He claimed, without a shred of evidence, that he had won the election, that all voting had to stop (in fact, it had, on November 3rd), and that Democrats were attempting to steal the election.

In response, Cooper said this: “We see him like an obese turtle on his back, flailing in the hot sun, realizing his time is over.” Apologies, of course, to all turtles, as I am positive Cooper didn’t mean to insult the creatures. Otherwise, it is an apt analogy. Certainly, Trump is obese. Certainly, what he was doing, and continues to do so, is to flail, meant as a take-charge strategy but really an indication of a rapidly crumbling power base. And of well-founded fears, of having to deal with all the charges against him as a regular citizen, no longer protected by the armor of the presidency.

A more apt animal comparison might be the proverbial bull in a china shop. It references not just porcelain ware but the country, which Trump has blamed for the spread here of COVID-19—his handling of which has been massively disastrous—when in fact the cases that first affected the US were from Europe. However, a bull is known for its bravery, straightforwardness, and tremendous strength—and Trump notably lacks all three traits. Quite the contrary. So, apologies to the bull. Except of course for the fact that out of the mouth of Orange Man emerges a tremendous amount of BS. At least with our taurine creature the BS comes from the proper orifice.

Given that so many observers have said that Trump has poisoned democracy, the more logical comparison would be to a venomous snake. A copperhead, perhaps? According to Webster’s, this is a pit viper with, as the name indicates, a copper-colored head. A much more telling and apt comparison with absolutely no need to apologize to snakes. Naturally, the copper-headed president surrounded himself with equally venomous reptilian creatures. Just recently, Steve Bannon, former adviser to Trump and a well-known far-right extremist, suggested a medieval punishment for Christopher Wray, the F.B.I. director, and Dr. Anthony Fauci, for their critiques of administration policies, would be a beheading. Bannon stated in a video, “I’d put [the heads] at the two corners of the White House as a warning to federal bureaucrats: You either get with the program or you’re gone.”

Trump and his lovely brood of vipers are coming undone, both by their criminal proclivities and by COVID-19—poetic payback for their disregard of science-based safety protocols for steering clear of the dreaded virus.

As disturbing as this fountain of ineptitude is, more disturbing is the fact that considerable segments of the populace have bought wholesale his snake oil. In this regard, one’s name can be destiny. Knowingly or not, Trump has lived up (or down) to his name. A good friend and poet pointed out, per Webster’s, that “trumpery” is a Middle English word, for deceit, from the French tromperie, hence trompe l’oeil, to deceive the eye; the modern English would be “worthless nonsense; trivial or worthless articles: junk.” The verb “trump up”  means “to concoct, especially with intent to deceive.”

The day can’t come too soon when Trump and his malevolent gang slither off the stage.  Other snakes remain, unfortunately, in the garden of democracy, ensconced in the Senate.  One might consider Steve Bannon’s proffered solution as the answer—metaphorically speaking, of course. Copyright L.H. Francia 2020