Two conservative U.S. high court justices suggest Obamacare may not be thrown out

Two conservative U.S. high court justices suggest Obamacare may not be thrown out 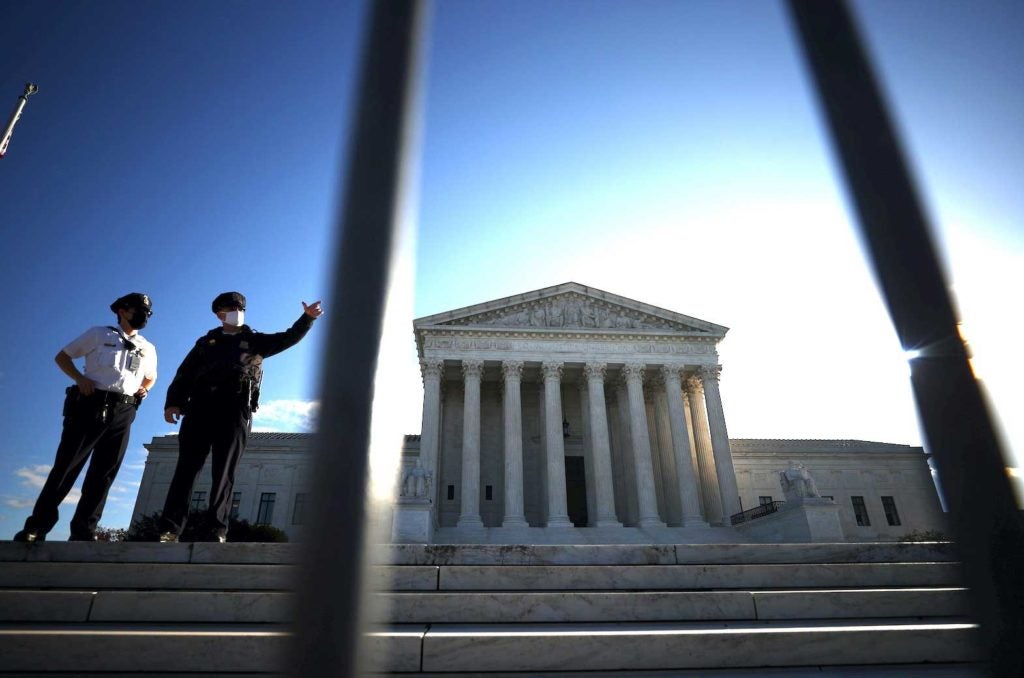 WASHINGTON (Reuters) – The U.S. Supreme Court on Tuesday grappled with whether all of Obamacare should be thrown out in a challenge by Republican-governed states, backed by President Donald Trump’s administration, with two conservative justices suggesting the law should remain intact even if one provision is struck down.

The justices were hearing a scheduled 80 minutes of arguments by teleconference in an appeal by a coalition of Democratic-governed states including California and New York and the Democratic-led House of Representatives to preserve Obamacare.

President-elect Joe Biden has criticized Republican efforts to throw out the Affordable Care Act (ACA), as the law is formally known, in the midst of a deadly coronavirus pandemic and hopes to buttress Obamacare after taking office on Jan. 20.

Chief Justice John Roberts and fellow conservative Brett Kavanaugh both asked questions that suggested they were skeptical of Republican arguments that all of Obamacare must fall even if one provision, known as the individual mandate, is found to be unconstitutional. That provision required people to obtain insurance or pay a financial penalty.

“It’s hard for you to argue that Congress intended the entire Act to fall if the mandate was struck down,” Roberts said, noting that Congress did not repeal the entire law in 2017 when it eliminated the financial penalty under the individual mandate.

Roberts and Kavanaugh appeared to agree that the mandate to buy insurance can be severed from the rest of the law.

Texas and the other Republican-governed states, later joined by Trump’s administration, sued in 2018 to strike down the law.

Conservative justices indicated they think the Republican challengers had the proper legal standing to bring the legal challenge by describing similar scenarios in which someone might be able to file suit over a government mandate even if there is no penalty.

Liberal Justice Sonia Sotomayor questioned whether the Republican states had standing, saying their alleged injuries are not related to the individual mandate.

The case represents the latest Republican legal attack on the 2010 law, which was the signature domestic policy achievement of Democratic former President Barack Obama, under whom Biden served as vice president. The Supreme Court in 2012 and 2015 fended off previous Republican challenges to it.

The Supreme Court has a 6-3 conservative majority after the Republican-led Senate last month confirmed Trump’s third appointee, Amy Coney Barrett. Most legal experts think the justices will stop short of a seismic ruling striking down Obamacare.

If Obamacare were to be struck down, up to 20 million Americans could lose medical insurance and insurers could once again refuse to cover people with pre-existing medical conditions. Obamacare expanded public healthcare programs and created marketplaces for private insurance.

Texas-based U.S. District Court Judge Reed O’Connor in 2018 ruled that Obamacare was unconstitutional as currently structured in light of a Republican-backed change made by Congress a year earlier.

The New Orleans-based 5th U.S. Circuit Court of Appeals last year partially upheld that ruling, saying the law’s individual mandate ran afoul of the Constitution. But the 5th Circuit stopped short of striking down the law. The Democratic-led states and the House then appealed to the Supreme Court.

The 2012 Supreme Court ruling upheld most Obamacare provisions including the individual mandate. The court defined this penalty as a tax and thus found the law permissible under the Constitution’s provision empowering Congress to levy taxes.

Donald Verrelli, the lawyer representing the House, told the justices that the Republican challengers were “asking this court to do what Congress refused to do when it voted down repeal of the ACA in 2017. But their argument is untenable.”

“The Affordable Care Act has been the law of the land for 10 years,” Verrelli added. “The healthcare sector has reshaped itself on reliance on the law. Tens of millions of Americans rely on it for health insurance that they previously could not afford and more rely on the law for its protections and benefits.”

Michael Mongan, California’s solicitor general, told the justices that “what Congress did here was to create an inoperative provision. It doesn’t require anybody to do anything.”

“Why the bait and switch?” Roberts asked Verrelli in relation to the Democratic arguments that losing the mandate would not scuttle the law, which is not what they argued in the Supreme Court’s 2012 case. Then, Verrelli represented the Obama administration in defending Obamacare.

Verrelli responded that Congress actually adopted a “carrot and stick” approach in adopting Obamacare and that “it turned out that the carrot worked without the stick.”