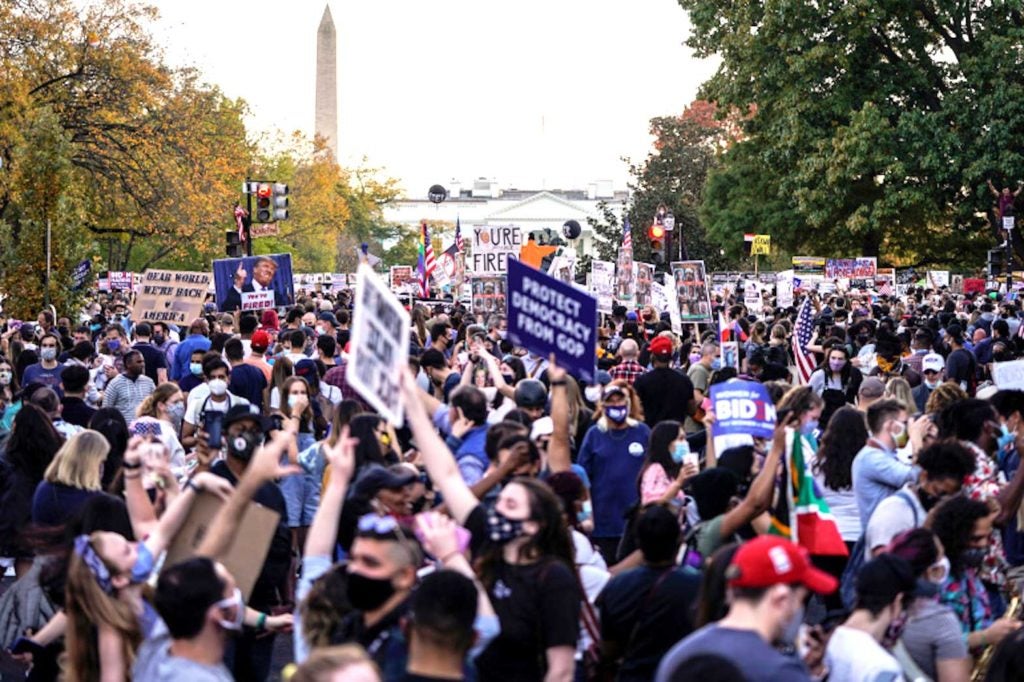 Does “People Power” ring a bell? It was part of Filipino history. Now an American version, a “People Power Lite” has occurred in the U.S.

Toppling Marcos is equivalent to toppling Trump? Read on. It’s been a rough and tumultuous four years, accented by an Election Day that turned into a week. But by noon Saturday ET, our long national “countmare” was finally over.

The media companies (I was watching CNN) prudently waited until there was no chance for a Trump electoral comeback. Philadelphia’s mail-in ballots were all it took to declare Joe Biden the newly-elected 46th President of the United States.

I had to close my weary eyes for a moment. Watching red and blue electoral maps and digital vote counts round the clock since Tuesday takes its toll. But that’s me. The nation was about to combust. Not my quiet little small town California community, where no one talks politics out of politeness or puts up a sign for fear of alienating the neighbors, to the left or right.

But surely in the big cities, from Washington, DC and New York to Oakland and Los Angeles, a reaction was building up.

People hit the streets, masked up, for the most part, but no one took the time to social distance. I guess that’s the death- defying part. The virus is still real. But Trump has been more real. And now the votes were counted and Americans  just wanted to be together, united, in one spontaneous eruption of democracy.

As I said watching it all on Saturday reminded me of the Philippines in the ‘80s when “People Power” ousted dictator Marcos.

This was a pale American version.

Trump wasn’t technically a dictator. But he stretched his autocratic tendencies to the max with his executive orders that turned our institutional norms of governing on its head.

For much of the Trump administration, the country was on the brink of one constitutional crisis after another. It was so bad, we’d all become inured to it all. Some Americans even got coopted, and enabled the president. Even on election night, when Trump was saying “Stop the count” and declaring he had won the election already, or suggesting the election was stolen from him, some were egging him on.

Just think of the Trump legacy of Muslim bans, wall rhetoric,  s***hole countries, children pulled from their mothers at the border, random ICE checks, DACA obstacles, Census chaos, and abnormal affection for Kim and Putin, not to mention impeachment, Stormy Daniels, conservative judges, and a federal deficit of $3.1 trillion.  And this is just a partial list.

He did all that and more, and made us doubt ourselves as a country and as Americans. That guy will soon be a former resident of 1600 Pennsylvania Avenue. The Donald Trump presidency now has an expiration date.

On Saturday, we could stop holding our breath and let out a massive collective exhale. And now we can feel what it’s like to be on the same team again. That was the Biden-Harris message on Saturday night.

Unity and history
I’ve been talking about the coming New America since 1989 at least.

Suddenly, I could feel the history through my TV screen when I saw Oakland-born Kamala Harris, the daughter of a Jamaican father and an Indian mother, step up as Vice President-elect at the victory rally in Wilmington, Delaware Saturday night. 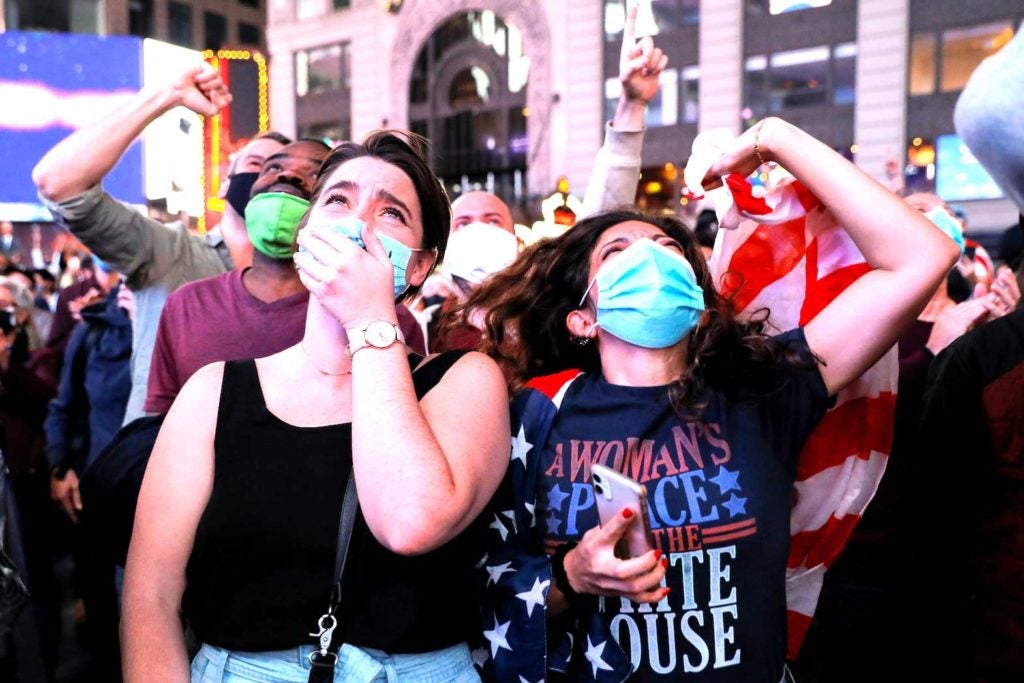 “While I may be the first woman in this office, I will not be the last,” she said as the crowd cheered. “Because every little girl watching tonight sees that this is a country of possibilities. And to the children of our country, regardless of your gender, our country has sent you a clear message. Dream with ambition, lead with conviction, and see yourselves in a way others may not simply because they’ve never seen it before.”

It was a message not just to little girls, but to all who yearn for inclusion.

Every Asian American, every person of color held back by the self-doubts imposed on them by systemic racism heard the message loud and clear.

But Harris also assured she’d be a vice president to all, even to those who didn’t vote for her. She set up the theme that Biden would drive home.

Ending the ‘grim era of demonization’

I first heard of the idea of “demonization” when people referred to Saddam Hussein during the Gulf War. But it didn’t take long for it to become a standard strategy in our domestic politics. By 2016, it enhanced Trump’s bullying non-empathetic style.

Biden was its antithesis. And it showed on Saturday. He reached out to everyone.

“Special thanks for the entire nation,” Biden said from the stage at his rally. “I’m proud of the coalition we put together, the broadest and most diverse coalition in history. Democrats, Republicans, independents, progressives, moderates, conservatives, young, old, urban, suburban, rural, gay, straight, transgender, white, Latino, Asian, Native American.”

And then he gave a special shout out to the Black community.

“When this campaign was at its lowest ebb, the African American community stood up again for me,” Biden said to wild honking and cheering.

Unlike Trump, who never reached out to non-supporters, Biden did.

To all of the 71 million who voted for the other guy, Biden said it was time to listen to each other again, and to stop treating opponents as our enemies. “They’re Americans,” Biden said to his parking lot celebrants, before turning to a biblical phrase to emphasize that this was a time “to heal in America.”

“I will work as hard for those who didn’t vote for me, as those who did,” said Biden, the All American president.  “Let this grim era of demonization in America begin to end here and now.”

Biden mentioned policy matters, such as forming a task force to fight the coronavirus, which Trump has downplayed since the beginning. A methodical scientific national approach to testing and fighting the virus is finally on its way. And it comes almost a year after the current president knew about it and did nothing.  In the meantime,  the nation continues to set daily case records and the death toll has risen to more than 237,000 Americans.

Biden also mentioned health care, the economy and climate change. But the important thing was to get  all of America on the same page quickly.

Biden and Harris did that on Saturday, though it’s still not clear what the current president will be doing from now until January. Playing with lawyers? Negotiating an exit strategy? Figuring out how to self-pardon? Like a do-it-yourself confession?

After tweeting early Saturday  morning in all caps “I won this election, BY A LOT,” Trump was out golfing most of the day.

He’d better start thinking about his departure more seriously. Will there even be a Trump concession? Is he even qualified to run a string of NYC hot dog carts? Good thing I’m vegan.

Maybe it doesn’t matter. When Pennsylvania ballots went for Biden and the race was won, the country showed it was more than ready to move on and follow a new leader.

It was People Power,  American style. A record-setting election turnout of over 150 million votes. Trump bragged about getting 71 million votes himself. But he forgot to say he lost.

We are eager for his peaceful departure.

Emil Guillermo is a journalist and commentator. He has written his “Emil Amok” column since 1995. Twitter @emilamok See his podcast videos at www.amok.com