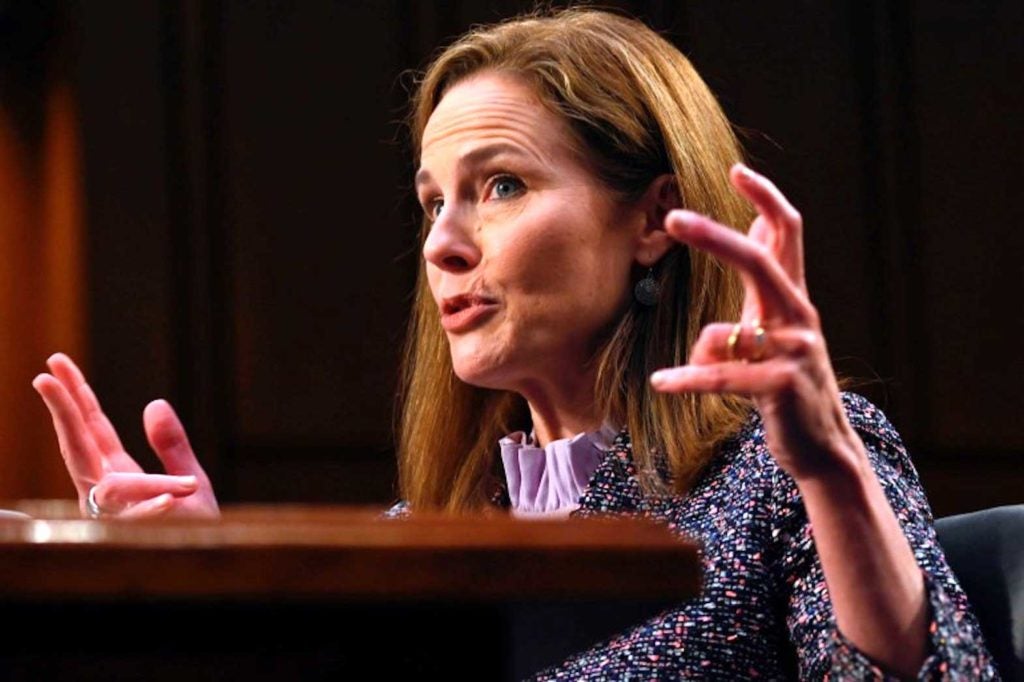 New Justice Amy Coney Barrett: Her first opportunity to weigh in on and issue could come soon. REUTERS

Abortion opponents were among those most excited by the addition of Justice Amy Coney Barrett to the Supreme Court. And they had good reason to be.

As a law professor and circuit court judge, Barrett made it clear she is no fan of abortion rights. She is considered likely to vote not only to uphold restrictions on the procedure, but also, possibly, even to overturn the existing national right to abortion under the Supreme Court’s landmark rulings in Roe v. Wadeand Planned Parenthood of Southeastern Pennsylvania v. Casey.

Her first opportunity to weigh in could come soon. A Mississippi ban on abortions after 15 weeks — impermissible under existing court precedents — is awaiting review by the justices, who could decide as early as this week to take up the case.

That’s the headline. But many overlook other things that could flow from a new abortion jurisprudence — such as erasing the right to birth control that the court recognized in a 1965 case, Griswold v. Connecticut. During her confirmation hearings, Barrett specifically refused to say whether she felt Griswold was correctly decided.

That was a flashing red warning light for Nancy Northup, president of the Center for Reproductive Rights, a legal advocacy group that argues cases on abortion and contraception. Roe, said Northup, is part of a century of jurisprudence based on the idea that the Constitution protects the liberty of individuals. “It began with cases about how one educates one’s children, and includes same-sex marriage, contraception and abortion,” she said. “You can’t just take Roe out and not unravel the whole fabric.”

Yet from what Barrett has said and written about the Constitution, continued Northup, “it’s clear she doesn’t believe it protects the right to personal liberty.”

Abortion rights advocates worry that the court could go beyond overturning Roe and Casey. If those precedents are overturned, abortion decisions would return to the states. But the court could go a step further and recognize “fetal personhood,” the idea that a fetus is a person with full constitutional rights from the moment of fertilization. That would create a constitutional bar to abortion, among other things, meaning even the most liberal states could not allow the procedure.

amendments were on the ballot in several states about a decade ago. They were rejected by voters even in conservative states like Mississippi after opponents argued that recognizing life at fertilization would outlaw not just abortion, without exceptions, but also things like in vitro fertilization and many forms of contraception, including some birth control pills, “morning after” pills, and intrauterine devices (IUDs) that some think could cause very early abortions by preventing a fertilized egg from implanting in the uterus. (More recent scientific evidence suggests nearly all those methods actually prevent ovulation, not  implantation.)

But an abortion law passed in Georgia in 2019 not only includes a ban on abortion at the point a heartbeat can be detected — often before a woman is aware she is pregnant — but also has a fetal personhood provision. Georgia is appealing a federal district court ruling that struck down the law as a violation of Roe.

Proponents of these personhood provisions are cautiously optimistic. “It looks like there will be a court more friendly to a challenge to Roe,” said Les Riley, interim president of the Personhood Alliance, the group pushing the concept. “But to some extent we’ve been down this road before.”

Previous courts since the early 1990s that were thought poised to overturn Roedid not.

And even if the court were to uphold a law like the Mississippi ban it is considering now, he said, “all that’s saying is they agree that states can regulate or ban abortion at 15 weeks. What we want to do is have the factual reality that life begins at conception recognized in law.”

Mary Ziegler, a law professor at Florida State University who has written two books on the abortion battle, said the court wouldn’t have to recognize fetal personhood to threaten many forms of contraception.

States could effectively ban contraception by arguing that some contraceptives act as abortifacients, she said. The court has already opened the door to this argument. In the 2014 Hobby Lobby case, it allowed some companies to decline to offer birth control coverage otherwise required by the Affordable Care Act to their employees. The owners of the companies that brought the suit said they believe some contraceptives are a form of abortion, and the court said the requirement violated their religious freedom. The court used a similar reasoning in a 2020 case exempting the Roman Catholic order Little Sisters of the Poor from even having to sign a paper that would officially exempt them from the ACA contraceptive mandate.

Medical groups and the federal government don’t consider any form of contraception approved by the Food and Drug Administration an abortionequivalent, because the standard medical definition of the start of pregnancy is when a fertilized egg implants in the uterus, not when sperm and egg first unite. Yet the court has not always followed science on the issue.

Still, Ziegler said, “personhood has always been the endgame” for abortion foes, not simply overturning Roe, which would let each state decide whether to outlaw abortion. “Allowing states to leave abortion legal has never been the endgame,” she said.

Interestingly, however, Riley of the Personhood Alliance said that while he hopes his side will win eventually, he is not necessarily hoping that win will come from the Supreme Court.

“We think the strategy has been misguided for years,” he said. “Right now, five justices can overturn anything. That’s not the system of government our founders had in mind.”

Rather, he said, his organization is working more at the state and local level “to lay the groundwork of people’s hearts being changed.”