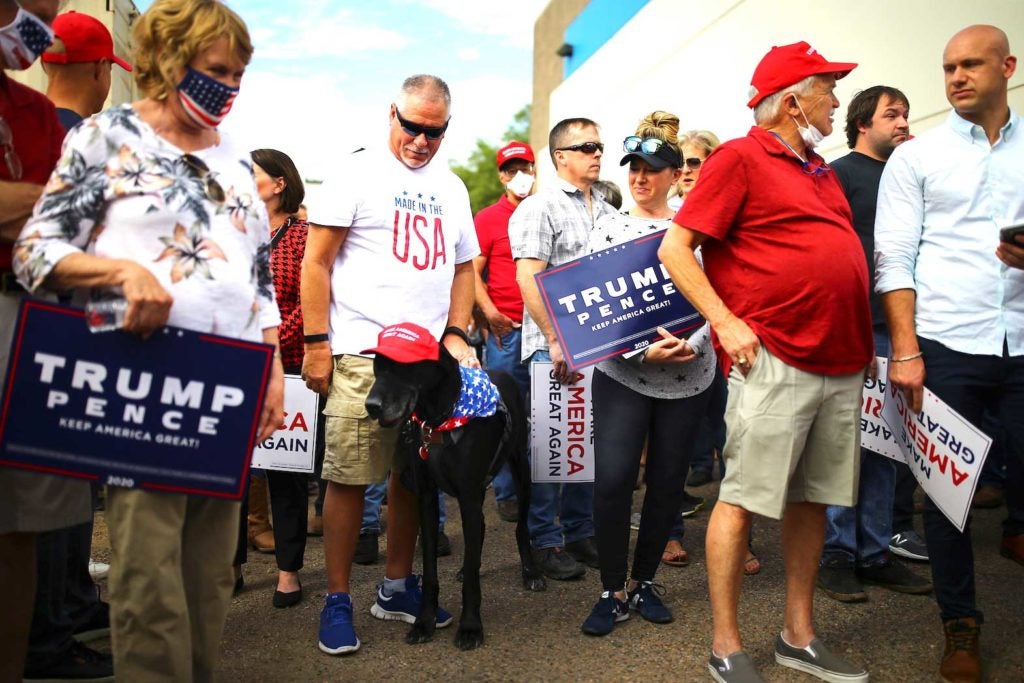 KENOSHA, Wis./PITTSBURGH – President Donald Trump and Democratic rival Joe Biden made a last-ditch push for votes in battleground states on Monday as their campaigns prepared for post-election disputes that could prolong a divisive presidential election.

Trump, who is trailing in national opinion polls, has continued to lob unfounded attacks at mail-in ballots, suggesting he would deploy lawyers if states are still counting votes after Election Day on Tuesday.

Trump told reporters on Monday evening that Pennsylvania’s plans to count mail ballots that arrive up to three days after Election Day would lead to widespread cheating, although he did not explain how.

He urged the U.S. Supreme Court to reconsider its decision that left the extension in place. The court has left that possibility open.

“Bad things will happen and bad things lead to other type things,” he told reporters in Wisconsin, another battleground state.

On Twitter, Trump said the court decision would “induce violence in the streets.” The social media platform flagged his message, adding a disclaimer to the tweet that its content was “disputed” and “might be misleading.”

It is not unusual in the United States for states to take several days or even weeks to count their votes, and a record surge in mail ballots could draw out the process further this year.

The election has prompted an unprecedented wave of litigation over whether to adjust voting rules in light of the COVID-19 pandemic.

Both sides have amassed armies of lawyers who are prepared to take on post-election battles.

On Monday, a federal judge in Texas rejected a Republican bid to throw out about 127,000 votes already cast at drive-through voting sites in the Democratic-leaning Houston area.

In Pittsburgh, Biden told supporters that the country’s future rested in their hands.

Trump, 74, is seeking to avoid becoming the first incumbent president to lose re-election since fellow Republican George H.W. Bush in 1992. Despite Biden’s national polling lead, the race in swing states is seen as close enough that Trump could still piece together the 270 votes needed to prevail in the state-by-state Electoral College system that determines the winner.

Trump has spent the final days of the campaign predicting victory and deriding Biden for backing restrictions that aim to slow the spread of the coronavirus.

“A vote for Biden is a vote for lockdown, misery and layoffs,” he told the crowd in Scranton.

Many Democrats said they were nervous about the results after expecting Trump to lose handily in 2016. “I’ll be honest, I’m a little worried,” said Patti Cadoso, 41, a medical school administrator who attended a Miami rally hosted by former Democratic President Barack Obama.

“That’s what a two-bit dictator does,” he told a rally in Miami. “If you believe in democracy, you want every vote counted.”

After visits to North Carolina and Pennsylvania, Trump headed to Wisconsin and Michigan – four states he won narrowly in 2016 but that polls show could swing to Biden this year. As he has done for months, the president spoke to large crowds, where many attendees eschewed masks and social distancing despite the resurgent COVID-19 pandemic.

Biden, 77, who has made Trump’s handling of the pandemic the central theme of his campaign, spoke in Ohio and Pennsylvania to much smaller gatherings.

The latest Reuters/Ipsos poll in Florida, a perennial swing state, showed Biden with a 50%-46% lead, a week after the two were in a statistical tie.

Early voting has surged to levels never before seen in U.S. elections. A record-setting 98.4 million early votes have been cast either in person or by mail, according to the U.S. Elections Project.

The number is equal to 71.4% of the entire voter turnout for the 2016 election and represents about 40% of all Americans who are legally eligible to vote.

That unprecedented level of early voting includes 60 million mail-in ballots that could take days or weeks to be counted in some states, meaning a winner might not be declared in the hours after polls close on Tuesday night.

Some states, including critical Pennsylvania and Wisconsin, do not start processing mail-in votes until Election Day, slowing the process.

Trump has repeatedly said without evidence that mail-in votes are prone to fraud, although election experts say that is extremely rare in U.S. elections. Mail voting is a long-standing feature of American elections, and about one in four ballots was cast that way in 2016.

Democrats have promoted mail-in voting as a safe way to cast a ballot, while Trump and Republicans are counting on a big Election Day in-person turnout.

Twitter said on Monday it would attach a warning label to any tweets, including those from candidates, that claim an election win before either state election officials or national news outlets do so.

In a sign of how volatile the election could be, storefronts were boarded up in cities including Washington, New York and Raleigh, North Carolina.

The FBI was investigating an incident in Texas when a pro-Trump convoy of vehicles surrounded a tour bus carrying Biden campaign staff. The caravan, which Trump praised, prompted the Biden campaign to cancel at least two of its Texas events, as Democrats accused the president of encouraging supporters to engage in acts of intimidation.

Trump will wrap up his campaign in Grand Rapids, Michigan, the same place he concluded his 2016 presidential run.

Biden has finished his campaign on the offensive, traveling almost exclusively to states Trump won in 2016. He and running mate Kamala Harris spent most of Monday in Pennsylvania, a state that is vital to both presidential candidates’ hopes. On Tuesday, he will spend Election Day in Scranton, his childhood home, and Philadelphia.