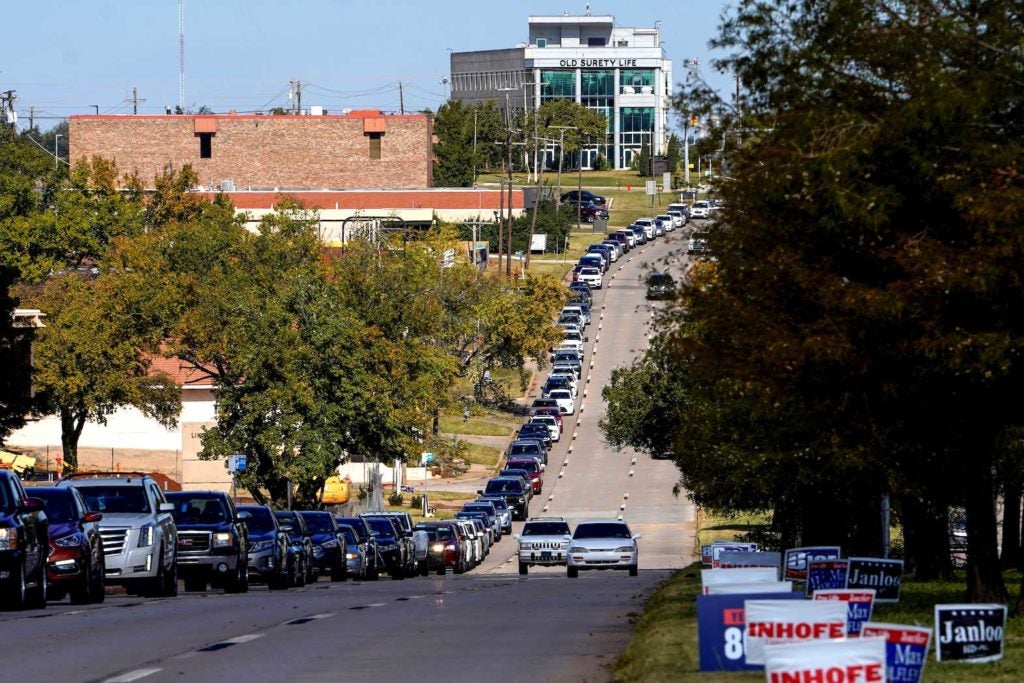 Voters wait in a long line of cars during early voting at the Oklahoma Election Board in Oklahoma City, Oklahoma, U.S. March 29, 2020. REUTERS/Nick Oxford

WASHINGTON – More than 80 million Americans have cast ballots in the U.S. presidential election, according to a tally on Thursday from the U.S. Elections Project at the University of Florida, setting the stage for the highest participation rate in over a century.

The record-breaking pace, more than 58% of total 2016 turnout, reflects intense interest in the vote, in which incumbent Donald Trump, a Republican, is up against Democratic nominee Joe Biden, a former vice president.

Huge numbers of people have voted by mail or at early in-person polling sites amid concerns the coronavirus could spread at busy Election Day voting places.

Trump trails Biden in national opinion polls as most voters say they disapprove of the Trump administration’s handling of COVID-19, which has killed more than 227,000 people in the United States, with case numbers once again breaking daily records as Election Day nears on Tuesday.

Democrats hold a significant advantage in early voting due to their embrace of mail balloting, which Republicans have historically cast in large numbers but have shunned amid repeated and unfounded attacks by Trump, who says the system is prone to widespread fraud.

Experts have predicted turnout will easily surpass the 138 million who voted in the 2016 presidential election that Trump won. Only 47 million votes came before Election Day in 2016.

In 20 states that report party registration data, 18.2 million registered Democrats have already voted, compared with 11.5 million Republicans and 8.8 million with no party affiliation. The data does not show for whom the votes were cast.