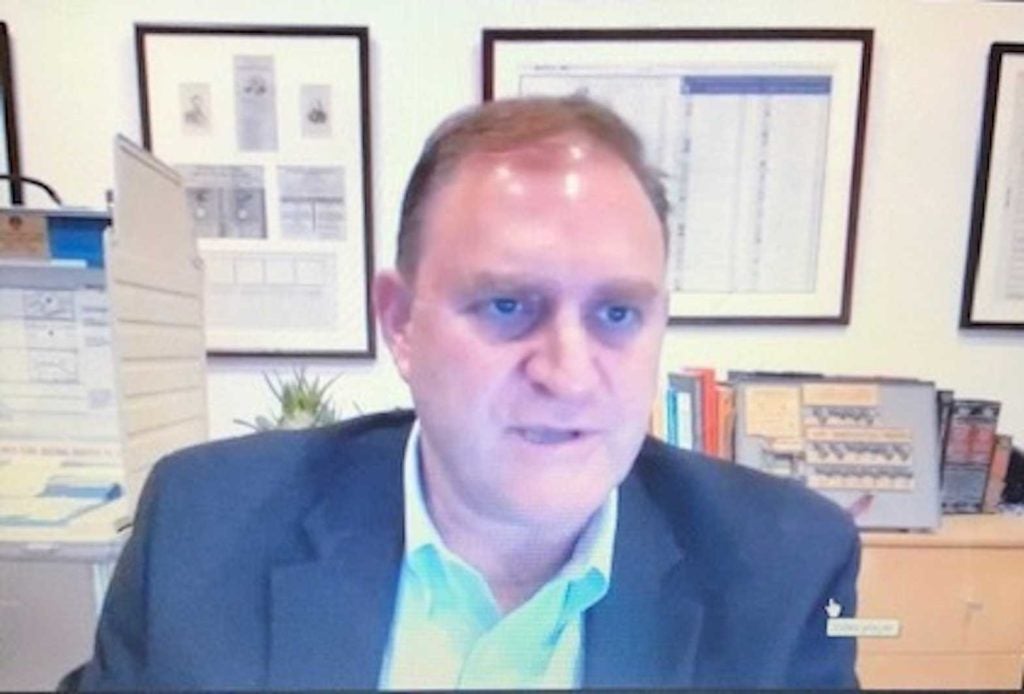 The James B. McClatchy Stanford Law School professor, however, wasn’t that sparing when he spoke Oct. 27 to reporters of color on how to cover the November 3 elections.  Persily actually delivered his message exhaustively, and with a full complement of Powerpoint slides at the third installment of Ethnic Media Services’ special briefing on the national elections.

For good reason.  Persily heads the Stanford-MIT Healthy Elections Project  formed to “ensure that the 2020 election can proceed with integrity, safety, and equal access.” Persily also is former senior research director of the Presidential Commission on Presidential Elections and is collaborating with political scientists, academics, civic organization and election administrators to “access and promote best practices.”

Armchair election analysts would recognize him from NBC and PBS coverage of major polls, and as such has notched a few “learned lessons” such as how not to end up with egg on the face, as the Peacock  Network did 20 years ago.

Make that “omelette in our face,” as then-premier news anchor Tom Brokaw admitted after NBC first declared Vice President Al Gore winner of the  hairline presidential race with Texas Gov. George W. Bush.  That was 7:50 p.m., Nov. 7, 2000 — election evening.  The count continued for days, ultimately requiring intervention by the US Supreme Court to avoid a recount in Florida, and concluded with the proclamation of Bush as the 43rd President of the United States.

That chaotic scenario could pale next to what potentially could occur before, during and after voting centers are closed next week, Persily cautioned, because these elections are “different.”

For one, the numbers are staggering.  Despite messages storming the ether about the risk of mail-in voting, 82 million people requested absentee ballots, Persily he said.  Those requests are “disproportionately from Democrats” who also have voted early in “record numbers.”

Some 160 million are expected to vote and between 60 to 75% will have voted before Nov. 3, said Persily.  Which leaves 50 to 60 million voting in person, raising a point of concern for the polling places.

Asked by Inquirer.net which country outside the United States would be the source of the most absentee ballots, Persily said he did not know but assumed it would be Canada or the nation with the most US citizens, before directing the reporter to the US Vote Foundation.

He was right about the country having the most residents who are US citizens, but he was off the mark on the home of the most absentee voters beyond US borders,  Inquirer.net learned from the Federal Voting Assistance Program.

FVAP says that of the 135,507 ballots from overseas US citizens in 2018, the country with the highest turnout was Germany.  Germany was ninth of 10 countries with the most US citizens eligible to vote at 75,142; however,13.9% actually mailed back their completed ballots.

Israel was third of the 10 countries with 183,499 eligible US voters but only 1.8% actually mailed in their ballots.

Covid-19 undoubtedly compounds the logistically-fraught current situation with a new surge in hot spots around the world including the US where over 220,000 have died.

Polling centers are larger.  Social distancing will be observed.  There will be fewer election day voters  but “everyone will be thin-skinned” at this time because of the “polarized environment” and may “react in a dramatic way.”  Concerns are rife about polling place violence and intimidation for the same reasons.

Reporters therefore are reminded to “expect problems” when discharging their duties.

Persily enumerated what could hinder smooth voting and counting besides the long lines that have already emerged in early-voting sites and drop-off centers.

For one, which has happened in the past, voting machines could break down.

Poll workers might catch the coronavirus and don’t show up for work, leaving potentially less reliable staff replacing them.

“Traditionally veteran poll workers are over age 60,” and may be more vulnerable to the virus than their younger novice colleagues, Persily cited,  adding that some jurisdictions have inadequately trained workers because of the shift to virtual training.

The “key question”  for reporters is to find out if the problems are “isolated or systemic to the locality,” he singled out an angle demanding a deeper look .

First of Persily’s list of what reporters should avoid is a common practice in principal networks and news sites.  That would be focusing on percentage of precincts reporting which, he said, may lead to misrepresentation of results because many states will have one absentee precinct.

“You could have one precinct reporting that would have ‘half of the total votes in,’ but those would be all absentee votes” or “have ‘90% of precincts reporting'” but missing absentee ballots,” which would be “misrepresentation.”

Every state locality differs on whether absentee ballots are counted in the precinct or the state level, he said.

“Don’t report decontextualized results,” he urged, because “initial results are not necessarily predictive” of the winner, particularly if the count is only 50 percent of total.

Results are always unofficial until certified, he reiterated.

On the other hand, Persily ran through a list in which he encourages reporters to analyze and enlighten  over merely reporting:

Vigilance should heighten in the next 48 hours after elections, said Persily.  This is when reporters need to prepare for how to deal with “unwarranted claims of victory” either by the candidates, their surrogates, including those riding the “onslaught of foreign and domestic disinformation.”

There could be destroyed votes (remember those hanging chads that did Gore in?) among worst-case scenarios such as “fraud and election official malfeasance” in the vote-counting process. 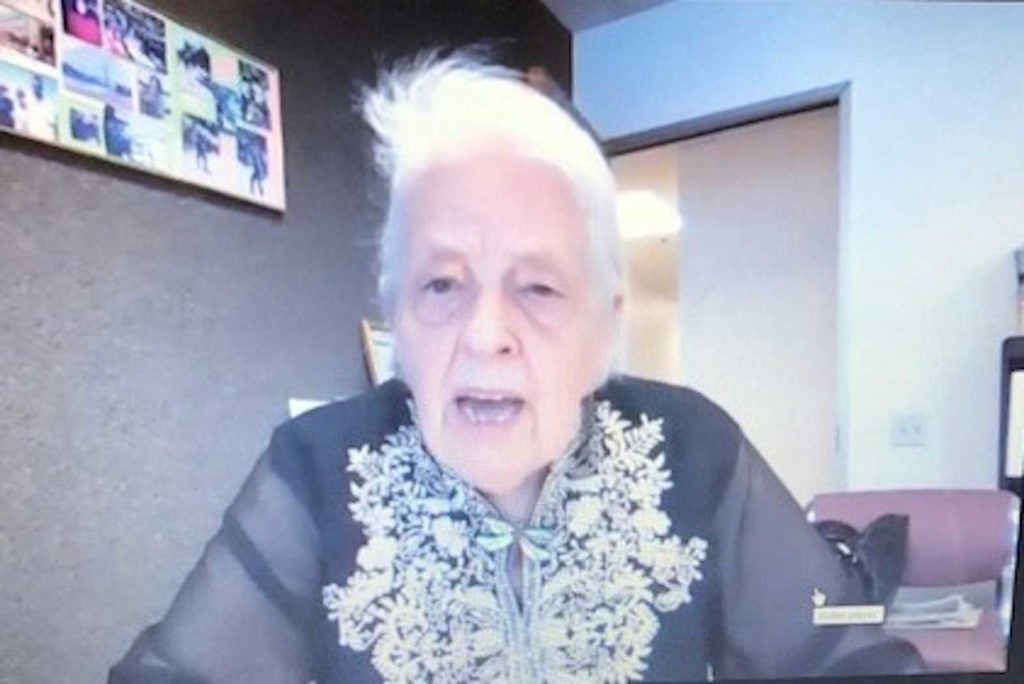 EMS director Sandy Close wants to know how to prepare for “what happens if there is no clear winner” in the Nov. 3 elections. SCREENGRAB/cmqm

“It’s important to amplify the voices of authoritative sources when it comes to the vote-counting process,” he advised.  “Manage voter expectations as to when results will be available.”

Given the tone of the campaign, Persily would not surmise what could happen in the courts after election day.

“It’s too early to tell even now and in the day after what might be the issues that would lead to litigation,” he said, “but it’s important” to hear from “responsible folks to make sure to focus on what might be points of legal contention.”

Best to be armed and prudent but absolutely certain instead of rushing to be the first to declare a winner as most media often do, was the essence of Persily’s presentation.

His big takeaway from 2016 is that the polls are much closer than people assume.  He would caution against making predictions over the likely voter pool despite the knowledge of absentee ballots tending to favor Democrats.

“This election is going to fundamentally change our infrastructure in a lot of ways,” such as the success of the mail-in ballot. Persily summed up the impact of what EMS Director Sandy Close sees as a “historic” vote.  “The principal effect is who wins” the presidential and senatorial elections, who would then “pave the way for certain types of democratic reforms that would inform the next Congress.”