Get out of the Trump hole or be buried alive

Get out of the Trump hole or be buried alive 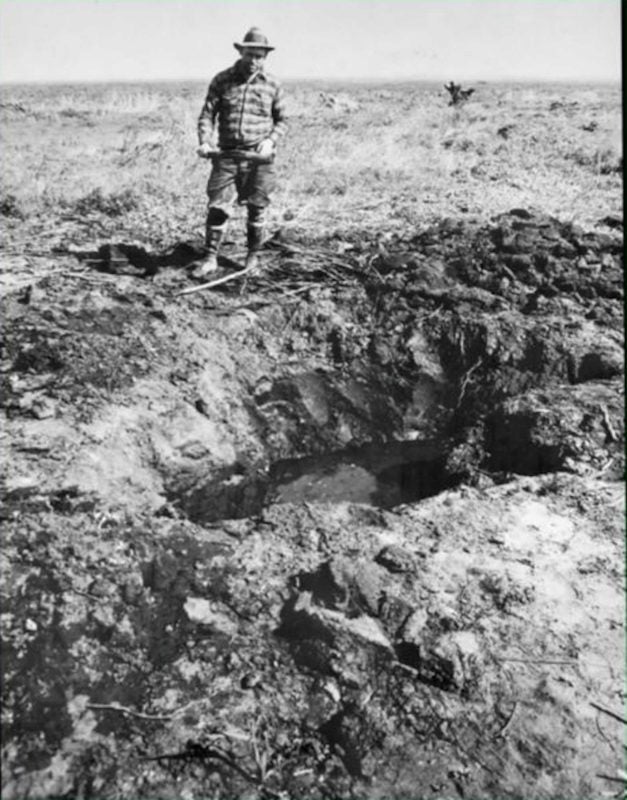 Americans are buried in a Trump hole. It’s time to get out of it.

If you haven’t voted yet, please beat the lines, and do it early. And if you’re not convinced about whom to vote for,  read this and my other columns and commit them to memory. (OK, JK about the memorization. You may use cue cards).

But first, the idea of America buried under the dysfunction of a Trump administration is an interesting metaphor that the Filipino American community should know much better.

Especially if you know the story of Cecilia “Celine” Navarro, buried alive in 1932.

Here are the facts.

According to historian Dawn Mabalon’s “Little Manila is in the Heart,” and other published reports,  members of the Caballeros de Dimas-Alang (CDA),  a Filipino fraternal Mason-like organization in Stockton, Calif., were accused of kidnapping Navarro twice. The first time,  they judged her for a crime against the group. Navarro had testified against CDA members in court about witnessing a domestic violence case in May of 1932. It was enough to send four CDA members to San Quentin.

Months later Navarro was accused of adultery by the CDA  and disappeared on Nov. 19.

It was after this second kidnapping, that one CDA member said Navarro was put on trial by the group ON NOV. 20.  She was bound and blindfolded, accused of being unfaithful to her husband, for which she pleaded guilty and was punished by being made to crawl on her knees over a floor of uncooked beans. But it was primarily for breaking the secrecy of the group that she was sentenced to be buried alive at midnight.

When a CDA member, Pablo Bustamante came forward to police, he led them to  the grave on Jersey Island in the Stockton Delta Region. They found the buried Navarro to have died not from her beatings, but from suffocation.

At the time, The Stockton Record called the whole story “Jungle Justice.”  Three men and four women, all members of the CDA were indicted for murder and pleaded not guilty.  The sensationalistic trial that followed in 1933 made headlines around the world. But in America, the reaction only fueled a raging anti-Filipino sentiment

The trial ended on July 29, 1933 with a jury voting to acquit all the accused.

Navarro’s story is the subject of a new documentary by filmmaker Celine Parrenas Shimizu who found a personal reason for taking history and bringing it forward. Shimizu’s son, Lakas, died suddenly of a common virus that attacked his heart and died in 2013.  Shimizu’s grief had her in a tail spin, until she discovered Navarro’s story, and a way out.

Through history, Navarro found her answer. Her documentary, “The Celine Archive,” is playing now at film festivals.

But the dusting off of the story it seems is making  everyone feel Filipino in 1933 again.

The close knit Filipino community in the Central Valley is aghast. Besmirched. One person asked me, “Can we sue?”

Not for the truth.

The film is not perfect. It’s an auteur’s view of Navarro’s story. In other words it’s Shimizu’s personal journey  as she talks to Navarro’s relatives, ending with some closure for her side, and perhaps a little for Shimizu.

But it’s not complete. The story is about Filipino American women of the 1930’s. It’s also about the power of our secret societies and how important they were in determining how Filipino American life worked at that time, and maybe even to this day.

There’s a lot to talk about.

As the FANHS museum director, I figured it’s a good time to co-sponsor with FANHS  a real send off to Filipino American History Month 2020.  We’re holding a free online discussion of “The Celine Archive.”  Saturday, October 31st at 1pm Pacific.

The filmmaker will be there. So will Navarro family members. As will Dr. Dorothy Cordova, the founder and executive director of FANHS.  I will be on hand to moderate.

The film, “The Celine Archive,” is more than a ghost story. It’s her story, and our story.

And there’s so much more to uncover.

America likes pills, especially a single pill that could solve all our problems. Like our presidency. That’s why we had to have one last debate. It’s the illusion we could get the whole schmear of a campaign in 90 minutes of muted real time.

And besides being the best moderated debate (the President wasn’t allowed to bully and interrupt the former Vice President Joe Biden at will), it was also the most Asian of all the presidential debates.

The word “Asian” was used twice! (That is where we find ourselves in the American political rubric. Asian Americans of Filipino descent. It’s the only time we get mentioned).

The first time, it was a direct question about people of color living near oil refineries and chemical plants in Texas, a classic environmental racism concern. People are worried about pollution killing them and making them sick. Moderator Kristen Welker asked Trump: “Your administration has rolled back regulations on these kinds of facilities. Why should these families give you another four years in office?”

Great question. But instead of concern for the families’ health, Trump led with his gut. It’s all about the money. Just like the virus. Look at his actions. Don’t wear a mask. Screw your health. Let’s keep our economy going. Good enough for Trump here.

“The families we’re talking about are employed heavily, and they’re making a lot of money, more money than they’ve ever made,” Trump said without evidence.

Of course, the families pay with their lives. But Trump didn’t seem to care. He’s the profit first guy, not the humanistic guy. And it’s the pattern behind all his solutions. He’ll throw money at it. Until the U.S. budget deficit triples to a record $3.1 trillion. That’s the problem with a billionaire businessman who games the bankruptcy laws and pays only $750 a year in taxes. He can’t relate to Americans as human beings in distress. Think of the virus response. The pattern is there.

Any mention of the health of the families living next to those polluting factories? No. But Trump did go on about money.

“If you look at the kind of numbers we’ve produced for Hispanic, for black, or Asian, it’s nine times greater the percentage gain than it was under in three years, than it was under eight years of the two of them, to put it nicely,” Trump continued, implying he was better than Biden and Obama.

I don’t know if the numbers are correct, or if he conflated the families next to those refineries in Texas with families in general, nationally. But here was Trump with a real chance to appeal to these voters in Texas, including some Asian Americans, and Trump answered in the most venal, dispassionate way.

The other “Asian” mention came in the last question posed by Welker, the imagine yourself on your Inauguration Day: “What will you say in your address to Americans who did not vote for you?”

Maybe Trump didn’t hear the question correctly. But he launched into a rap about how “the road to success will bring us together,” then boasted how under his administration, “We had the best black unemployment numbers in the history of our country, Hispanic, women, Asian, people with diplomas, no diplomas, MIT graduates, number one in the class, everyone had the best numbers.”

It was an incoherent diversity ramble. I guess he assumed everyone’s voting for him (just like an authoritarian to think that). And why? Because obviously look what he’s done for us–made us all rich? Definitely, not one percent rich. Barely middle class rich.

So he didn’t exactly answer the question. But he used the word “Asian” again.

Trump says Asian twice not related to coronavirus, and he thinks it’s a way to get the Asian American vote (5 percent of the electorate). But the president’s record, especially on Twitter, is abysmal. According to research by Stop AAPI Hate, the president’s use of “China virus” and other anti-Asian rhetoric on Twitter was retweeted 1.2 million times and “liked” 4.2 million times. Trump is the super-spreader of anti-Asian American hate.

Biden saw Welker’s final question about talking to people who didn’t vote for him as an invitation to unite the country.

That’s why Biden won the all-important last debate. He was clear, direct, and, for the most part, in command.

In those two questions where he mentioned “Asian,” the message was clear.

What are you waiting for? You have enough to vote.

After nearly four years of dysfunction we need to restore the ship. It’s no mistake that in the last few months, Joe Biden has surged ahead in the terms of donations from the richest and most highly educated zip codes in America, according to a New York Times analysis.

American governance needs a grown up that all Americans from every persuasion  can trust.

Joe Biden isn’t the radical left wing Trojan Horse that the fear monger Trump wants to warn us about.

Biden is just the person we need to get us out of our Trump hole.

Emil Guillermo is a journalist and commentator. He writes a column for the North American bureau of Inquirer.net. Twitter @emilamok  See/hear him  at www.amok.com, or on your favorite podcast app.