LOS ANGELES – Several expatriate artists from the Philippines recently joined hands in support of their passion for the art and to display their work under one roof at the in Historic Filipino Town in Los Angeles.

The artists were responding to the call of Filipino American Service Group Inc. (FASGI) Executive Director Yey Coronel to share their work with the community as well as to seed incubator projects for startup businesses and artists at FASGI’s Bayanihan Center in Historic Filipinotown.

The project is billed as “ Ugnayan sa Sining,” launched in July and continues, in collaboration with the Philippine Consulate General in LA.   Featured artists are painters, sculptors, photographer and healers with notable awards from the Philippines and in the U.S.

The FASGI Bayanihan Center is the site of the former Park View House, FASGI’s main facility from its inception in 1981. Park View House initially served as a home to Filipino American World War II veterans who needed housing, medical and other assistance for federal benefits. As the number of Filipino veterans diminished, the FASGI became a transitional home for the homeless which had to stop in 2016 due to loss of funding.

FASGI now welcomes several community programs to use its facilities to promote culture and assist small entrepreneurs to launch their craft through exhibits, cuisine demonstrations, workshops, health and related forums. 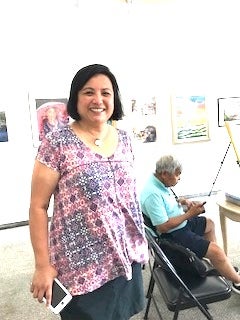 “The art community responded well,” says Coronel who was impressed with the enthusiasm of Filipino American painters who helped prepare to display a good collection within “FASGI’s walls.”

The incubator project is meant not only to enhance art and art appreciation, but also to help the artists make money out of their art. “Madalas kasi pinamimigay lang,” (Often, they just gave it away,” Yey laughed.

“We’d like to offer them a community gallery where prospective students and budding artists could visit and be inspired by their own,” Coronel added.

A group of five artists spoke to INQUIRER.net one Saturday. The most senior of the five, Magoo Valencia (soon to be 80 this year), couldn’t even recall the details of his immigration to LA In 2004. “Pinapakain lang ako dito ng mother in law ko,” (I was just being fed here by my mother-in-law) he laughed.

Valencia was an art director in the Philippines with a fine arts degree from the University of the Philippines. He was a contemporary of the famous Malang Santos, who died last June at the age of 89.

He said his life took a significant turn when he met fellow painter Rafael Maniago who invited him to apply for a job at Disneyland where Maniago works as an artist. Valencia did and was hired as a caricaturist and still works there.

Maniago has hosted workshops, meetings and art sessions at his studio in Bellflower. At his place, the group paints, critique each other’s works and share any and all news about the homeland and the latest in art development.

The granddaughter of famous Filipino socialist leader Luis Taruc who headed a guerrilla army against the Japanese occupation of the Philippines during World War II, Tiinz Taruc got to know the members of the group through Facebook.

The only child of Luis’ son Romeo, Tiinz worked as an analyst at the LA unified School District while pursuing her art. She is fairly well known and has received numerous awards for her koi fish, mother and child and abstract paintings. She is now writing a book about her grandfather.

Cesar De Vera, who works as a web designer for the Press Telegraph, describes himself as a traditional fine artist. Like the others, his main desire in associating with the “masters” is to leave a legacy. He said his younger generation of artists in the ‘80s did not benefit from the tutelage of the older artists. “Our professors then would just let us paint and then critique our work.” 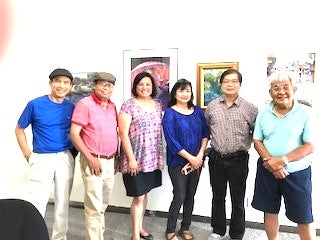 Valencia said that by comparison his professors at UP were nurturing. They included the internationally famous Bencab (Ben Cabrera) who was named a National Artist of the Philippines in Visual Arts Painting in 2016, Cesar Legaspi and Vicente Manansala. “They gave us pointers on the nuances of their works–itinuro nila ang kanilang techniques.”

Vics Magsaysay, specializes in mixed media and photography. His passion transcends the visual arts as he engages in alternative healing and holds a doctorate in clinical hypnotherapy.

Yey Coronel credits Vics with having brought to FASGI the idea of hosting the artists and devoting a portion of the FASGI building to a gallery and incubator of Filipino American enterprises.

Vics believes in the synchronicity of events and that finding the 16 artists under one roof at FASGI is a testament to this phenomenon.