Trump refuses to say just how sick he is

Trump refuses to say just how sick he is 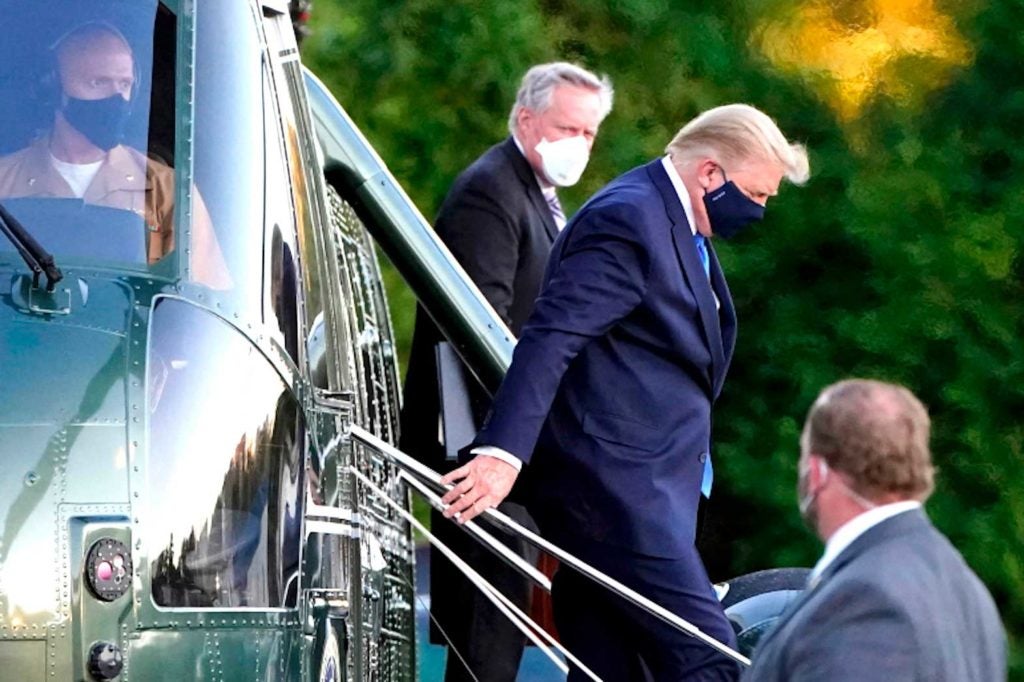 President Donald Trump on his way to Walter Reed Hospital after testing positive for coronavirus. AP

The only conclusion to draw after this past weekend is Donald Trump is the same “in sickness and in health.” Secretive. Duplicitous. Obstructionist.

Whether it involves his personal tax returns, his scandalous relationships with women not his wife,  his various potentially unethical business dealings while president, or the business enterprises he’s been sued for as a private person (Trump University), his college grades, his draft record, or anything else, Donald Trump remains Mr. None of Your Business.

But as president, it’s all of our business.

Especially to Filipinos and  Asian Americans who’ve been subjected to his xenophobic characterization of the virus that has brought on thousands of racist attacks on our community.

With a month to go before the election, Trump’s health is of utmost importance to all of us.  And yet the president has been anything but forthcoming during his bout with Covid-19.

After the nation was first alerted of his positive test on Thursday night, we know Trump was sick enough with a fever and other symptoms to be helicoptered into Walter Reed Medical Center on Friday night.

We know he had at least two drops in oxygen levels that made his doctors feel emergency use of an experimental, unapproved monoclonal antibody drug was needed. (The drug was tested on animals (hamsters) and its value to humans may be even more limited than at first thought).

Trump’s also has been given remdesivir and another drug, dexamethasone, a steroid used for seriously ill patients with Covid.

We got that much because Trump’s doctors finally admitted to some specifics after a Saturday press conference that showed the White House doctor, Dr. Sean Conley, evasive and spinning a Trump-made tale. It was so bad, Trump’s chief of staff released, first on background then on the record, that the president’s condition was more serious than appeared, with no clear path to recovery.

When you’re president, you really can’t just tell us what you want us to hear. We need regular updates especially with Trump, a 74-year-old, weighing 244 pounds, in high risk groups due to age and weight.

We don’t even know how this respiratory illness is impacting the president’s lungs. We do know what his lack of Covid policies have done to the country. But what has Covid done to him?

Instead of honesty, we get videos. The one on Saturday showed a haggard and fatigued Trump. The shorter video on Sunday has Trump telling us he has learned a lot about Covid.

Deathbed conversion? He showed what he thinks about precaution when he went out  for a quick drive-by to wave to the Trump “patriots” gathered outside the hospital.

Is that called photo-op Therapy? So Trump’s a changed man having been a Covid patient? I don’t buy it.

And now even though it could take ten days to see how the virus develops, his camp is talking about a possible Monday release.

Trump should be resting, trying to get better, not playing manipulative games for political advantage.

We all want him to get well. That’s the truth. Voters need the truth too.  A second term is already considered  a lame duck term. At the helm shouldn’t be an actual lame duck.

Maybe we had all we needed after first debate

You’re supposed to leave a debate feeling some admiration for a candidate, to the point you want to vote for that candidate, not punch him in the nose.

But more people were surely thinking the latter after the first U.S. presidential debate last week––including Trump supporters wishing he would shut up.

President Trump just wouldn’t play fair by the agreed rules of the debate.

By comparison, Biden appeared to be the calmer, saner, more presidential candidate to emerge from the first debate, a chaotic embarrassment of a presidential debate.

And it was mostly because Trump couldn’t help himself. His behavior was like the tantrum of a tyrant or a three-year-old.

Maybe he was just trying to fluster the man he’s repeatedly called “Sleepy Joe.” Biden was anything but. Biden stood tall and smiled when Trump went on yet another rant. Out of frustration, Biden, when he was interrupted, at one point told Trump, “Can you just shush for a minute?”

Biden was mostly smiling, trying to show how a leader of the free world behaves. But occasionally he did attack Trump, perhaps out of self-defense, referring to the president as a “clown,” a “racist,” or “the worst president ever.”

The president deserved it with his disgraceful performance.

Where was the moderator Fox’s Chris Wallace? Not in control. I’ve moderated a statewide gubernatorial debate, some senate races, and a few local ones in my time. A moderator has to let the action happen, but it was nearly an hour in when Wallace finally stepped up, leading to this exchange with Trump:

Wallace: “The country would be better served if we allow both people to speak with fewer interruptions, I’m appealing to you sir to do that.”

Trump: But he does plenty.

Wallace: But less than you have.

Wallace didn’t have control over the tone of the debate. But he did decide the questions, and I thought Asian Americans would be interested in the section on race relations.

We weren’t mentioned by name, and there was no mention of immigration. For example, a late-breaking story before the debate said that ICE raids would be starting in sanctuary cities as early as this week around the nation. Too late to come up in this debate.

So the only real substantive takeaway for us and all people of color in the “race section” came when Wallace asked Trump: “Are you willing tonight to condemn white supremacists and militia groups and that they need to stand down and not add to the violence in a number of these cities as we saw in Kenosha and as we’ve seen in Portland?”

Trump couldn’t do it.

He hemmed and hawed. But when given a direct opportunity, he could not condemn white supremacy.

In fact, Trump responded in a way that empowered a racist group, as he gave the “Proud Boys” a shout out. ”Stand back and stand by. But I’ll tell you what somebody’s got to do something about Antifa and the left, because this is not a right wing, this is a left wing problem. ”

When Trump had his chance to take a stand on racial justice, he just couldn’t do it.

Even in the most anticipated subject areas, like Trump’s mishandling of the coronavirus, Trump kept harping on his therapeutic Chinese travel ban, which was full of loopholes and did not stop travel from China.

As for the more than 200,000 deaths of Americans? Trump had no real answer and showed no empathy

The New York Times story on Trump’s decades of tax avoidance came up, and Trump answered it like it was federal taxes. He avoided it. Then again, Biden couldn’t capitalize on it.

At every turn, Biden attempted to bring the focus back to real people and families watching at home. Overall, that was his strategy on most of the issues from the economy to affordable health care. But frankly, the president’s disruptions tended to overshadow the substance and kept the debate from being coherent at all.

When the president needed to heat up the rhetoric, he’d turn to the old Burisma/Hunter Biden accusations that were discredited during the impeachment hearing. It only got Biden fired up to speak on defense of his family.

By the end, Wallace did show a little more control but it was too late. It was easy to expose Trump, a climate denier, on climate change. Just let him talk and lie in real time.

And on voter fraud, the difference was clear. Wallace asked them both if they would pledge to urge supporters not to engage in civil unrest, and “not to declare victory until the election has been independently certified.”

Biden told people to vote, and that he’d abide by a certified count. But Trump offered no such pledge and said if he saw “tens of thousands of ballots being manipulated,” he couldn’t go along with that. “These people aren’t equipped to handle [the election],” Trump said. “And they cheat.”

It means a final vote could take months as Trump made it clear he’s prepared to fight any result he doesn’t like.

Going into the debate, Biden was anywhere from 7 to 10 percentage points up in many key national polls, an advantage that would make the former vice president an electoral college lock.

After this first debate, if the margins in polls rise to advantage Biden, it would be a troubling sign for Trump and for us.

Could this be why the Trump illness is somewhat intriguing.

He’s already hinted at legal challenges to a “rigged” election. After reviewing his debate performance, will he now move aggressively towards more autocratic ways to preserve his hold on the presidency? When Trump doesn’t commit to a peaceful transfer of power, what else are we to think—that he was just kidding?

The side-by-side comparison was all too clear. There’s no debate. And maybe no need for any more. The bullying Trump showed he’s unfit to lead, by policy or health.

Emil Guillermo is a journalist and commentator. He writes a column for the Inquirer.net’s North American bureau. Twitter @emilamok Listen to his podcasts at www.amok.com