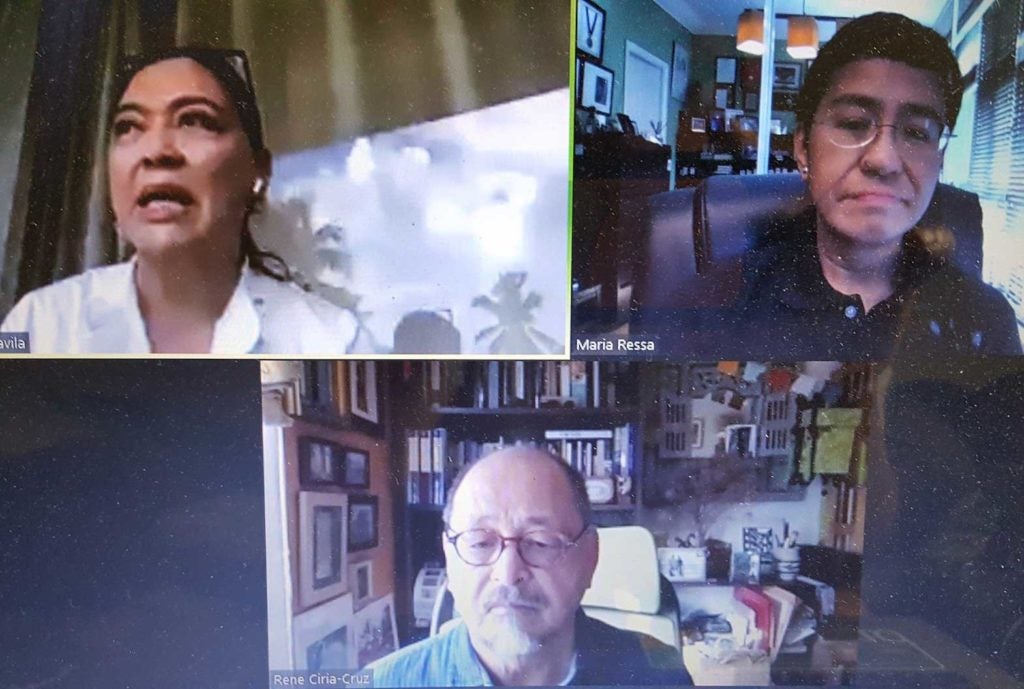 ABS-CBN broadcaster, TV and radio program host Karen Davila (top left) maintains that the closure of her company deprives Filipinos, especially in far-flung areas, access to information and independent views. Rappler founder and Chief Executive Officer Maria Ressa (top right) believes that efforts to undermine the free press are a global issue. The webinar on the state of press freedom in the Philippines was presented by Akbayan North America and moderated by Inquirer.net US Bureau Chief Rene Ciria-Cruz.

SAN FRANCISCO — Two of the of the Philippines’ top journalists warned that attacks by the government and the manipulation of social media pose a grave threat to press freedom in the Philippines and to post-Marcos democracy itself.

The two journalists spoke in a recent online forum, “Media Persecution in the Philippines: Democracy at a Crossroads,” hosted by Akbayan North America and moderated by U.S. Bureau Chief Inquirer.net Rene Ciria-Cruz.

The embattled Ressa was already served 8 arrest warrants from 11 cases leveled against her and Rappler, and has put out an estimated $80,000 in bail. She and a former Rappler colleague were also convicted in June of cyber libel. At one point, she was getting nearly a hundred hate messages an hour, she reported.

Ressa charged that the leadership style of President Duterte is to “induce fear, to make people, journalists and owners of media companies afraid: “This environment of violence and fear has enabled the government to corrupt, coerce and co-opt.”

“A lie told a million times becomes the truth especially laced with anger and hate,” Ressa contends. “A hundred percent of Filipinos on the internet are on Facebook which is the Filipinos’ internet as compared to only 69% Americans in the U.S.”

Davila is convinced, like Ressa, that the shutdown of ABS-CBN is an issue of press freedom because it deprived millions of Filipinos, especially those in the far-flung areas, access to independent information and viewpoints. The shutdown closed 21 local ABS-CBN stations and 12 of 14 TV Patrol local newscasts.

“The closure sends a chilling effect. The government can give reasons that may sound legal and justifiable, but in the end the message is that they can do what they want,” Davila complained.

Davila brushed aside the focus the House of Representatives technical working group on the alleged violations of ABS-CBN on PDRs (Philippine deposit receipts), tax avoidance, abuse on election coverage, etc. She believes that cases may be filed against the company and its owners for the alleged violations, but news media as institutions should be protected from being muzzled by those corporate issues.

“You can accuse CNN of being biased, Fox News as biased, NBC news as biased, but in a democracy, that’s not supposed to be a reason for shutting them down. That’s why those networks are still around.”

Ressa concurred: “In a democracy, you have to protect freedom of choice, freedom of expression, of publication, to broadcast. You need to protect the voice that goes against your own.  The purpose of media is to watch over those governed and not protect the governor.”

“You are called anti-government when you take officials to account,” said Davila, “but journalists are neither transcribers, typists nor stenographers. These are not the jobs of journalists, who should put things in context and ask the hard questions. The absence of journalism, good, legitimate, hard-hitting, investigative, once gone in a society will allow leaders to commit more abuse, corruption.”

Ressa stressed that press freedom is important because “if you don’t have information, you cannot hold the government to account. And we have a government that is very good at shaping the narrative with the help of social media,”

Professional journalists used to be the gatekeepers who sift verifiable information from misinformation and lies. That power has now gone to the tech platforms who, have essentially taken the money and abdicated responsibility, allowing disinformation troll farms and fake news to proliferate, according to Ressa.

“The platforms are being used to tear down our credibility and to intimidate us. At the same time, all the advertising is going to these platforms themselves, which are killing the business model of news.”

With social media’s instantaneous and powerful reach, both Ressa and Davila acknowledge that the fate of press freedom is a global issue.

Ressa claims that social media platforms — Facebook, YouTube, Twitter – are now, to varying degrees, behavior modification systems that make users “Pavlov’s dogs” whose social media posts are turned into processed data that are sold to the highest bidder, whether it is a government or a corporation.

“The end goal is to change the way you think and the way you act. If fact is debatable, you cannot have truth. If you don’t have truth, you can’t have trust. Without any of these three–facts, truth, and trust–how can you have democracy?” wondered Ressa.”