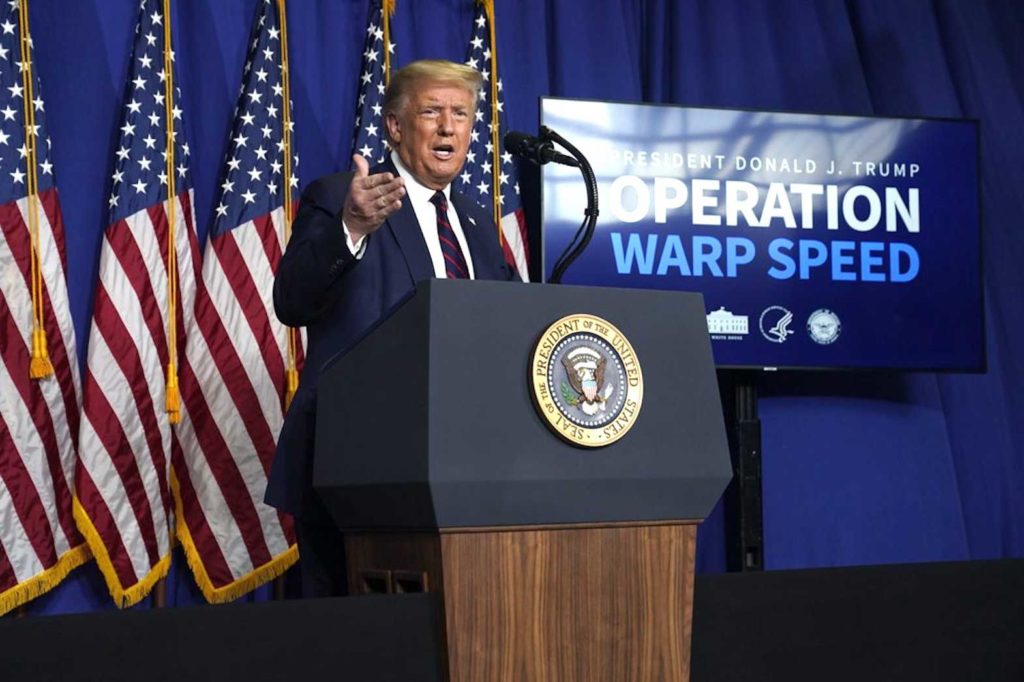 President Donald Trump, who seems intent on announcing a Covid-19 vaccine before Election Day, could legally authorize a vaccine over the objections of experts, officials at the Food and Drug Administrationand even vaccine manufacturers, who have pledged not to release any vaccine unless it’s proved safe and effective.

In podcasts, public forums, social media and medical journals, a growing number of prominent health leaders say they fear that Trump — who has repeatedly signaled his desire for the swift approval of a vaccine and his displeasure with perceived delays at the FDA — will take matters into his own hands, running roughshod over the usual regulatory process.

It would reflect another attempt by a norm-breaking administration, poised to ram through a Supreme Court nominee opposed to existing abortion rights and the Affordable Care Act, to inject politics into sensitive public health decisions. Trump has repeatedly contradicted the advice of senior scientists on Covid-19 while pushing controversial treatments for the disease.

If the executive branch were to overrule the FDA’s scientific judgment, a vaccine of limited efficacy and, worse, unknown side effects could be rushed to market.

The worries intensified over the weekend, after Alex Azar, the administration’s secretary of Health and Human Services, asserted his agency’s rule-making authority over the FDA. HHS spokesperson Caitlin Oakley said Azar’s decision had no bearing on the vaccine approval process.

Vaccines are typically approved by the FDA. Alternatively, Azar — who reports directly to Trump — can issue an emergency use authorization, even before any vaccines have been shown to be safe and effective in late-stage clinical trials.

“Yes, this scenario is certainly possible legally and politically,” said Dr. Jerry Avorn, a professor of medicine at Harvard Medical School, who outlined such an event in the New England Journal of Medicine. He said it “seems frighteningly more plausible each day.”

Vaccine experts and public health officials are particularly vexed by the possibility because it could ruin the fragile public confidence in a Covid -19 vaccine. It might put scientific authorities in the position of urging people not to be vaccinated after years of coaxing hesitant parents to ignore baseless fears.

Physicians might refuse to administer a vaccine approved with inadequate data, said Dr. Preeti Malani, chief health officer and professor of medicine at the University of Michigan in Ann Arbor, in a recent webinar. “You could have a safe, effective vaccine that no one wants to take.” A recent KFF poll found that 54% of Americans would not submit to a Covid -19 vaccine authorized before Election Day.

After this story was published, an HHS official said that Azar “will defer completely to the FDA” as the agency weighs whether to approve a vaccine produced through the government’s Operation Warp Speed effort.

“The idea the Secretary would approve or authorize a vaccine over the FDA’s objections is preposterous and betrays ignorance of the transparent process that we’re following for the development of the OWS vaccines,” HHS chief of staff Brian Harrison wrote in an email.

White House spokesperson Judd Deere dismissed the scientists’ concerns, saying Trump cared only about the public’s safety and health. “This false narrative that the media and Democrats have created that politics is influencing approvals is not only false but is a danger to the American public,” he said.

Many scientists doubt a vaccine could meet those criteria before the election. But the terms might be legally vague enough to allow the administration to take such steps.

Trump, however, has insisted repeatedly that a vaccine to fight the pandemic that has claimed 200,000 American lives will be distributed starting next month. He reiterated that claim Saturday at a campaign rally in Fayetteville, N.C.

The vaccine will be ready “in a matter of weeks,” he said. “We will end the pandemic from China.”

Although pharmaceutical companies have launched three clinical trials in the United States, no one can say with certainty when those trials will have enough data to determine whether the vaccines are safe and effective.

Scientists have warned for months that the Trump administration could try to win the election with an “October surprise,” authorizing a vaccine that hasn’t been fully tested. “I don’t think people are crazy to be thinking about all of this,” said William Schultz, a partner in a Washington, D.C., law firm who served as a former FDA commissioner for policy and as general counsel for HHS.

“You’ve got a president saying you’ll have an approval in October. Everybody’s wondering how that could happen.”

In an opinion piece published in The Wall Street Journal, conservative former FDA commissioners Scott Gottlieb and Mark McClellan argued that presidential intrusion was unlikely because the FDA’s “thorough and transparent process doesn’t lend itself to meddling. Any deviation would quickly be apparent.”

But the administration has demonstrated a willingness to bend the agency to its will. The FDA has been criticized for issuing emergency authorizations for two Covid -19 treatments that were boosted by the president but lacked strong evidence to support them: hydroxychloroquine and convalescent plasma.

Azar has sidelined the FDA in other ways, such as by blocking the agency from regulating lab-developed tests, including tests for the novel coronavirus.

Although FDA Commissioner Stephen Hahn told the Financial Timeshe would be willing to approve emergency use of a vaccine before large-scale studies conclude, agency officials also have pledged to ensure the safety of any Covid -19 vaccines.

A senior FDA official who oversees vaccine approvals, Dr. Peter Marks,has said he will quit if his agency rubber-stamps an unproven Covid-19 vaccine.

“I think there would be an outcry from the public health community second to none, which is my worst nightmare — my worst nightmare — because we will so confuse the public,” said Dr. Michael Osterholm, director of the Center for Infectious Disease Research and Policy at the University of Minnesota, in his weekly podcast.

In the New England Journal editorial, Avorn and co-author Dr. Aaron Kesselheim wondered whether Trump might invoke the 1950 Defense Production Act to force reluctant drug companies to manufacture their vaccines.

But Trump would have to sue a company to enforce the Defense Production Act, and the company would have a strong case in refusing, said Lawrence Gostin, director of Georgetown’s O’Neill Institute for National and Global Health Law.

Also, he noted that Trump could not invoke the Defense Production Act unless a vaccine were “scientifically justified and approved by the FDA.”