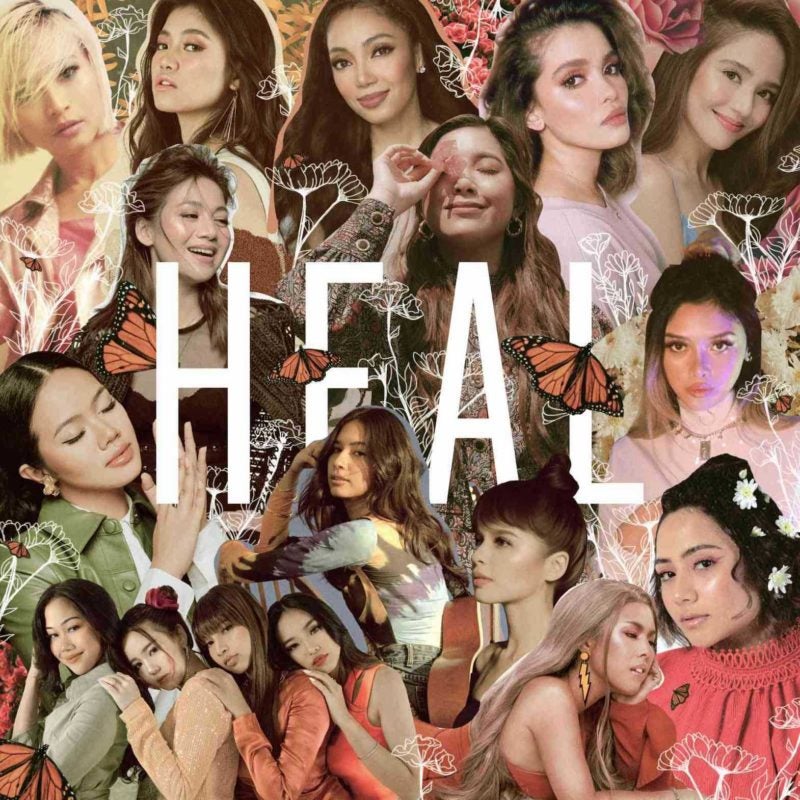 This is the first Southeast Asian collaboration of its kind. “I feel very privileged and honored to be a part of this collaboration,” Singapore’s Haneri says.

Songwriter/artist Xela says that she wrote the song to describe getting through the world’s present harsh realities. She also hopes that “this song touches your hearts and gives you moments of peace and allows you to breathe a little and feel empowered by hope.”

KZ Tandingan says that Heal “represents unity of people and artists despite the situation we are all in. It promotes love, understanding and healing.”

“Being able to work with other Southeast Asian artists to spread positivity through music makes this a very heartwarming project that I really wanted to participate in and represent Singapore for,” says Haven, the youngest among the artists.

The collaboration is also a #StreamToDonate project, with all artists donating their share of fees and royalties to ABS-CBN’s “Pantawid ng Pag-ibig” (Bridge of Love) fund-raising program which aims to provide relief to Filipinos who have lost their sources of livelihood due to the COVID-19 pandemic.

ABS-CBN Music International aims to introduce “the brilliance of Filipinos to global audiences and to bring in international talents and music to the Philippines.”

About the All-Female Artists of Heal

Jayda is setting her mark in the Philippine music industry when she nabbed ‘Best Performance by a New Female Recording Artist’ in 2019 from the Awit Awards, the biggest award giving body for music in the Asian country.

Jona started her career when she became the first grand winner singing competition Pinoy Pop Superstar. She has performed several official soundtracks to different TV shows and movies and has won awards from several award giving bodies in the Philippines.

Kyla is known as the Philippines’ “Queen of R&B.”  Her work has earned numerous awards from local and international award giving bodies. She is also honored by the Philippines Society of Composers, Singers, and Publishers as one of the first pioneers of R&B music in the country.

KZ Tandingan is an award-winning soul and urban singer-songwriter-rapper who was the champion of the first season of The X Factor Philippines in 2012. She joined the Chinese Television competition Singer 2018, where she competed against some of the world’s best singers.

Lesha is an electropop artist, singer, songwriter, and producer based in Manila.

She composes, arranges, and produces all her original songs and has collaborated with multiple international music producers from the U.S., U.K., Germany, India, Nepal, and Africa.

Moira Dela Torre is one of the most popular and in-demand artists who is dominating her generation’s music scene. This singer-songwriter has over 400 million streams on Spotify alone.

R&B singer Rinni Wulandari won Indonesian Idol 2007, the youngest participant to ever win at the time. She was only 17 years old. In 2014, she transformed from being a pop singer to performing R&B songs.

Yura Yunita is a singer-songwriter who won in Anugerah Musik Indonesia two years in a row. She was Best Pop Female Singer and Best Pop Songwriter in 2017, and Best Female Solo Singer in 2018. In Global Asia 2019, Yura is one of Indonesia’s 99

DOLLA is a girl group from Kuala Lumpur formed in 2019. DOLLA is made of Sabronzo, Tabby, Syasya, and Angel. The girls’ ability to sing, dance, and perform caught the eye of Universal Music Malaysia and they signed to the label in September 2019.

Shalma Eliana is a pop singer who has performed at several live events, including Sunway City’s 2019 New Year’s Celebration and KLCC’s 2020 New Year’s Countdown. She is also a beauty and lifestyle influencer, and has worked with brands like Samsung, Sunsilk, Sephora, and Nestle.

Haneri entered the scene in 2017 with her single “Burning Up.” The Australian/Singaporean singer-songwriter has worked with artists such as Charlie Puth, Kehlani, Josh Groban, Amber and Luna from f(x) (South Korea) and MacKenzie Bourg (American Idol), to name a few.

16-year old Haven is a multi-lingual performer, singer-songwriter, and actress from Singapore.

Valentina Ploy is a Thai-Italian female singer-songwriter and is the newest face of What the Duck Music label, based in Bangkok. She started her music journey at the age of seven, writing songs in her own diary and playing violin and guitar.