Filipinos in US, Canada give mixed reviews to new balikbayan box rules

Filipinos in US, Canada give mixed reviews to new balikbayan box rules 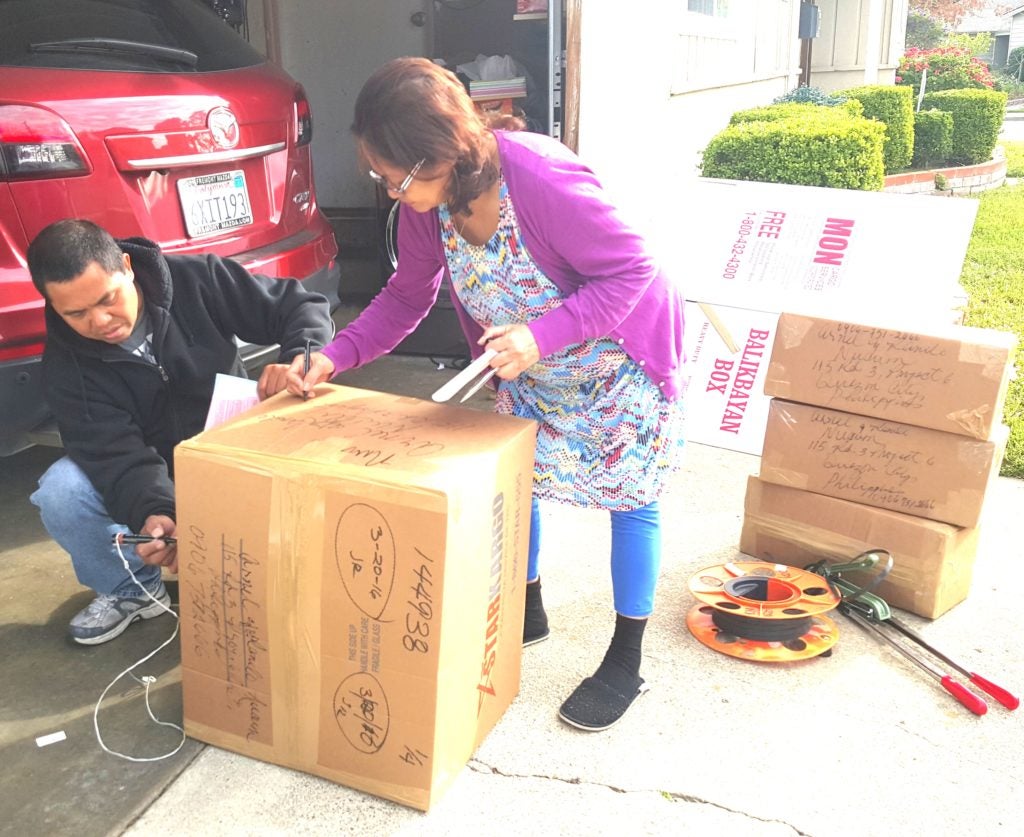 An immigrant’s mother in San Francisco Bay Area fills out the shipment invoice for the boxes she is sending to her loved ones in the Philippines. INQUIRER/Jun Nucum

FREMONT, California – Already embroiled in accusations of corruption, the Philippines’ Bureau of Customs (BOC) has courted controversy over its new rules on the shipment of duty-free balikbayan cargo boxes sent by overseas Filipino workers (OFWs) as gifts to their loved ones.

Filipinos in the United States are among the overseas Filipinos giving the new Customs rules mixed reviews.

In the new rules, the BOC is requiring cargo-forwarding companies to submit a list of items and the estimated cost of each in every balikbayan box sent by OFWs in accordance with the bureau’s Guidelines on the Implementation of Customs Administrative Order No. 05-2016 on the Consolidated Shipment of Duty and Tax-Free Balikbayan Boxes.

Also required for the shipment of the duty/tax-free boxes are a copy of the passport of the sender and receipts for new items exceeding in P10,000 in cost.

Senders willing to pay duties and taxes for the goods being shipped need not fill an information sheet. They do not need to send copies of their passports if they are not availing of tax exemption privilege given Filipino citizens if total cost of items contained in the box does not exceed P150,000.

Customs Commissioner Nicanor Faeldon explained that the declaration of goods is for the “protection” of the sender, to ensure that the items in the parcel get delivered completely to the intended receivers, that passport copies are needed to ensure that only Filipinos avail of the tax exemption privilege, and that receipts are needed only for each brand new items that are P10,000 or more in value. 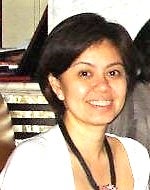 Senate Pro Tempore Ralph Recto wants the congressional customs and tariff oversight committee convened to determine if the new rules are excessive, even as he feared that these rules might result in a new form of red tape and the tampering of boxes and/or list of items.

While Recto said he recognized the right of the BOC to impose regulations to prevent smugglers from abusing duty-free balikbayan privileges, such rules should not unduly inconvenience OFWs.

Yelly Gil-Aquino, a car rental rates coordinator in Florida, who has sent two to three boxes every year since 2000 fully agrees with Recto. In addition, she thinks that the new rules will create more problems to OFWs, “making the boxes more prone to unscrupulous handlers to take whatever they like inside the boxes if they open it.”

“Make the laws simple and friendly to both sides. Don’t you think that those boxes (were) already screened from more the high-tech countries they came from?” Gil-Aquino says.

“Have you (Customs) lost your minds that you would ask for receipts? Those items were not bought all at the same time. They were kept to fill the box before they are sent. Can you not prioritize more important things to do in the Philippines than making it hard for OFWs who send the all-important remittances to the country? Is this how you repay OFWs for all their sacrifices? Please think twice before you act. If anything is lost in the boxes, will you answer for them? Will you be able to pay or return them? We worked hard for the things we send to make our families happy,” Gil-Aquino gripes.

Filipina physician’s assistant Dindi Peleo of Toronto, Canada, who has sent a box or two a year of used clothing shoes, books, bags and kitchenware to her mother’s church outreach programs for poor Baguio City barangays, does an inventory of all things she sends on the form the courier gives.

“I don’t think there should be a tax if it is for my charitable purpose and for gifting. But I definitely am for taxing for business purposes. The only way progress is possible is if we all pay our dues and be honest citizens. Abusing balikbayan boxes should never be tolerated,” Peleo stresses.

Banker Maria Emelyn Quisao-Umali, also of Toronto, Canada, has been sending at most two boxes a year for a decade, taking her two to six months to fill them.

“Since we are both naturalized Americans and therefore not entitled to tax exemptions, where will the extra payments go? Will it serve as tariff or will the extra fee go to the owner of the forwarding company?” wonders Jorge. 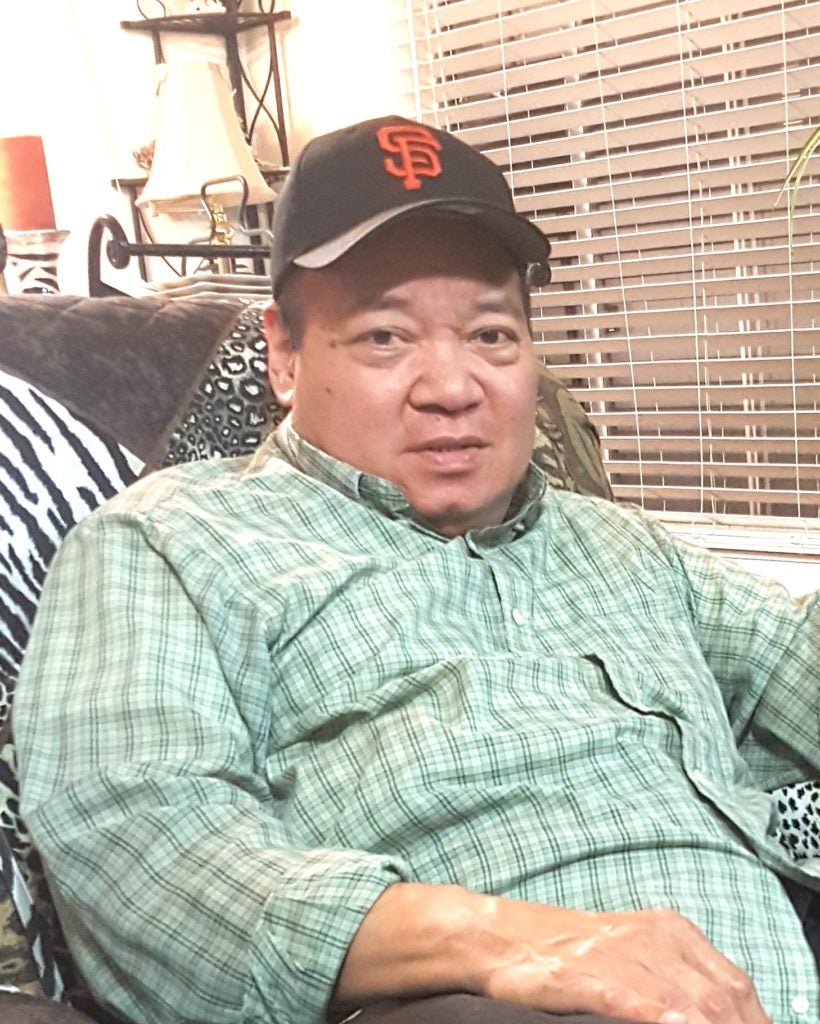 Jorge Reynoso of Fremont thinks that an additional charge of up to $10 per box sent to the Philippines is reasonable for naturalized Americans like him, especially for additional Customs work due to new forwarding requirements. INQUIRER/Jun Nucum

Flevie approves the list of items required “for us to really know what we are sending and also for the receiver to know what he/she is supposed to receive.”

“The new rule on itemized declaration will help against smuggling of contrabands if the sender will be truthful in declaring items in the box,” stresses Flevie.

“We will comply with the additional requirements in the new rules. What is important, we make our families and friends in the Philippines happy with what we send – clothes even used ones, food — the mere fact that we remember them is important for them.”

Even as this issue is being sorted out, OFWs all over will definitely keep on sending gifts and support to their loved ones in the Philippines. They only hope that the new rules won’t make it harder for them but easier for balikbayan box thieves.