Snakes in the Garden

Snakes in the Garden 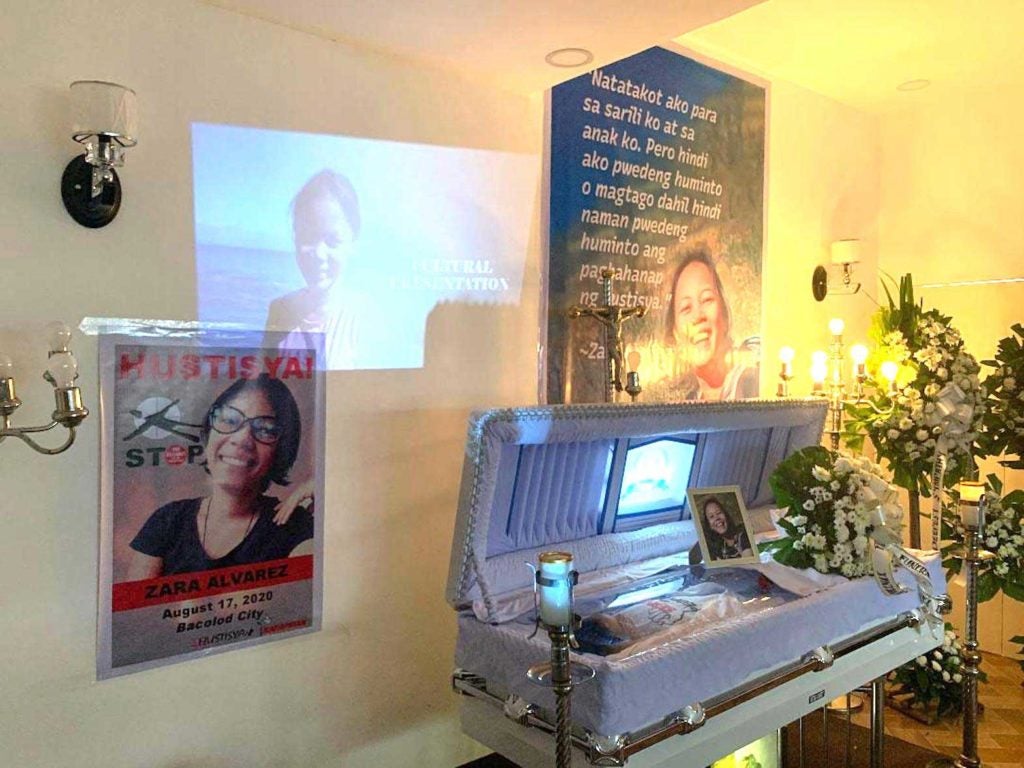 NEW YORK—Zara Alvarez, a 39-year-old human rights worker, single mother, and former political prisoner, was shot and killed the evening of August 17 in Bacolod City, the capital of Negros Occidental. That she was slain in such a fashion was not completely unexpected: having a reputation of being a fearless advocate for the rights of the most oppressed, she had been receiving death threats since the beginning of 2019. Zara was most recently a research and advocacy officer for the Negros Island Health Integrated Program and a paralegal for the local chapter of KARAPATAN, the rights organization.

The National Union of People’s Lawyers’ chapter of the neighboring island of Panay had this to say about the slain activist: “We worked with Zara on numerous cases involving summary killings, illegal arrests, and other human rights violations perpetrated by the police, the military, and para-military forces across Negros Island. From Canlaon to Manjuyod, Sta. Catalina, Sagay, Escalante, Kabankalan, and Bacolod—wherever farmers, peasant leaders, and rights advocates were imprisoned or killed—Zara was there to help the victims and their families get through the hardships brought by state-sponsored terror. Her presence was a constant force in the struggle for justice—a beacon of light in a place that, for the past two years, has been shrouded by impunity. It has been our honor to have known Zara and stood beside her in that struggle.”

She is the 13th human rights worker murdered under the Duterte regime,

barely a week after another assassination, that of peasant leader, “Ka Randy” Echanis.

Zara’s name was one of 600 listed in Memorandum Order 32, issued by the Duterte regime in November 22, 2018—names of persons alleged to be Communists, a deadly practice known as “red baiting.” Since then, more than 100 individuals—farm workers, labor leaders, lawyers, progressive teachers, students, and activists—have been murdered in Negros Island alone.

Her assassination came four days before the 37th anniversary of Ninoy Aquino’s assassination on August 21, 1983, killed with a shot to the head as he was being escorted off a China Airlines flight from Taipei. Living with his family in exile in a suburb of Boston for three years, the former senator and political prisoner had decided to return home to try and persuade an ailing Ferdinand Marcos to yield power peacefully that he had held for two decades, along with his wife and partner in crime, Imelda R. Marcos. While the soldiers who escorted him were found guilty of the foul deed, most observers believe, credibly, that the killing could only have been ordered by higher ups—way up—who have never been brought to justice.

Ninoy’s most famous declaration, “The Filipino is worth dying for,” seemed to foretell his own death, and so many principled courageous citizens like Zara Alvarez have implicitly embraced Aquino’s credo. Make no mistake: the Duterte government has exhibited nothing but brutal  and murderous contempt for constitutionally guaranteed rights. Even peaceful acts of protest and organizing on behalf of those with little to no power put one’s life on the line, rendered even more fragile with the Anti-Terror Act newly passed.

This sustained assault on human rights goes hand in hand with Duterte’s war on drugs that has claimed more than 6,000 persons at the hands of the Philippine National Police and thousands more by shadowy death squads. Not just adults but children have been targeted. And yet, no drug lords have been brought down.

And now the Duterte regime is pushing to have the death penalty reinstated. It was abolished in 2006, during President Gloria Macapagal Arroyo’s tenure, under pressure from the Catholic Church. Her government followed that up in 2007 by ratifying the Second Optional Protocol to the International Covenant on Civil and Political Rights, obligating signatory nations to abolish the death penalty. To reinstate the death penalty would violate a country’s obligations under international human rights laws and result in sanctions from trade partners, such as the European Union.

Duterte, like his amoral counterpart in the White House, cares little for such covenants. In his State of the Nation address last July, he called for capital punishment by lethal injection for drug offenders. Given that Congress is controlled by his allies, the House Justice Committee will no doubt approve the reinstatement, bringing the war on drugs to another level. Duterte has refashioned Aquino’s declaration to suit his own twisted, perverse agenda: that the Filipino is worth killing for.

As we once again honor the selfless act of Ninoy Aquino, we must also and always remember and honor those brave souls who were willing to sacrifice their own lives defending the rights of their fellow citizens to a peaceful and humane existence—a concept so alien to the current power holders in Manila.

Aquino’s martyrdom helped bring down spectacularly the Marcos regime three years later, in February of 1986. Kicking out the conjugal dictatorship was the easy part. The difficult task remains, of keeping the beautiful but fragile flowers of democracy from being uprooted.