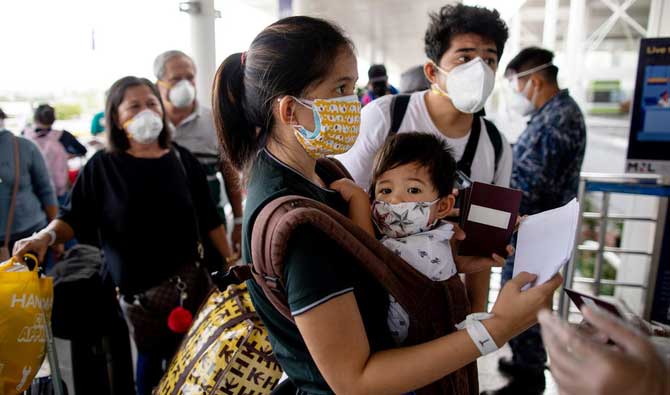 Repatriated Overseas Filipino Workers arrive at an airport after being allowed to go home following weeks of quarantine amid the spread of the coronavirus disease (COVID-19), in Manila, Philippines May 26, 2020. (Reuters)

Overseas Filipino workers (OFWs) are among the groups hard-hit by the Covid-19 pandemic. They continue to clamor for immediate action not only for their health and safety, but also for job security with decent pay. Their job situation is now more precarious as many of their employers and recruitment agencies are taking advantage of the pandemic to shortchange them on their wages and earned benefits or to illegally terminate them.

President Duterte in his 5th State of the Nation Address (SONA) last July 27 updated the public on the repatriation and reintegration efforts of the government for OFWs. He said, “We extended financial assistance to over 650,000 affected individuals in the formal sector, 110,000 OFWs abroad, and almost 83,000 repatriated OFWs.” However, while displacement of overseas workers is now a worldwide problem, governments often overlook the worsening practice of wage theft[1].

Wage theft is an employer’s unfair labor practice of withholding of a worker’s wage for work he or she has performed, or other outstanding claims[2].

Since March of this year, the Center for Migrant Advocacy Phils. Inc. (CMA) has received numerous reports from OFWs abroad and those repatriated of wage theft, particularly in the GCC (Gulf Cooperation Council) countries. Each week, CMA assists 2 to 4 group cases that consist of 15 or more workers who were laid-off due to the pandemic. Of the complainants, 59.16% are females while 40.83% are males. Most of these workers are in the following industries: construction; domestic work; food and service; and medical. Their common wage-related complaints are: non-payment and underpayment of wages; illegal termination; and  forcible leave without pay. To date, there are more than 120 cases of displaced OFWs that CMA has been assisting.

During a House hearing last July 14, Department of Foreign Affairs  (DFA) Undersecretary Sarah Lou Arriola reported that the P1 billion fund for the repatriation of OFWs would likely run out by  August 2020. DFA repatriated 82,057 overseas Filipinos as of July 13.

On the other hand, the Department of Labor and Employment (DOLE)  announced that President Rodrigo Duterte approved  last August 9 a P5 billion additional fund for repatriation and financial assistance for OFWs who are affected by the Covid-19 crisis[3]. A huge portion of the said fund will be given to the Overseas Workers Welfare Administration (OWWA) for the repatriation needs of displaced OFWs.

As for DOLE-AKAP (Abot Kamay ang Pagtulong) – a one-time financial assistance of US$200 (P10,000.00) to OFWs who have been displaced from their jobs — the original fund allotted for the said program was P1.5 billion. An additional P1 billion was released due to the increasing number of applications. Unfortunately, Labor Secretary Bello III reported that as of August 8, 2020, P2.388 billion already had been disbursed, benefiting 267,584 land-based and sea-based workers. Thus, the DOLE Secretary has requested for more funds for DOLE-AKAP because per the department’s forecast, at least a million OFWs will be displaced by 2021.

For more than 6 months now, the grim reality is that many OFWs who are still on-site have been waiting in vain.  Some of them were asked to stay in place until the company could fully operate again. Their employers and recruitment agencies could not provide concrete answer, making them feel more insecure about their employment status in a foreign land.

No job, not enough food to eat, no money to send to their families and delayed aid from our government – this is the dire situation of migrant workers around the world in the midst of the Covid-19 pandemic. One of the workers who approached CMA for assistance shared, “My co-worker’s wife is looking for money to buy a plane ticket for him because our agency requires us to spend for half the amount of the ticket. But isn’t that an obvious violation of our employment contract? Isn’t it the responsibility of our government to bring us back home especially during a pandemic? Is our welfare really their top priority?”

Due to this overwhelming predicament of OFWs, Migrant Forum in Asia (MFA), of which CMA Philippines Inc. is a member, together with Lawyers Beyond Borders (LBB), Cross Regional Center for Refugees and Migrants (CCRM), South Asian Regional Trade Union Council (SARTUC), ASEAN Services Employees Trade Union Council (ASETUC) and Solidarity Center, have launched a global campaign for the immediate establishment of a Transitional Justice Mechanism to address wage theft cases of repatriated migrant workers. This transitional justice mechanism hopes to respond to the volumes of wage theft cases and other related claims by migrant workers against their employers. The proponents call on governments and UN agencies to establish a justice system that addresses the following areas :

Reforming National Justice System – National and global claims commissions and compensation funds are no substitutes for fair and functioning justice systems at the national level. Availment of remedies under the transitional justice mechanism is not exclusive and without prejudice to the availment of more favorable legal remedies available under the existing national justice systems.

It will be noted that under RA 8042 provision on joint and several liability between the local recruitment agency and the foreign employer, repatriated OFWs whose deployment overseas was coursed through private recruitment agencies, may file money claims for wage theft cases and related issues before the National Labor Relations Commission (NLRC)[4] with their recruitment agencies as the respondents. Unfortunately, for those without recruitment agencies, legal redress is only available in the country of destination where their employers are located.

“Each year, millions of dollars are lost in potential remittances due to wage theft, even as countries of origin continue to explore new markets for deployment of migrant workers while countries of destinations thrive on cheap and exploitable migrant labour (Migrant Forum in Asia).”

The Covid-19 pandemic continues to impact adversely on the lives of migrant workers and their families. As an OFW who is a victim of wage theft puts it, “The table has turned now. My family in the Philippines is the one sending me money here in order for me to survive because I have not been working since March. I want to go home.”

For further details on our wage theft campaign kindly visit and inquire here:https://www.facebook.com/centerformigrantadvocacyph/  and https://justiceforwagetheft.org/

[2] According to the campaign “Call for an Urgent Justice Mechanism for Repatriated Migrant Workers”, the following are possible admissible cases under the campaign:

[4] The NLRC is a quasi–judicial body under DOLE that is tasked to promote and maintain industrial peace by resolving labor and management disputes. (https://www.officialgazette.gov.ph/filing-a-case-with-the-national-labor-relations-commission/#:~:text=The%20NLRC%20is%20a%20quasi,resolving%20labor%20and%20management%20disputes.