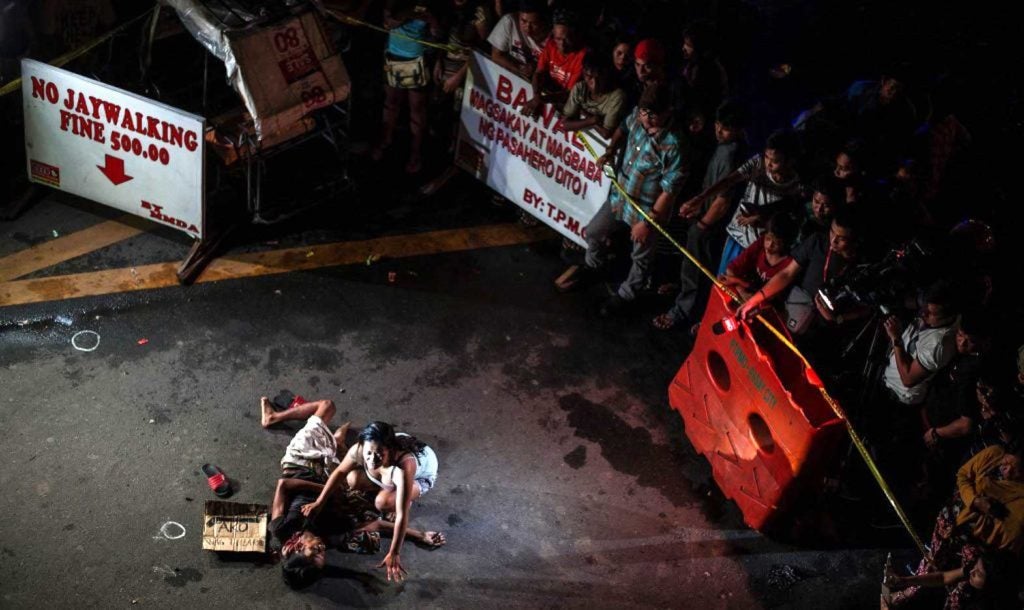 Jennilyn Olayres grieves beside the body of her partner, Michael Siaron, who was shot by an unidentified gunman and left with a cardboard sign with a message ‘I’m a pusher’ along a street in manila. Photo: AFP

Last week, the Philippine President publicly declared what he figured out as the real worth of drug addicts. “Tingin ko sa kanila aso… Sinisira ninyo ang Pilipinas (They are dogs…You’re destroying the Philippines.” In the Holy Book, “dogs” refer to unclean animals (1 Sam 24:14; Rev. 22:15), hence, bad men of contemptuous character are at times labeled as “dogs.”

While he unveiled a P20-billion plan to provide free Covid-19 vaccines for poor Filipinos, he ordered that junkies should not receive them from the government. ‘Yun ang utos ko… Ang tingin ko sa mga drug user, drug lord, aso (That’s my order…I look at drug users, drug lords as dogs)!” For him, the right to health is a right only reserved for good citizens; so junkies or “dogs” do not deserve any kind of help.

In a more thoughtful reaction to the presidential idea of “aso,” Sen. Joel Villanueva said that every Filipino has the right to be immunized from Covid-19 once a vaccine becomes available. “No one should be discriminated,” as the good senator has ably put it, because “it’s the obligation of the State to support the right to health of every citizen.” Who cares; the national leader doesn’t!

Obsessed with the ideology of Aryan supremacy, Adolf Hitler’s once told the world: “All Jews were untermenschen” or subhuman, and he killed 6 million of them. Yesterday’s Jews for Hitler are today’s junkies for the Filipino Head of State who theorizes that junkies are untermenschen, subhuman, or aso.

Thinking there’s method in his madness, he postulates that the opportunity to change is lost forever for drug addicts. Going by the way he consistently presents his arguments, it looks like he doesn’t believe in rehabilitation at all. Therefore, the only possible treatments for those he perceives as enemies of the State and destroyers of the nation, “Sinisira ninyo ang Pilipinas,” are discrimination and intentional death.

Gigil na gigil (livid), he appears to manifest consistency in his resolve. One month before he got elected, he heralded in April 2016, “All of you who are into drugs… I’d kill you.” Now we know it wasn’t solely for a grandiloquent campaign effect. Sadly, some clergy and most Filipino Christians voted for him in 2016, realizing he really meant what he said. Four years into his administration, more than 6,000 are dead and it doesn’t matter whether the victims of his bloody war on drugs were merely SUSPECTED users and pushers.

Junkies are “dogs” in his vocabulary, for mere suspects were denied their fundamental right to be presumed innocent until proven guilty. For him, the moral prudence of “the end does not justify the means” is baloney. Like Hitler, he wanted to kill, kill, and kill all untermenschen and “aso.” “Hitler massacred 3 million Jews,” he made a comment in September 2016. “…There’s 3 million drug addicts. I’d be happy to slaughter them.”

Overconfident of his ways, he rejects the age-old code, which articulates that every individual human life comes from God, that God alone can take it back, and that all governments are only God’s stewards and not the owners of human life. He doesn’t care even if more and more governments are accepting the splendid truth about “The Uniqueness of Man,” as expounded by the English evolutionary biologist Sir Julian Huxley in 1947, saying that the human being is a unique species (peculiaris), endowed with a special dignity.

From such scientific and cultural understanding of human dignity, contemporary society seems to fight tooth and nail in the legislative and judiciary halls for the basic right to live, as evidenced by the fact that more educated governments across the planet have rejected the death penalty. He doesn’t care. Junkies are “dogs.”

He doesn’t care if the Word of God, a greater spring source of wisdom for billions of global citizens, is constantly reminding believers that the human person is of divine origin (notion of imago Dei), has transcendental nature (immortal soul), and therefore sacred. That’s idiocy for him.

He doesn’t care if Christianity fights tooth and nail to promote the fundamental principle that the sick, disabled, parents in the home of the aged, the comatose, convicts on a death row, junkies, the baby in the womb, all of them without exception, should be valued and protected, regardless of their  contribution to society or lack of it.