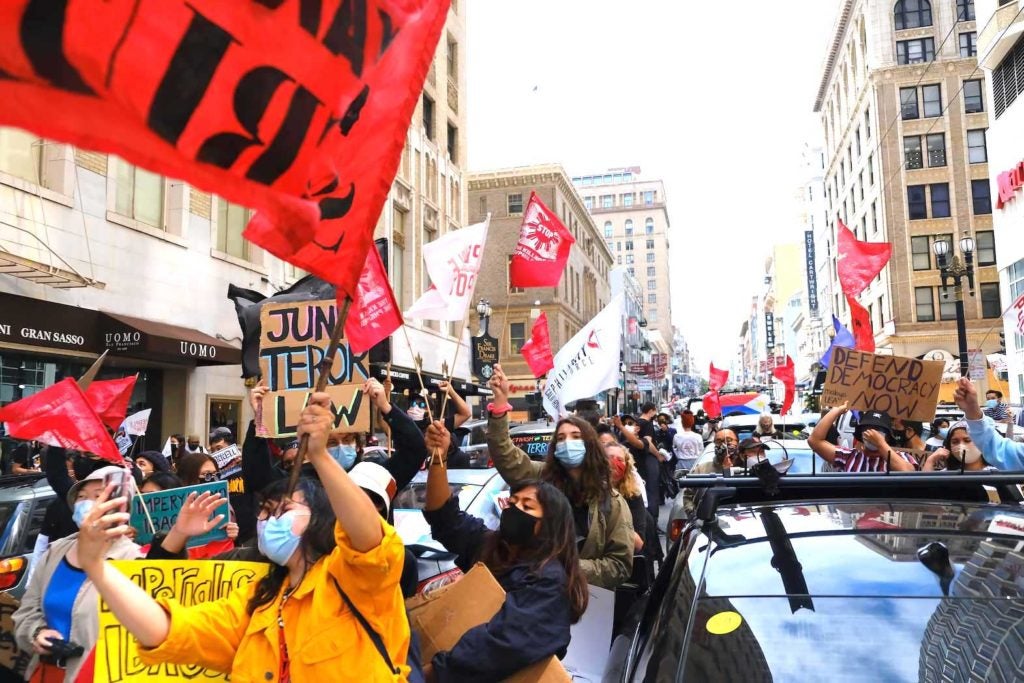 Protesters protest block off section of Sutter Street in San Francisco, in front of the Philippine Consulate. MIGUEL CARRION

SAN FRANCISCO — Passage of the Anti-Terror Law, rising COVID cases, and the harassment of activists and government critics have drawn a strong response from Filipinos at home and abroad, many of whom have taken to take to the streets to denounce what they see as continuous attacks on democracy.

Members and allies of the Filipino community gathered in front of the San Francisco Philippine Consulate on Monday to counter President Rodrigo Duterte’s State of the Nation Address (SONA). Similar protests were held in Los Angeles, New York, Chicago, Washington, DC and some cities in Canada.

The United People’s SONA was organized by Bayan USA and Malaya Movement along with other Bay Area based groups and featured a special performance by rapper Ruby Ibarra.

The rally came a day after President Duterte delivered his SONA, which was preceded by a ban on protests during his speech in certain areas around Metro Manila, multiple arrests of protesters, activists, and the confiscation of protest materials.

A key target of the protests was the newly enacted Anti-Terror Law, with signs, banners and chants declaring “activism is not terrorism.” 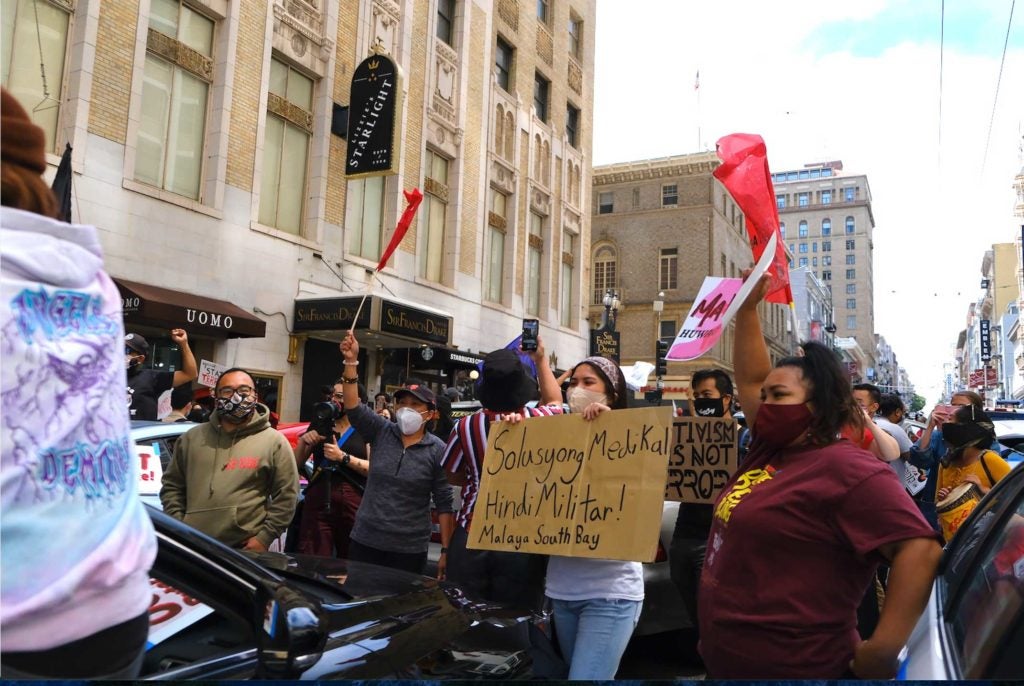 A protester holds sign demanding medical, not military solutions to the Covid-19 pandemic in the Philippines.MIGUEL CARRION

“I know that if I don’t say anything it’s not using my platform. Because I have the privilege as a Filipino American to actually speak out, whereas our kababayans back home don’t have that liberty and freedom anymore,” declared by rapper and activist Ruby Ibarra.

While Duterte claimed that there were no reports of abuse throughout the duration of martial law in Mindanao. The human rights group Karapatan Alliance thousands of instances of civil rights violations within the two-year military rule in the region.

In a 2017 press conference, President Duterte threatened to destroy Lumad schools in Mindanao stating, “I will use the armed forces, the Philippine Air Force. I’ll really have those bombed because you are operating illegally, and you are teaching the children to rebel against government.”

Frankie Ortanez from Liyang Network, an organization that advocates for Lumad communities, said that Lumad schools have been tagged as breeding grounds for the New People’s Army, which they emphasize is false.

“It’s about autonomy, it’s about sovereignty, it’s about them deciding what their future is going to look like and getting to be the caretakers of their land and live how they want,” stated Ortanez. Ortanez described the closure of Lumad schools as “a violent way to attack multiple generations at once.”

“From what I’ve heard from relatives and friends in the Philippines, continuously across the board, is that there is no concrete plan in terms of figuring out how to address the pandemic” said rapper Ibarra, who is also a working scientist. “The administration in the Philippines, (must) put a plan in place to make sure that people are taken care of during this pandemic.”

The Philippines currently has the second highest rate of COVID-19 infections in Southeast Asia, with 85,486 total cases according to the Department of Health website at the time of writing.