What would Rizal do if he were alive amid EJK?

What would Rizal do if he were alive amid EJK? 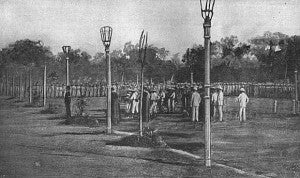 Dr. Jose Rizal, 35, died by musketry, December 30, 1896, at the hands of the Spanish colonizers. The 120th year anniversary of his martyrdom will be marked in Chicago with a floral offering at his life-size monument at Margate Park and a cultural program in the evening at the function room of the Seafood City, both venues at the city’s north side.

As a Rizalist and a student of law, allow me to share my observations and beliefs as to the present state of human rights in our country. What exactly are human rights? It is defined as norms of protection, belonging to everyone, everywhere, all the time. It addresses contemporary problems and institutions which affect a wide range of human existence, thus it is not limited to one aspect of humanity but rather cover the civil, political, social and economic spectrum of life.

Human rights are both freedoms and entitlements: freedoms of action; freedom from unwarranted and arbitrary actions by government; and entitlements to goods, services, facilities and institutions necessary for all of us to enjoy our human rights.

There are two kinds of rights:  absolute or non-derogable and derogable  rights .

Absolute or non-derogable rights are rights that may never be suspended or limited under any and all circumstances; these include the right to life, freedom from torture, right against slavery, right to recognition as a person everywhere, freedom of thought, conscience and religion, and right against imprisonment for debt.

Derogable rights, on the other hand, are rights that may suspended or limited during times of emergency, like freedom of speech, right to peaceful assembly and association, freedom of movement and right to travel.

The obligations on government arising from the right to life include: protect life against unwarranted actions by public authorities and private individuals; prohibit arbitrary killings by state agents; prevent disappearance of individuals; and take measures to protect the life of those in custody.

Any extrajudicial, summary or arbitrary executions are killings without due process of law and are in violation of the safeguards enshrined in various domestic, international and humanitarian laws.

The figures translate to a monthly average of 1,169 persons killed; if trend continues, we may see 84,168 persons killed at the end of the term of the current administration.

Most recent and highly questionable killing was that of Mayor Rolando Espinosa and Raul Yap on November 5, 2016, inside a jail cell by police operatives. The head of the operative was suspended but later reinstated on order by President Duterte.

While human rights impose obligations on government, it also imposes duties on each of us, primarily the duty to exercise our rights and freedoms responsibly, making sure that as we enjoy our human rights we do not step or infringe on anyone else’s enjoyment of their human rights.

What would Rizal do if he were alive today amidst the EJK?

Rizal would educate us on our rights to live in a manner consistent with our common humanity and dignity. He would expose the ails of the present state of our society. He would exhort us to be extra vigilant in preventing human rights abuses. He would inspire us and encourage us to rely heavily on the hope that the slaves of today would not be tyrants of tomorrow.

Sir Willie Cantos, KCR, is with the Knights of Rizal Mississauga (Canada) Chapter. The question “What would Dr. Jose Rizal do if were alive today in the midst of extrajudicial killings?” was posed to members of the Knights of Rizal just before the 120th year commemoration of the martyrdom of the PH National Hero on Dec. 30, 2016.