Where does Covid vaccine search stand?

Where does Covid vaccine search stand? 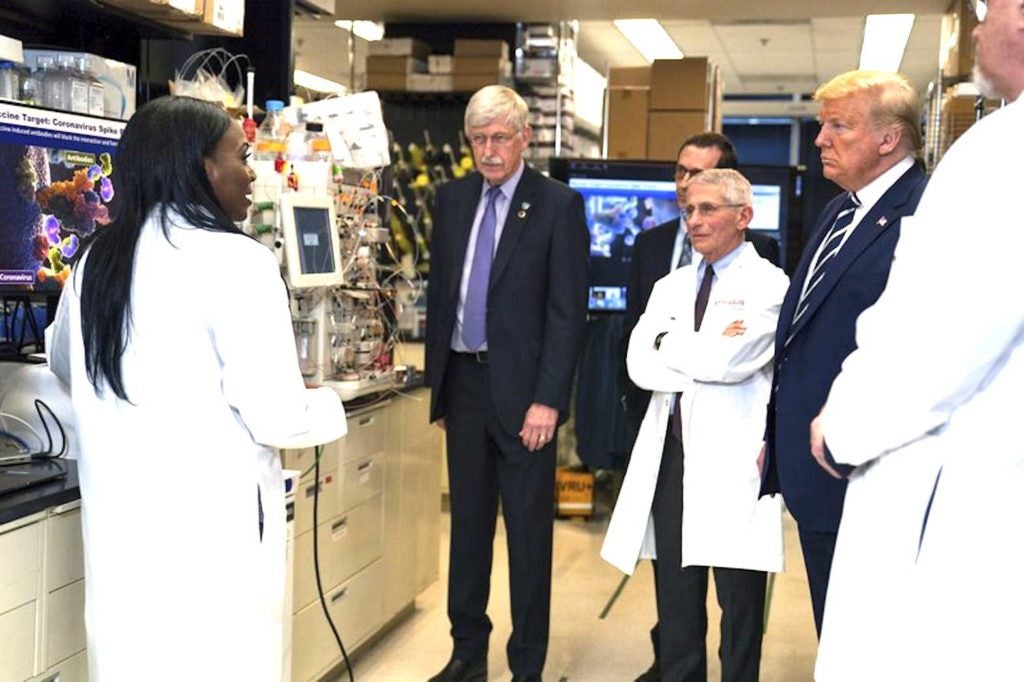 Dr. Kizzmekia Corbett, left, senior research fellow and scientific lead for coronavirus vaccines and immunopathogenesis team in the Viral Pathogenesis Laboratory, talks with President Donald Trump as he tours the Viral Pathogenesis Laboratory at the National Institutes of Health in Bethesda, Md. Dozens of research groups around the world are racing to create a vaccine as COVID-19 cases continue to grow. (AP Photo/Evan Vucci)

More than four months into the coronavirus pandemic, how close are the U.S. and the world to a safe and effective vaccine? Scientists say they see steady progress and are expressing cautious optimism that a vaccine could be ready by spring.

As of early July, roughly 160 vaccine projects were underway worldwide, according to the World Health Organization.

Generally, a vaccine trial has several phases. In an initial phase, the vaccine is given to 20 to 100 healthy volunteers. The focus in this phase is to make sure the vaccine is safe, and to note any side effects.

In the second phase, there are hundreds of volunteers. In addition to monitoring safety, researchers try to determine whether shots produce an immune-system response.

The third phase involves thousands of patients. This phase continues the goals of the first two, but adds a focus on how effective the vaccine is in protecting people exposed to the pathogen, in this case the coronavirus. This phase also collects data on more unusual negative side effects.

In ordinary circumstances, these phases take years to complete. But for the coronavirus, the timeline is being shortened. This has spurred more public-private partnerships and significantly increased funding.

Here’s a rundown of the vaccine candidates that are furthest along in the clinical phases:

The three vaccine candidates that are furthest along are in phase 3.

One is being developed by researchers at Oxford University in the U.K. It uses a weakened version of a virus that causes common colds in chimpanzees. Researchers then added proteins, known as antigens, from the novel coronavirus, in the hope that these could prime the human immune system to fight the virus once it encounters it.

Another candidate in a phase 3 trial is being developed in China. It uses a killed, and thus safe, version of the novel coronavirus to spur an immune reaction.

And on July 15, the biotech company Moderna, which is partnering with the National Institutes of Health, announced that it would be moving to phase 3 within two weeks.

Two others have made it as far as phase 2, while eight others are finishing their phase 1 trials while also beginning phase 2 trials.

These candidates are being developed by a mix of corporations and institutions in several countries. These efforts seek to leverage a range of technologies.

One uses RNA material that provides the instructions for a body to produce the needed antigens itself. This is a relatively untested approach to vaccination, but if it works, it has aspects that could make it easier to manufacture. Another approach is similar, but uses DNA instead of RNA.

One U.S. biotech firm, Novavax, is receiving federal funding to produce a vaccine that uses a lab-made protein to inspire an immune response.

Beyond these, another 10 vaccine candidates are in phase 1 clinical trials, while 140 haven’t reached the clinical phase yet.

Having so many potential vaccines this far along is impressive, experts say, given the short time scientists have known about the novel coronavirus.

“Overall, the pace of development and advancement to phase 3 trials is impressive,” said Matthew B. Laurens, associate professor at the University of Maryland School of Medicine’s Center for Vaccine Development and Global Health. “The public-private partnerships have been highly successful and are achieving goals for rapid vaccine development.”

In addition, the fact that several types of vaccine approaches are being tested means we aren’t putting all of our eggs in one basket.

“We will need several candidates should any one of these experience difficulties in manufacturing or show a safety signal when implemented in larger numbers of people,” Laurens said.

Meanwhile, at a time of rising public skepticism of government and vaccines, the Food and Drug Administration recently released additional guidelines on vaccine effectiveness. The new guidance requires vaccines to prevent or decrease the severity of the disease at least 50% of the time if they are to win the agency’s approval.

The FDA guidelines “reaffirmed the very rigorous FDA process for approving any vaccine. That gives a great deal of reassurance that this was going to be handled by the book,” said William Schaffner, a professor of preventive medicine and infectious diseases at Vanderbilt University Medical Center. “The more we talk about doing things fast, the more the public thinks, ‘They’re probably cutting corners.’”

How fast will we have access to a workable vaccine?

In early April, Kathleen M. Neuzil, director of the University of Maryland’s vaccine center, told PolitiFact that if all went well, there might be five or six vaccines in trials within six months. Now, 3 1/2 months later, there are two to three times that number.

Anthony Fauci, director of the National Institute of Allergy and Infectious Diseases, and other officials have remained consistent in their estimation of the timeline: 12 to 18 months from the start of the pandemic, or roughly the late spring of 2021.

Schaffner told PolitiFact that he continues to see the first quarter of 2021 as a reasonable target. “I think that’s where the needle is pointing,” he said.

It remains to be seen how fast vaccines can be manufactured and distributed once approved for general use. Officials are also grappling with which Americans will get access first. So it’s unclear how long a person would have to wait to get vaccinated.

Laurens said he is not overly concerned about the distribution, because that is something that officials have long experience with. “Well-established programs exist for vaccine distribution, including for seasonal vaccination of large numbers of individuals,” he said.

Another hopeful sign, Schaffner said, is that the coronavirus itself seems to be relatively stable. There had been concern that the novel coronavirus, like many other viruses, is mutating over time. If the virus changes enough, that could become a problem that bedevils vaccine researchers.

But so far, that hasn’t happened. Even if evidence emerges that mutations are making the virus more transmissible, or that a new variant is making people sicker, that shouldn’t affect the vaccine process. “The central core of the virus would remain the same,” Schaffner said.

During the past month, there has been relatively little news about how much progress is being made on particular vaccines. Schaffner is not worried by the relative quiet.

“In a vaccine trial, if there’s an adverse safety finding, the guillotine comes down and that trial is stopped,” he said. “So quiet is good, because we’d know if something bad happens.”