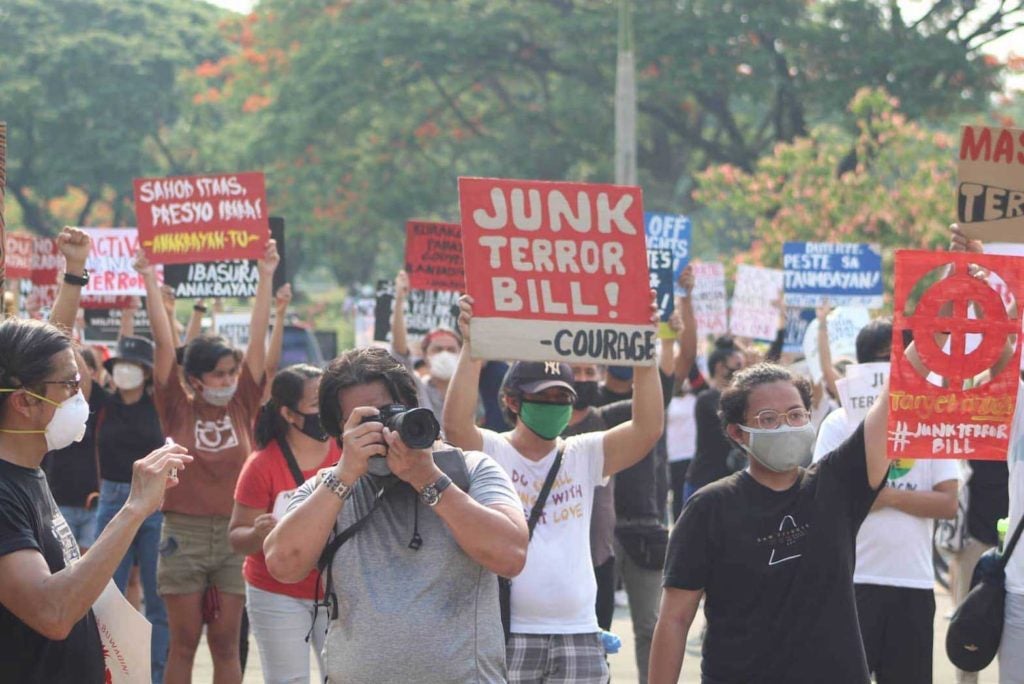 NEW YORK—Last July 6, seven original framers of the 1987 Constitution that still serves as the binding and supreme law of the land issued a statement highly critical of the Anti-Terrorism Act, or ATA.

The statement reads, in part, that ATA “poses serious mishaps to the cause of civil liberties. Those who differ will be branded as recalcitrant and their silencing would have a deceptive justification. This law precisely creates a climate of fear, sends a chilling effect [to] those who wish to express their legitimate grievances, state their aspirations, and wish to engage in open and democratic debate, and threatens the rights of associations who may wish to dissent and question the actuations of those in power.”

The Framers’ statement concludes: “We condemn this Anti-Terrorism Act of 2020, which brings us back to the 1970s. We need to move forward, not backwards. We need to focus on what truly ails our people in their struggle for survival, while we deal with an inadequate public health system, mass poverty, gross inequalities, and not squander this unique opportunity of coming together as a people in the time of the pandemic.”

I had the opportunity to e-mail some questions to one of the Framers and signatories to the July 6th statement, the well-known human rights activist and ex-Jesuit Edmundo Garcia who’s worked with Amnesty International. Here are his replies, edited for clarity:

INQ: We don’t seem to have learned from the terrible experience of martial law. To what do you attribute this?

EG:  We haven’t learned from our martial law experience because our schools, our religious and business leaders have not been able to share the lessons of martial law with our young in a critical, consistent and intelligent manner. Besides, we have political leaders who have refused to take a courageous stand on the issue dealing with the Marcoses—so that they would rather form alliances and benefit from the largesse of the Marcoses rather than ensure that the Marcos legacy does not further corrupt our socio-political life. (Example, the [burial of the late dictator at the] Libingan ng Mga Bayani, and attempt by the Marcoses to revise history as well as Duterte’s support for Bongbong and Imee in his public speeches.)

Moreover, our judiciary has lacked the independence and the integrity to convict those who have abused public trust and stashed away billions in the past.

Finally, there is the question of leadership and the inability of political parties to offer authentic alternatives to our people so that the allure of personalities with promises and the seduction of demagogues become irresistible.

INQ: Are there any plans to file suit in the Supreme Court to declare that the ATA is in fact unconstitutional? How likely is it that the current SC will strike this down?

EG:  The Framers (7 of us among the dozen or so surviving) have made a strong statement condemning the ATA and many other alliances have taken a stand, and we have encouraged two of the lawyers among our ranks (Chris Monsod and Fely Aquino-Arroyo) to file a petition before the SC—which they did yesterday together with [the] Ateneo Human Rights Center; as FEU and LaSalle lawyers have done before, some have said that this is now UAAP vs. the Executive Secretary.  However, with the SC stacked with Duterte appointees I doubt very much whether the petitions will prosper but it is important to air the arguments in public.

INQ: Isn’t ATA essentially martial law in all but name, as it gives the police and the military authority normally reserved for the courts?

EG: ATA brings us back to the ‘70s precisely when the Executive ruled by decree and made decisions with the democratic system of checks and balances.  It is also an assault on our Bill of Rights, because it will threaten those very rights that form the foundations of a democratic society (free speech, the ability to speak truth to power, judicial authority to determine probable cause and issue arrest warrants).  Moreover, the chilling effect on those who speak and write even online will inhibit or deter our people’s ability to engage in critical public debate and dissent.  In brief, it is an assault on the rule of law—and will open way to arbitrary arrests, red-tagging and the politics of intolerance and vindictiveness.