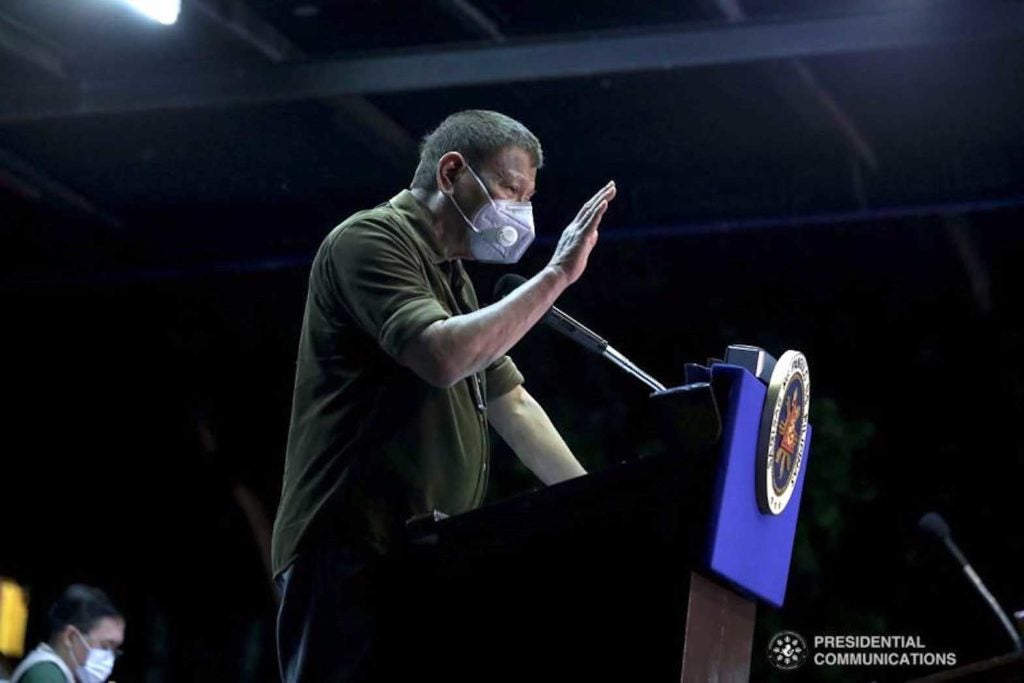 Rodrigo Duterte, who terrorized the nation with mass killings and a cynical, vicious campaign against the country’s democratic institutions, just signed a law aimed at branding people who dare oppose him as terrorists.

We just need to remember what one of the greatest Filipinos in our history said about how dictators — like Ferdinand Marcos and now Duterte — use the law to abuse their power and justify repression.

“No government can depend on force alone,” the late Senator Jose Diokno, who led the victorious fight against the Marcos tyranny, said more than 30 years ago. “If it continuously depends on force, then the day is going to come when its force is not going to be enough. So government tries to transform that force into law so that it favors the interest of those who have power.”

Diokno said this in the courageous 1983 documentary “To Sing Our Own Song” produced by the BBC and narrated by Senator Diokno himself. (I encourage young Filipinos to watch it on YouTube.)

The mass killings Duterte inspired have claimed the lives of thousands of Filipinos. He imprisoned a prominent political opposition leader, Senator Leila De Lima, an act that has been condemned by other countries. He has moved aggressively to silence media outlets that dare report on his abuses. He shut down ABS-CBN and has been harassing Rappler and its editor Maria Ressa.

If Duterte was hoping to silence his critics, he has failed.

The resistance to him and his bloody regime is growing. Respected international human rights organizations, from Amnesty International, the United Nations Human Rights Commission and Human Rights Watch, have turned the spotlight on Duterte’s abuses and condemned his brazen disregard for the rights of Filipinos.

And that’s why he needed to do something. He needed another weapon to try to justify his rule, to crackdown on those who oppose his dictatorship. He needed a new cloak of deception to try to hide the murders, the corruption and the injustice.

He needed a new law.

He needed new legislation so he can harass even more of his critics, so he can imprison anyone who dares defy him, so he can brand activists, including young people who dare fight back against the killings and the abuse of power, as terrorists.

It’s the oldest trick in the dictator playbook. Get a rubber stamp legislature to come up with a new law that would give you some legal cover so you can harass, abuse and malign even more of your opponents. So you can tighten your grip on power.

But as history, including our own, has shown repeatedly, that trick only works for a limited time.

Dictators eventually fall. We know this. We’ve witnessed this.

More than three decades ago, young Filipinos, including many lawyers, stepped up to the challenge of defeating a tyrant.

In the documentary, Diokno addressed a group of Filipino lawyers and law students, saying: “Please don’t ever confuse legal rights with justice. As lawyers, and as law students our function is not only to cause respect for law it is to improve law. So it will truly give us justice.”

It took 14 years to finally defeat Marcos, but eventually Filipinos topped his dictatorship.

As a new one emerges, we need to remember what Diokno also said about the fight ahead.

“Even if we have to wade through blood and fire, we will be free, we will develop,” he said in the documentary. “We will build our own societies. We will sing our own songs.”

Terrorist presidents can pass all the bogus anti-terrorism laws they want. But eventually they are overthrown.