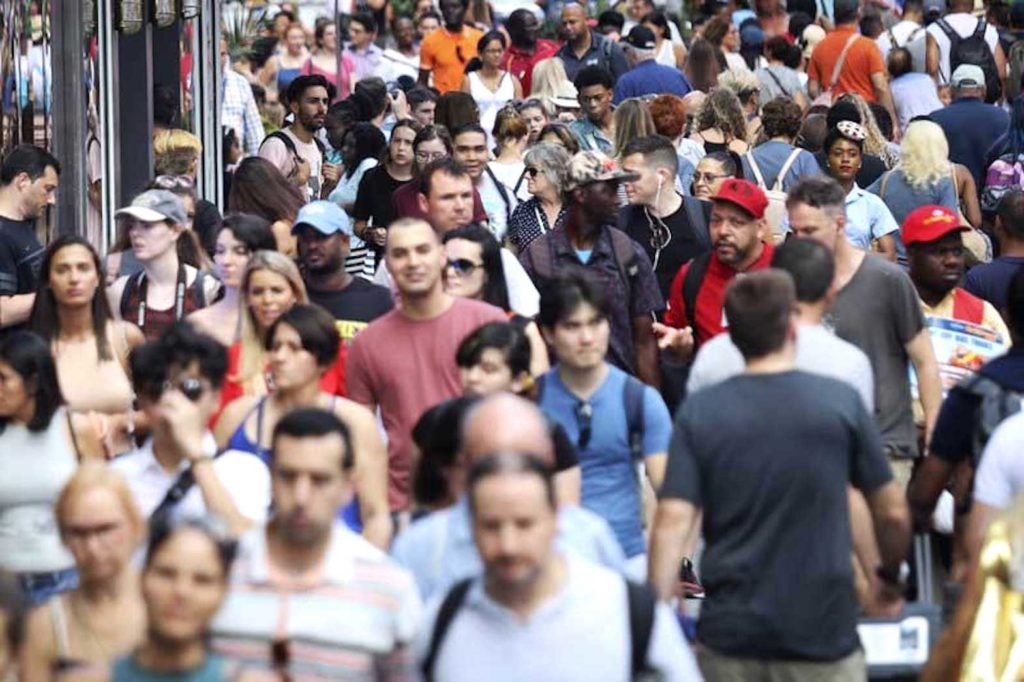 In this Aug. 22, 2019, file photo, people walk through New York’s Times Square. The population of non-Hispanic whites in the U.S. has gotten smaller in the past decade as deaths have surpassed births in this aging demographic, and a majority of the population under age 16 is nonwhite for the first time though they are fewer in number than a decade ago, according to new figures released Thursday, June 25, 2020, by the U.S. Census Bureau. (AP Photo/Bebeto Matthews, File)

ORLANDO, Florida— For the generation of Americans not yet old enough to drive, the demographic future has arrived.

For the first time, nonwhites and Hispanics were a majority of people under age 16 in 2019, an expected demographic shift that will grow over the coming decades, according to figures released by the U.S. Census Bureau on Thursday.

“We are browning from bottom up in our age structure,” said William Frey, a senior fellow at The Brookings Institution. “This is going to be a diversified century for the United States, and it’s beginning with this youngest generation.”

At the same time, the number of non-Hispanic whites in the U.S. has gotten smaller in the past decade as deaths surpassed births in this aging demographic, according to the Census Bureau population estimates.

Since 2010, the number of whites who aren’t Hispanic had dropped by more than 16,600 people. But the decline has been escalating in the past three years, with the number of non-Hispanic whites dropping by more than a half million people from 2016 to 2019, according to the Census Bureau population estimates.

In 2019, a little under 40% of the total U.S. population was either nonwhite or Hispanic. Non-Hispanic whites are expected to be a minority of the U.S. population in about 25 years.

A natural decrease from the number of deaths exceeding births, plus a slowdown in immigration to the U.S., contributed to the population drop since 2010 for non-Hispanic whites, whose median age of 43.7 last year was by far the highest of any demographic group. If these numbers hold for the 2020 census being conducted right now, it will be the first time since the first decennial census in 1790 that there has been a national decline of whites, Frey said.

“It’s aging. Of course, we didn’t have a lot of immigration, that has gone down,” Frey said. “White fertility has gone down.”

In fact, the decrease in births among the white population has led to a dip in the number of people under age 18 in the past decade, a drop exacerbated by the fact that the much larger Millennial cohort has aged out of that group, replaced by a smaller Generation Z.

Over the past decade, Asians had the biggest growth rate of any demographic group, increasing by almost 30%. Almost two-thirds of that growth was driven by international migration.

The Hispanic population grew by 20% since 2010, with almost three-quarters of that growth coming from a natural increase that comes when more people are born than die.

The Black population grew by almost 12% over the decade, and the white population increased by 4.3%.

The nation’s seniors have swelled since 2010 as Baby Boomers aged into that demographic, with the number of people over age 65 increasing by more than a third. Seniors in 2019 made up more than 16% of the U.S. population, compared to 13% in 2010.

In four states — Maine, Florida, West Virginia and Vermont — seniors accounted for 20% of the population. That’s a benchmark that the overall U.S. population is expected to reach by 2030.