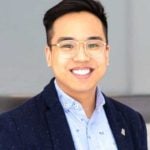 At 28, Phil De Luna is the youngest Program Director at the National Research Council of Canada (NRC). CONTRIBUTED

TORONTO — He is the youngest director in NRC’s over 100 year history.

The Taiwan-born, Windsor-bred scientist came to Canada at age four when his parents immigrated in 1996. His father found work in the automotive industry until the recession hit in 2008.

“I was always a curious kid,” he told philippinecanadiannews.com (PCN.Com) in a telephone interview from his home in Toronto where he is working due to the coronavirus restrictions.

“I always wanted to be a scientist growing up. My favorite TV show was Magic School Bus. Do you remember those Scholastic book fairs? I’d always buy the science experiments,” he told VICE in another interview.

“I started thinking about challenges I could tackle, and climate change, in my opinion, is the biggest challenge that humanity faces.”

His parents were a great influence on his education, encouraging him to focus and excel in his studies.

“My Dad’s advice was to make sure that I was doing something that I liked, that I cared about, and that I found important,” he told VICE.

Like many immigrants starting a new life in Canada, they “could not afford a lot, including day care. ” he told PCN.com.

“So when I was about 10 or 12, my mother would drop me off on her way to work at Tim Horton’s and I would hang out in the school yard waiting for school to open.”

He worked part-time jobs to help his way through undergraduate school, but he also dreamed big. He wanted something bigger than Windsor and pursued his passion in Chemistry and the environment.

He completed his doctorate in Materials Science and Engineering at the University of Toronto in 2018.

A year later in February 2019, he became the youngest (at age 27)  program director of the National Research Council of Canada (NRC) – the first in its 100 years history. 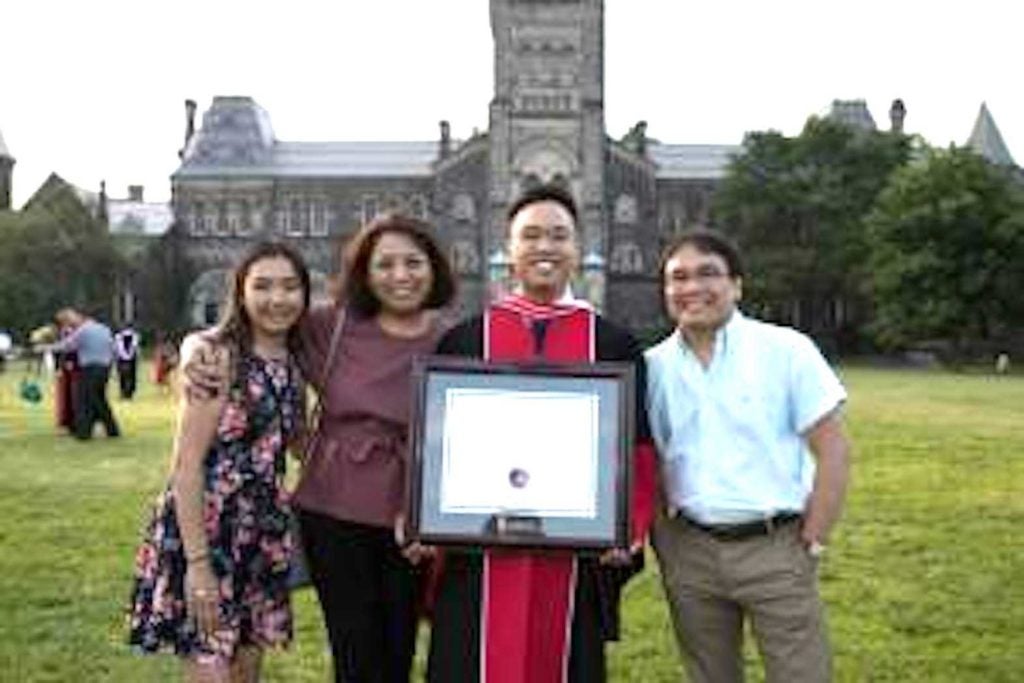 Phil with sister, Liana, and parents, Joy and Art, during graduation at the University of Toronto in 2018. CONTRIBUTED

As director of the Materials for Clean Fuels Challenge Program, he leads a $57 million collaborative research program on Canada-made materials to decarbonize the oil and gas /petrochemical industry.

As program director, he brings together some of the most brilliant research minds in the world to tackle climate crisis.

“Imagine if we could transition an entire industry and economy into making clean energy. It’s a massive opportunity, and the world is already moving there. If Canada can position ourselves to be the first movers of that, then that’s where economic growth can be. It has to happen. So why don’t we lead it?” De Luna asks.

His extensive academic experience and research includes a visiting scholar at Stanford, UC Berkeley, the Lawrence Berkeley National Lab, and the Canadian Light Source. He was a researcher at the IBM TJ Watson Research Center in the summer of 2016 and the Toyota Research Institute in the summer of 2018 where he worked on biosensing and machine learning for batteries and fuel cells.

He co-founded CERT, a carbontech venture that converts CO2 into ethylene, where he raised $2M in non-dilutive funding.

De Luna is a member of the Board of Directors of CMC Research Institutes – a non-profit organization focused on developing solutions to reduce industrial carbon emissions. He serves on the Organization for Economic Co-operation and Development (OCED) Advanced Materials Steering group and is also a Mentor in the Matter and Climate Streams of Creative Destruction Lab, helping technology and science based startups succeed.

He has published 39 papers in high-impact journals such as Science and Nature. His research has been featured in mainstream media such as CBC, Newsweek, The Independent, VICE, and others.

“To be successful, you have to be excellent at what you do. And for young Filipinos it is difficult to have the  established network and privilege that white Canadians have to be excellent without education. As immigrants, so much of social capital and social wealth comes with connection with families, parents and others. You have to  build those connections yourself.”

“Push your boundaries and don’t just be comfortable. Invest in education and gain a higher earning potential. Look up to examples of people in the community who excelled in their fields.”