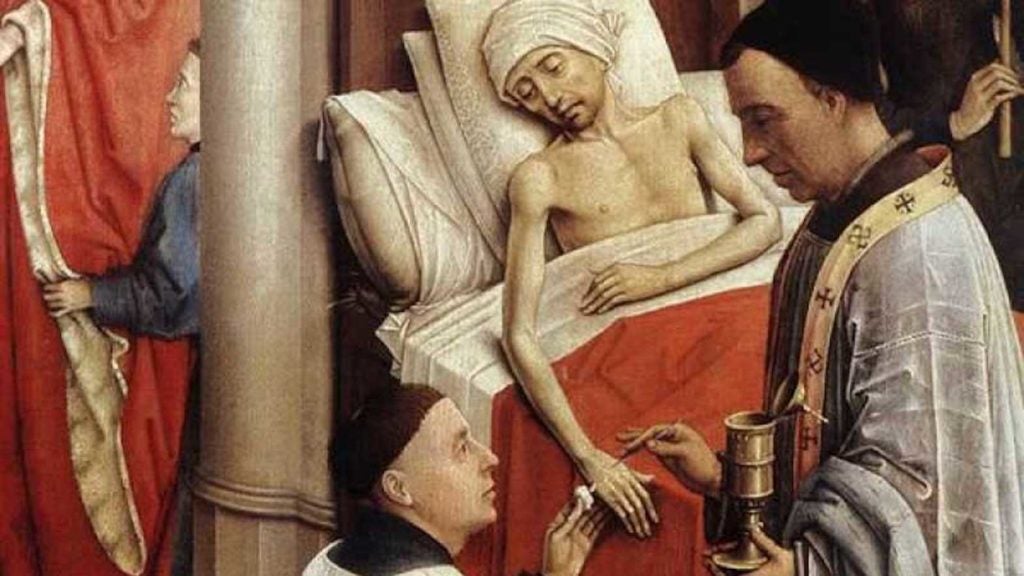 Anointing of the Sick, from Wikipedia

In Jaro, Iloilo, Graciano López Jaena, at 18, was blasting the Spanish friars until his pen ran out of ink. In Spain, as a fiery orator who poetically spewed fire and brimstone in every socio-political gathering, López-Jaena was initiated a Mason in 1882 and was later elected Grand Master of the lodge Revolución.

López Jaena died in Barcelona alone, without any record of hospital admission, demise, or burial. The local officials had no inkling of exactly where he was buried in the mass grave called La Fossa de Pedrera in Montjuic. How sad.

Like López Jaena’s, 33rd-degree Mason Marcelo Del Pilar’s death in Barcelona passed unnoticed in official circles, even among fellow Masons. Epifanio de los Santos mentioned Del Pilar’s death in one brief sentence: He died of tuberculosis generalizada “very far from his motherland… in the arms of his friends.”

Inang Bayang wept unceasingly the entire year of 1896, for she lost three of her most eminent sons: López-Jaena in January, Del Pilar in July, and Rizal in December. Que lastima!

Jose Rizal in Fort Santiago attended the Holy Mass at 3:00 in the morning of his execution, went to confession before taking Holy Communion, knelt down, recited the rosary with his family, and got reconciled with God and his enemies before his slow marcha a muerte.

At the turn of the 20th century, the Iglesia Filipina Independiente (IFI) became its own Congregation for the Saints like that one in Rome and canonized Jose Rizal and Padres Burgos, Gomez, and Zamora as martyrs so “that the faithful may emulate their lives of unselfishness and abnegation” (NHCP, “Jose Rizal: A Hero-Saint?,” 9/19/12). But Rizal and the Gomburza were Roman Catholics until their last breath, never Aglipayans!

Preparing to disembark for Manila in early 1896, Marcelo H. Del Pilar got very sick and was instead confined at the old Catholic Hospital de la Santa Creu in Barcelona. His hospital admission was officially recorded in two registry books, namely: The Libro de Defunciones and the Registro de Entradas de Enfermos. From the first book, we read one detail of utmost importance:

The Priest-in-Charge of the Catholic hospital testified that our hero received the Viaticum and the Extreme Unction, the last Santos Sacramentos administered to a dying Christian. Normally, the Catholic chaplain would anoint with holy oil in the form of a cross the eyes, ears, nose, mouth, hands and feet, senses instrumental to every person’s sins while reciting this prayer: “Through this Holy Unction and through His most tender mercy, may the Lord pardon thee whatever sins thou hast committed by seeing, hearing, etc.”

As a Catholic rule of thumb, the reception of the last sacraments presupposes that the recipient is conscious, willing, worthy, and well prepared. If offered by the priest, the sick is always free to accept or reject it.

Los Santos Sacramentos in the Roman Catholic Rites have the following effects on the dying: Mystical union with Christ in His meritorious passion and suffering; the forgiveness of his sins; and his spiritual preparation for passing over to eternal life (Catechism of the Catholic Church, 1532).

In his last moments, as testified by Fernando Canon, in whose arms Del Pilar breathed his last, our hero was thinking of his country and his family. Though weak and feeble, Del Pilar whispered his last dying request: “Amigo mio, promise me that you’d tell my daughter, Sofia, that I made my confession and received Holy Communion.”

In Bulacan many years before, little Sofia grew up not seeing his father, a diehard anti-friar, going to Mass.