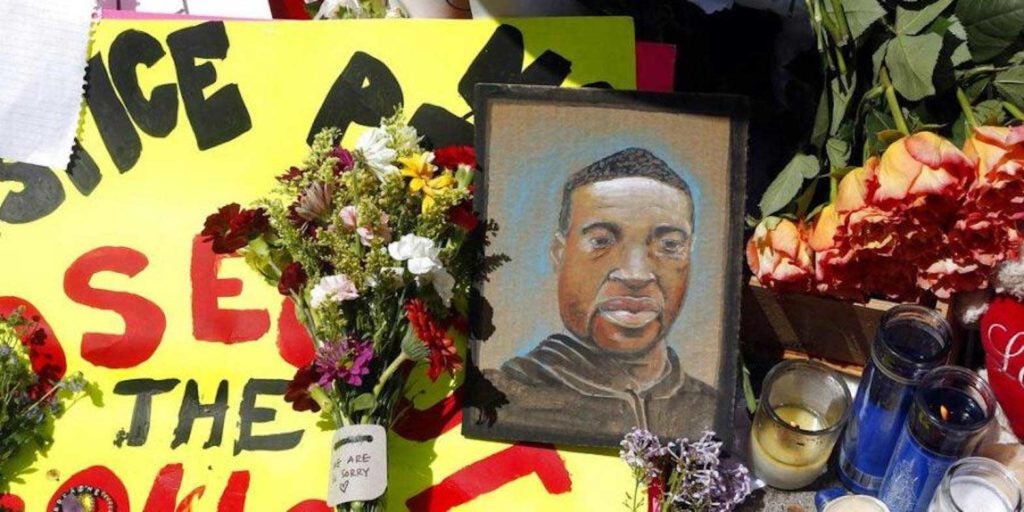 A chain portrait of George Floyd is part of the memorial for him, Wednesday, May 27, 2020, near the site of the arrest of Floyd who died in police custody Monday night in Minneapolis after video shared online by a bystander showed a white officer kneeling on his neck during his arrest as he pleaded that he couldn’t breathe. (Photo | AP)

NEW YORK— As recorded on a bystander’s camera, George Floyd, a 46-year-old African American, handcuffed and lying on the ground, pleaded with Derek Chauvin, a Minneapolis cop who had his knee on his neck for almost nine minutes. For approximately six of those minutes, one can hear Floyd’s strangled, desperate voice. These were his last words, before he gave up the ghost: 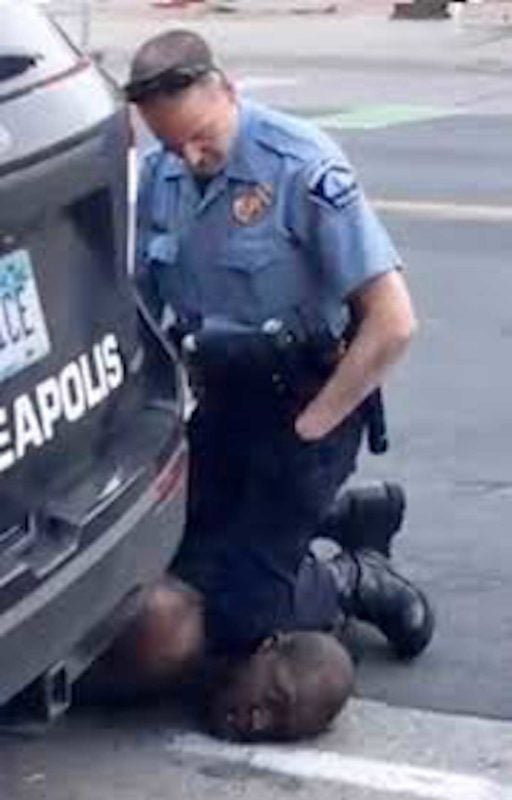 Even after the pleas stop, Officer Chauvin continues pressing his knee into George Floyd’s neck for two minutes and 46 seconds, as though to make sure the human being beneath him is completely lifeless.

For me, the most heart-wrenching moment comes when Floyd calls out for his mother, not once but twice: “Mama.” He knows he is dying, being executed in broad daylight, by a white police officer whose indifference can only be described as depraved. No succor is being extended, and Floyd reverts to the child he once was, seeking the maternal embrace that would protect him against such evil as is now being exercised on his black body.

For in the white racist imaginary, the dark-skinned body is an unwelcome portent of disarray, of chaos, of things falling apart. It is of course a self-fulfilling prophecy. For in the very act of disposing of that perceived threat, of that black or brown body, things do fall apart, and the center, already fragile to begin with, cannot hold.

Understandably, there have been protests all across the country, several of which turned violent. While the turn towards vandalism and looting harms mostly innocent people and small businesses, it reflects, as it has in similar outbreaks in the past—the 1968 riots following the assassination of Martin Luther King, Jr., the beating of Rodney King in 1992—the simmering resentment of communities of color that will not stand by peacefully as their lives are habitually devalued. As Frantz Fanon put it presciently, “When we revolt it’s not for a particular culture. We revolt simply because, for many reasons, we can no longer breathe.”

Hearing that cry for help, reminds us all of Eric Garner, an African-American who in 2014 died on Staten Island due to an illegal chokehold applied by—surprise, surprise—a white police officer. He complained, “I can’t breathe” to no avail. His offense? Selling cigarettes.

The alleged offense of Floyd? Passing off a counterfeit bill as payment for menthol cigarettes.

Floyd was yet another in a list of recent senseless African American deaths: medical worker Breona Taylor in Kentucky—sleeping while black in her own bed, shot by police barging into her apartment; Ahmaud Arbery in Georgia—jogging while black in his own neighborhood, killed by two white vigilantes; and Walter Scott in South Carolina, for driving while black, pulled over for a non-functioning brake light and subsequently fatally shot by a white police officer.

And just recently, Amy Cooper, a white female, called the police on African-American Christian Cooper (no relation), a birder, who had requested her to put her dog on a leash, in an area of Central Park where this is required. Cooper calmly recorded her, telling the 911 operator that an African American was threatening her life. By the time the police arrived, both had gone. Who knows what could have gone down had the two still been there? A white woman complaining about a black man: how many times has that ended tragically for the man?

In the aftermath, though she apologized, Amy Cooper was fired from her management position at Franklin Templeton, an investment firm. Proposals have now been made to criminalize such false reports. And well they should.

I cannot imagine the deep, unrelenting psychic toll the virus of racism has wreaked, and continues to wreak, on African Americans. Sadly, that virus exists in the Filipino-American community, though rarely discussed. To be continued.